While four leisure routes and two Boeing 737-800s barely scratch the surface of its operations, the significance of Ryanair's confirmation today that it will begin flights from Frankfurt Main airport goes much deeper.

It further illustrates, if illustration were needed, the Iow-cost carrier's continued steps into primary airports with its arrival at one of Europe's biggest hubs. It also serves as a statement of intent at Lufthansa's home fortress amid a major expansion by the Irish carrier in Germany, adding to the low-cost carrier inroads in the country already made by EasyJet.

The launch of Ryanair services at Frankfurt Main would have been unthinkable 15 years ago as the airline prepared to open its second mainland European base at Hahn airport. In many ways Hahn came to embody the classic Ryanair out-of-town airport on which it based its hardcore low-cost carrier model – not least because of the high-profile legal challenge by Lufthansa over whether Ryanair could even reference the airport as Frankfurt-Hahn in its advertising.

Ryanair built up its network from Hahn and FlightGlobal schedules data shows it will serve around 30 routes, predominantly to Italy and Spain, this November. But growth at the German airport, at which Wizz Air is the only other scheduled operator, has stalled. After passenger numbers topped 4 million in 2007, year-on-year falls were only arrested last year when passenger levels grew 9% to nearly 2.7 million. Hahn airport's owner, the regional government of Rhineland- Palatinate, is itself in the middle of a fresh attempt to secure new investors after an earlier deal to sell the airport to Chinese parties broke down.

Much has changed since Ryanair first arrived in Frankfurt, not least with the low-cost carrier itself. The Irish airline has embarked on a charm offensive, ditching much of its low-frills image and making moves to cater better for business traffic. That has already seen the carrier launch services at primary airports, in many cases where it was already operating from a secondary airport in the city.

Barcelona, Brussels, Rome, Milan and Warsaw are all places where Ryanair operates at both the city's primary hub, in addition to a neighbouring secondary airport. It has thus far continued to operate at both.

Now it plans to operate flights to Ryanair leisure staples Alicante, Faro, Malaga and Palma de Mallorca from Frankfurt's main airport beginning next summer. That moves Ryanair into new territory. It marks the biggest airport it has so far served – topping Amsterdam, at which it began its first service a year ago – and its first flights from one the big three western European hubs.

Once it launches services from Frankfurt Main, it will mean Ryanair operates from four of Europe's 10 largest airports – and three of the next largest as well. 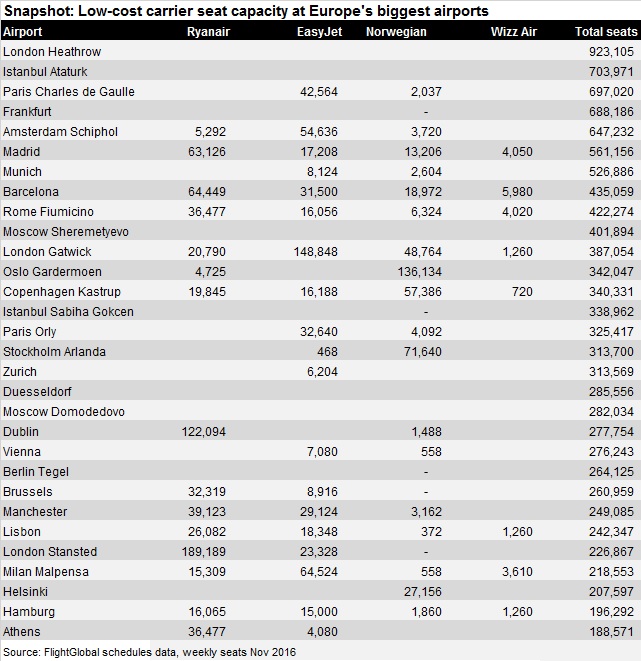 It underlines the expansion of the low-cost carriers into primary airports. EasyJet has already had more of a presence at the bigger hubs – for example, it has long operated from Europe's third-biggest hub Paris Charles de Gaulle, where it is the second-biggest operator in terms of seats.

Frankfurt was among nine of the 30 biggest European airports not served in November by either EasyJet or Ryanair. That includes four airports from Istanbul and Moscow – on the fringes of the carriers' route networks – of which two, Istanbul Sabiha Gökçen and Moscow Domodedovo, have both been served by EasyJet. Another is Berlin Tegel airport, where both EasyJet and Ryanair have sizeable operations at the city's Schönefeld facility. Neither serves Helsinki, although another independent low-cost carrier, Norwegian, does.

Ryanair's move to Frankfurt Main leaves London Heathrow as the last major holdout in western Europe in terms of low-cost carriers. They have thus far built presence across various other London airports – EasyJet is the biggest operator at London's second-biggest airport, Gatwick. But congested Heathrow – with the exception of Lufthansa's Eurowings/Germanwings low-cost airline and IAG unit Vueling's La Coruna service – has remained out of low-cost carrier range.

EasyJet has made it clear that, should a long-awaited third runway be built at Heathrow "with the right charging structure", it intends to start flights from the hub.

The start of services at Frankfurt's primary airport forms part of a widespread German expansion by Ryanair. The Irish carrier has just opened new bases at Hamburg and Nuremberg. FlightGlobal schedules data shows Ryanair will increase its German capacity by more than a third this November compared with the same month last year.

It adds to the growing competitive pressure from low-cost carriers in the market. EasyJet has already built a strong presence in Germany.

German carriers themselves continue restructuring efforts. Lufthansa is embarking on a growth strategy of its revamped low-cost operations, now under the Eurowings banner. Air Berlin is undertaking an even bigger restructuring in a bid to stem losses. That involves focusing on network operations, shedding around three-quarters of its routes and roughly halving its fleet under a plan that also has seen it tentatively agree to wet lease up to 40 narrowbodies to Lufthansa – predominantly for operation by Eurowings.

Moving into Frankfurt Main, though, definitely puts Ryanair firmly in Lufthansa territory. Lufthansa chief executive Carsten Spohr has called on Frankfurt Main to offer it similar terms to those offered to Ryanair. "[Ryanair] managed to achieve something that we, as home carrier, did not achieve over the past years – a significant reduction of airport fees," he said.