Saab is continuing to refine the design of its Gripen Maritime carrier-optimised fighter, as it eyes long-term possibilities for the proposed variant in Brazil and India.

"We have a fully certified design that has been signed off by Saab management for the maritime version of Gripen," says Tony Ogilvy, head of marketing for the Gripen M. "It's in our portfolio, but it is only a design. We have not taken it to the next critical step, which will require a customer."

Ogilvy's background is carrier aviation. During a three-decade career in the UK Royal Navy he flew Blackburn Buccaneers for 12 years and British Aerospace Sea Harriers for six, including from several of the service's carriers. He contends that Saab's model-based systems engineering approach offers a "very high level of fidelity" that should, if a Gripen M customer is obtained, result in a concept demonstrator that works well first time. 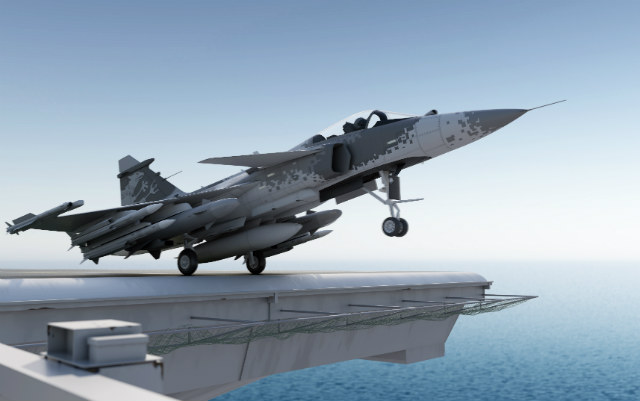 To help refine its design, Saab has consulted with two UK companies: arresting gear specialist MacTaggart Scott and Rolls-Royce Marine, which has experience with catapults.

"We've been working with both companies on separate, smallish contracts to look at modeling ways to improve launch and recovery characteristics, to give us the maximum in both directions, so we can take off with maximum payload and land with safety," says Ogilvy.

In addition to locking down a launch customer, one challenge is weight. The present Gripen M design is 500kg (1,100lb) heavier than a baseline Gripen E, which Saab documents show as having a basic mass empty weight of 8t.

"We're looking at ways of reducing that weight," says Ogilvy. "We hope to get down to no more than 300kg extra."

The extra weight stems from strengthening around the fighter's centre of gravity, where the airframe would be subjected to high levels of energy during catapult launches and arrested landings. The jet's nose-gear oleo strut has also been strengthened, with steel replacing alloy.

Still, the Gripen M, powered by a single GE Aviation F414, would be lighter than other carrier-capable Western jets. The Dassault Rafale – with two Safran Aircraft Engines M88s – has an empty weight of just over 10t, while the figure for the Boeing F/A-18E/F Super Hornet, using two F414s, is 14.5t. Lockheed Martin's short take-off and vertical landing F-35B starts at 14.7t, while the carrier-variant C-model has an empty weight of 15.7t.

"The Gripen's size is a bit like a Sea Harrier," says Ogilvy. "It's not too big, and it fits down every [aircraft carrier] lift in service today. This is a very important point – but one people tend not to think about." The Gripen M would be able to achieve this without folding wings, he adds.

On handling characteristics, Ogilvy notes that the original Gripen design was optimised for rough landings on Swedish roads. Landing on an aircraft carrier involves a comparable low flare approach with a relatively steep angle, he says.

"The undercarriage [of Gripen M] is slightly longer and slightly bigger," he says. "Apart from that and a shrouded hook for arrest and recovery, it is exactly the same aircraft. It will do exactly the same job [as the Gripen E] in every role. When the aircraft is not on the carrier, it is part of the Gripen fleet ashore."

Given that Sweden has no plans for aircraft carriers, the two potential markets for the Gripen M are Brazil and India.

The Brazilian air force has ordered 28 single-seat Gripen Es and eight two-seat F-model examples, being developed with Embraer. Its new fighters will be delivered between 2019 and 2024, including eight single-seaters and seven twin-seaters built in Brazil.

The nation's navy is also interested in replacing its retired aircraft carrier, the Sao Paolo, although this requirement has yet to be fully defined. Should Brazil's plans for such a new vessel gain traction, it could provide an opportunity for the Gripen M.

In India, Saab, Boeing and Dassault have responded to a request for information for 57 carrier-based fighters. India has one STOBAR-configured ship, equipped with RAC MiG-29Ks, and has plans for an additional example. Longer term, it has plans for a more potent CATOBAR carrier, potentially using General Atomics' electromagnetic aircraft launch system, as opposed to conventional steam catapults.

New Delhi has also expressed interest in obtaining an unspecified number of single-engined fighters to replace its air force's obsolete Mikoyan MiG-21s and MiG-27s, with the Gripen E and Lockheed's F-16V as candidates. Recent Indian media reports have suggested that this light fighter contest could be abandoned, although there has been no official confirmation. Regardless of this, a request for proposals linked to the carrier-based combat aircraft procurement is expected to be issued around mid-year.

"We're under no illusions as to the challenge we face, but we are very confident that our design will meet the rigours and requirements of STOBAR and CATOBAR operations," says Ogilvy.