Since the first global alliance was established 20 years ago, these airline groupings have become a central part of the industry and travel offering.

Alliances have matured, from the five carriers that established Star Alliance on 14 May 1997 to the 62 airlines now spanned by Star, Oneworld and SkyTeam.

As Star marks its 20th anniversary, FlightGlobal schedules data shows that carriers in these three alliances account for 57.7% of capacity, in terms of ASKs, in May.

But with this maturity has come a slowing in the pace of airline member recruitment. Only one carrier has joined as a full member of any global alliance in the last three years – and that was the relatively small addition of Avianca Brazil to Star two years ago.

And as the faster-growing low-cost carrier sector remains outside these alliances – and the restructuring and retrenching of several networks of carriers within them continues – the capacity market share of these alliances has actually fallen from almost 60% in September 2015.

However, moves to grow the alliances – and address existing white spots through the development of affiliate membership options – continue. Indeed, Star has now confirmed that Chinese carrier Juneyao Airlines has completed the integration process for it to join up under Star's new Connecting member programme.

Global alliances have provided, and arguably helped, drive deeper consolidation and co-operation within the industry, helping to spawn many of the joint ventures now in place across key markets. While these do not operate exclusively on alliance lines, many of them do draw on existing partnerships from within the global alliances.

Air Canada, Lufthansa, United Airlines, Thai Airways and Varig – the Brazilian carrier one of several carriers to have left alliances, either of their own accord or through their demise – were the first to show their hand in establishing the Star Alliance in May 1997.

Little more than a year later, partners American Airlines, British Airways, Canadian Airlines, Cathay Pacific and Qantas established the Oneworld alliance. Canadian Airlines was to prove only a brief member – within two years it was Star-bound after its merger with Air Canada – but Oneworld had been bolstered since 2000 with Aer Lingus, Finnair, Iberia and LAN Airlines.

Star too continued to recruit. All Nippon Airways, Air New Zealand, Ansett Australia – albeit briefly – and Singapore Airlines were among the early additions.

Singapore joined after ditching its role in the Global Excellence three-way alliance it had been in with Delta Air Lines and Swissair. Two years later the Atlantic Excellence partnership was dissolved when Delta quit after agreeing a co-operation with Air France. That proved the precursor to the creation, in 2000, of SkyTeam – established by Air France and Delta with Aeromexico and Korean Air, and swiftly joined by Alitalia and Czech Airlines.

Over the following years, membership of all three groupings has continued to swell. Star has always been the largest alliance in terms of members – it has 28 airlines today. SkyTeam has 20 airlines and Oneworld 14 full members.

Most of the more recent recruitment has focused on emerging markets – Asia-Pacific, Latin America and the Middle East – with limited new member activity in maturer markets. Air Berlin was the last new European member, joining Oneworld five years ago, while moves by North American carriers – such as US Airways' switch to Oneworld – have been aligned to consolidation in the country.

All continents are covered, and almost every major country, by at least one of the alliances – the most notable absentee, India, being addressed when Air India's protracted membership of Star finally came to fruition in 2014.

"We will never say no, but we are pretty comprehensive in our network today," said Star chief executive Jeffrey Goh when asked by FlightGlobal about the prospect of adding the alliance's ranks, during a media event in Frankfurt marking the 20th anniversary of the grouping.

This echoes similar comments from the other two alliances. "Although there are a few regions where we are interested in building our presence further, with few of the sort of airlines that Oneworld has traditionally targeted as potential candidates now available the scope for adding recruits along the lines we have done in the past is limited," said Oneworld chief executive Rob Gurney at the Aviation Club in London in February.

"At SkyTeam we are not out there actively recruiting members. Its not how it works," SkyTeam chief executive Perry Cantarutti tells FlightGlobal, noting airlines make a case for alliance membership, then look to which alliance might make sense for them. He adds there are not many opportunities - in terms of traditional full alliance member carriers - out there. And like his counterparts at Oneworld and Star Alliance, Cantarutti believes SkyTeam has good coverage with around 80-90% of key business markets.

But despite their wide coverage areas, each alliance has markets where it have struggled – or continues to struggle – to make its mark.

In India, for example, neither Oneworld nor SkyTeam has an airline partner – the former having initially lined up Kingfisher Airlines prior to its collapse. Oneworld also lacks a partner in another key Asian market – mainland China. Hong Kong carrier Cathay Pacific has been a member from the outset, but the major Chinese carriers have been recruited by SkyTeam and Star.

Neither does Oneworld have a full member in Africa – though BA franchise partner Comair gives it an affiliate member in South Africa. By contrast, Star has three African members and SkyTeam has Kenya Airways.

Brazil was also a market where Oneworld struggled, until TAM was tempted over through its merger with long-time Oneworld operator LAN.

That, in turn, dealt another blow to Star in the country, where the alliance had already lost one partner airline with the collapse of Varig. Star has since turned to Avianca Brazil – sister carrier to existing member Avianca – and has been courting Brazilian low-cost operator Azul.

SkyTeam also lacks a full Brazilian partner, though several of its members – including Air France-KLM and Delta – have co-operation deals with Gol.

In Russia, SkyTeam is served by Aeroflot and Oneworld by S7, but Star has no member. "If you look at Russia, clearly we have a white spot there," acknowledges Goh. "But are there any airlines that make sense to be a member of Star Alliance?"

Faced with little prospect of securing a home carrier in a market, all three alliances have made much of the access and service their existing members can provide. "If you take the market of Australia, we don’'t have a member in Australia, but we are so well served by many of our established members – Air New Zealand; Singapore; Air China has just announced a spate of flights into Australia," says Goh.

That lack of traditional options also reflects the blurring nature of the industry. The lines of demarcation between network and low-cost carriers were clear when the alliances were established. Key areas of co-operation around IT systems, codesharing, lounges and frequent-flyer programmes were anathemas to budget-sector operators.

As a result low-cost carriers, alongside Gulf carriers Emirates and Etihad, are among the most notable of the world's biggest carriers not to feature in the global alliances. 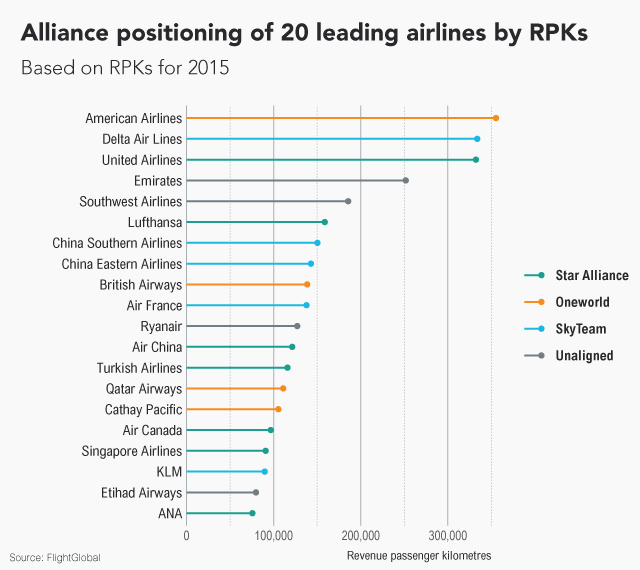 Those lines between modesl have since blurred, however – at least in terms of co-operation between the two – amid changing models and LCCs' increasing share. SkyTeam carriers' co-operation with Gol, for example, both reflects the Brazilian carrier's move towards catering for business traffic and its strength in the market – it became the biggest carrier in its home domestic market for the first time in 2016.

Aware of the changing market conditions, all three alliances have been working on new affiliate-membership options aimed at accommodating strong local players without a need for full membership.

"What we have today is our connecting-member model which we announced last year that now gives us the flexibility to address local and regional areas, where we do not necessary require a full-service carrier to be part of the alliance," says Goh.

Shanghai-based Juneyao Airlines has now completed the integration process and will this month become the first carrier to join as a connecting member. "We are proud to be back in Shanghai," Goh told an audience of Star executives and frequent flyers at a dinner marking the alliance's 20th anniversary. Star had originally counted Shanghai Airlines among its ranks before the carrier followed partner China Eastern into SkyTeam.

Such schemes provide the potential for low-cost carriers to play a role of some kind with the global alliances. Multi-model operator Air Berlin has thus far been the only airline with a low-cost background to enter an alliance – and, after shedding its leisure and low-cost activities in the course of several restructurings, the Oneworld carrier is now pitching itself fully as a network airline.

"If any low-cost carriers is going to be part of any global alliance, it will have to be a strategy pretty similar or corresponding to our connecting-partner model. We have designed this model in a way which caters to be able to accommodate that segment of the industry."

Indeed, South African Airways' low-cost unit Mango was originally to be the first Star Connecting partner – though that has not yet progressed amid management changes at the carrier.

Oneworld's Gurney also recognises a need to be open to working with different types of carriers. "There are some markets where they have skipped a cycle, and if we want to have a partner that's operating in those markets we have to rethink how we collaborate with them," he says. "Now we do collaborate with a number of airlines already that operate hybrid or LCC platforms, and we've had some success in that, but we have to look to all opportunities."

Likewise Cantarutti at SkyTeam sees the need for a more flexible approach. "There’s clearly an emerging set of carriers we would typically consider LCCs but that are becoming more full service in their operation," he says, noting the alliance is prepared to engage with this type of carrier, but the structure around it remains flexible.

"We have an open mind. In the future candidates are likely to be different then traditional airlines and we need to have a flexible approach to membership structure," he says.

Amid the changing mission of alliances, all three have seen new leaders take the helm in the last year. Cantarutti took over of SkyTeam last September, Gurney took office at Oneworld in October, and Goh succeeded Mark Schwab as Star Alliance boss at the start of the year.

All three have put the emphasis on improving the traveller experience across members, especially through the use of technology.

SkyTeam rolled out an online, retroactive credit tool to make it easier for frequent flyers to keep their account balances up to date. A similar initiative was among those outlined by Star as its unveiled its planned direction over the coming years.

"Today, if you travel on, say, a Lufthansa flight and connect to a Singapore Airlines flight, you may well be able to seat-select on the Lufthansa app on the first flight, but you are very unlikely to be able to select your seat on the second.

"We are moving in the digital direction. That is the new norm, and that is what the customer expects."

Cantarutti notes this latest mission marks a third phase of the alliances.

"The role of alliances has been important. But it has also changed. In the early days it was all about network connectivity and putting more dots on the map. That has morphed," he says. That moved towards more customer facing initiatives Cantarutti says, citing things like lounges or his own alliance's SkyPriority initiative to improve service for SkyTeam carrier customers at the airport.

"We are now into the more nuanced technical challenges airlines face," he says of the latest phase, noting this tackles some of the more complicated and invisible tasks need to make seamless travel possible across an alliance.

“Customers may not even be aware of it – something like the challenges of issuing a boarding pass for the full journey at origin across different members. We are very focused on being able to deliver that connectivity across the alliance," he says.