The UK’s role in the coalition efforts in the Middle East over recent years has led the country to become an operator of a number of discriminating technologies, in particular an armed version of the General Atomics Aeronautical Systems MQ-9 Reaper UAV. The UK operates a 10-strong fleet of Block 1 variants, and had the privilege of being only the second nation after USA to be authorised to fly armed versions of the type.

While the Royal Air Force’s role in segregated offensive operations has been and remains a key reason why it maintains a capable fleet of Reapers, there is a shift in the UK’s priorities. It is now acquiring a replacement that will be able to fly in civil airspace, which is an apparent move to expand the operational capability of its unmanned systems.

In 2016 the Royal Air Force selected what was then referred to as the Certifiable Predator B for its Protector programme that sought to replace the Reaper. General Atomics has since renamed the new variant as SkyGuardian. The type will be capable of flying for more than 40h at speeds of 210kt, reach altitudes of some 40,000ft, and carry 4,750lb (2,159 kg) of external payload, including armaments.

The UK is the launch customer and, so far, the only country to order SkyGuardian.

The RAF has not yet announced the planned weapon fit for this Protector fleet, but it has previously expressed a desire to integrate it with UK-developed weapons including the MBDA-manufactured air-to-ground Brimstone missile and the Raytheon UK Paveway IV laser-guided bomb. This is a move towards a more sovereign fit for its UAVs, rather than the US-operated configuration that was adopted for the Reapers.

Once fully certified, the Reaper-derived system will be capable of flying in national airspace alongside manned equivalents in accordance with NATO STANAG 4671, which if achieved will make it the first UAV in this category to do so. 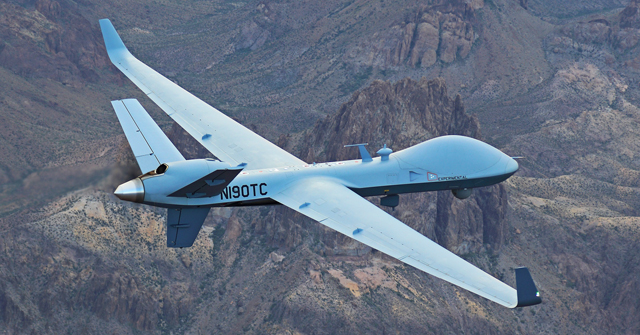 In March 2018 is was announced that the so-called Protector Combined Test Team (CTT) comprising RAF pilots, sensor operators and engineers, plus industry partners and the US Air Force, were due to carry out test and evaluation of the system in the USA. At the time the RAF said that 16 aircraft were initially to be acquired, adding that the CTT would serve to ensure that Protector complied with national and international regulations.

“It will be the first aircraft of its kind to be certified in this way, allowing it to operate safely and effectively in a wide variety of environments and locations, including support of humanitarian relief operations,” the RAF said.

Development of the UAV is continuing at a quick pace, with the aircraft having demonstrated a satellite communications-only launch and recovery in December 2017. It also carried out a 48h flight in May 2017 – which the company describes as an industry record – while it also conducted a Federal Aviation Administration-approved flight in August 2017 in national airspace, which was the first by the FAA for a UAV.

During this it flew from the Yuma proving ground in Arizona to the company’s Gray Butte facility in California without the use of a chase aircraft.

While an initial 16 will be manufactured for the RAF, the possibility of operating up to 26 examples has long been touted by the service.

In April 2018, General Atomics announced that it had been awarded an $81 million Foreign Military Sales contract relating to integration and component-level testing of specific features that will be integrated on to the UK aircraft.

By early June 2018, the SkyGuardian is expected to achieve a number of further qualification milestones including lightning protection tests, and the company says the development and testing schedule remains on track.

Air Marshal Julian Young, chief of materiel (air) at DE&S, said in a statement: “The UK MoD and RAF are pleased with the progress of their MQ-9B Protector programme and work continues at pace on the certification aspects of this platform, ahead of achieving a full Military Type Certificate as the platform enters service.

“Recently reported Protector procurement schedule adjustments reflect the UK government managing the transition between getting the most out of our current Reaper aircraft, which is helping us defeat Daesh in the Middle East, and moving to the cutting-edge Protector.”