Sixteen years after signing up as a Level 1 partner on the US military's Joint Strike Fighter programme, the UK is now just months away from welcoming its first examples of the Lockheed Martin F-35B to home shores.

Thirteen of the short take-off and vertical landing (STOVL) type have now been handed over to the UK military, with this total to increase to 14 by year-end.

Ten aircraft are being used in support of pilot and maintainer training at MCAS Beaufort, South Carolina, with Royal Air Force and Royal Navy personnel working alongside the US Marine Corps' VMFAT-501 squadron. Three more are assigned to the UK's 17 Sqn operational evaluation unit at Edwards AFB in California, where its pilots are conducting operational testing, and developing tactics, techniques and procedures for the fifth-generation type. 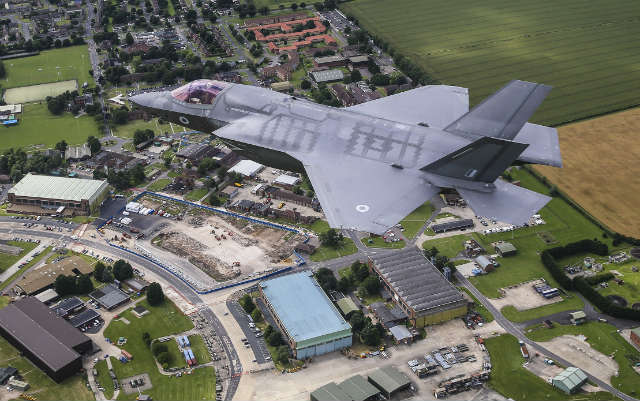 Meanwhile, infrastructure work at RAF Marham in Norfolk – the future home base for the UK's Lightning IIs – has reached a key stage, under an investment worth more than £500 million ($672 million), launched in April 2016. Current work includes a complete resurfacing of the shorter of the base's two runways in advance of the new aircraft arriving, with the main runway to later undergo the same process. Three vertical-landing pads are at the start of their construction process.

A new maintenance and finishing facility is already built, and will be capable of accommodating up to eight F-35Bs simultaneously for in-service support, plus another two in painting. Nearby, the UK's national operating centre has been completed, with Lockheed's autonomic logistics information system equipment to be installed from late November. The facility will open early next year.

The squadron house for the RAF's 617 Sqn – the first UK frontline unit to introduce the Lightning II – is also in construction, along with another for the 207 Sqn operational conversion unit (OCU). An integrated training centre will from the middle of next year receive four full-motion simulators and additional training equipment.

Elsewhere, 1980s-era hardened aircraft shelters built for the Panavia Tornado will be refurbished, and about 90% of existing taxiways resurfaced – all without disrupting operations involving the RAF's remaining Tornado GR4s. To leave use in April 2019, the type has a key role in the UK's Operation Shader activity against Islamic State militants in Iraq and Syria, being flown from RAF Akrotiri in Cyprus.

UK Lightning force commander Air Cdre David Bradshaw – who also commands the RAF's Tornado operations – says the transition between the different generations of aircraft must be a seamless one.

Nine F-35Bs will arrive at RAF Marham in mid-2018, after making a transatlantic crossing accompanied by Airbus A330 Voyager tanker/transports. The STOVL aircraft will support the work-up process for the reformed 617 Sqn, which should achieve initial operational capability next December. Bradshaw says the unit will be cleared to deploy on international operations from early 2019, with its Block 3F software-standard aircraft having a UK-specific weapons fit comprising Raytheon Systems Paveway IV precision-guided bombs, plus MBDA ASRAAM and Raytheon AIM-120 AMRAAM air-to-air missiles. Later, Block 4 additions will include MBDA's Meteor beyond-visual-range air-to-air missile and its extended-range Spear ground-attack weapon.

Bradshaw says 2018 "is going to be momentous", noting that the new type's introduction will occur during the centenary year of the RAF's formation. The F-35B will, however, be a shared asset in UK service.

"This is a joint enterprise: at every level, every rank, every trade, there will be a mix," Bradshaw says. The balance is set at 58% RAF personnel and 42% RN, with the senior and deputy command posts to always be held by officers from the services in that order. Frontline squadron leadership posts will, however, alternate between the services on each staff rotation to enforce the joint ethos.

Nowhere will this be more evident than at sea, with the F-35B to combine with two new RN aircraft carriers to reinstate the UK's carrier strike role: lapsed since the early retirement of the Joint Force Harrier-operated BAE Systems Harrier GR9. 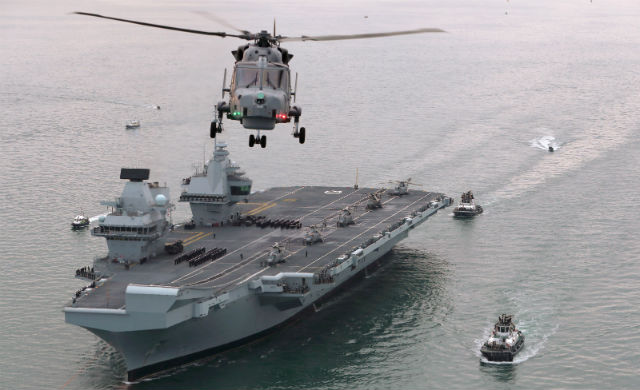 The RN's new flagship, the HMS Queen Elizabeth, will be commissioned by her namesake in Portsmouth on 7 December. The 65,000t vessel will go on to host the first landings by an F-35B in the second half of 2018, during trials conducted off the US East Coast. Further testing will be conducted in 2019 using the HMS Prince of Wales, which will be delivered with a so-called Bedford Array system installed, enabling pilots to employ a shipborne rolling vertical landing (SRVL) technique. This will reduce wear and tear on the F-35's Pratt & Whitney F-135 engine and LiftFan vertical landing system, and enable the aircraft to return to the ship at a heavier weight.

"By the end of 2020, the F-35B will be operational off the aircraft carriers," Bradshaw says. "It is at the very heart of the Lightning force to operate from land or sea – we will pick what is most appropriate at the time."

Capt Adam Clink, deputy Lightning force commander, notes that the use of SRVL will restore a "big-deck" carrier capability not seen since the HMS Ark Royal left service in 1979. "It is a significant change from a ship safety point of view," he notes.

The UK has so far committed to acquiring 48 F-35Bs for delivery by 2024, under an allocation totalling £9.1 billion. However, the nation's formal requirement over the life of the programme remains for 138 aircraft.

In addition to the 14 aircraft in its fleet by year-end, its firm backlog totals another three examples, ordered last year as part of the US programme's 10th lot of low-rate initial production (LRIP).

In written evidence submitted to the House of Commons Defence Select Committee in mid-November, Lockheed said the unit recurring flyaway cost for the UK's early F-35Bs has dropped from $161 million during LRIP-3 in 2009 to just over $122 million in LRIP-10: a fall of 24%. Its target is to reduce this to $105 million by the time of an LRIP-14 award.

Lockheed and several international customers – including the UK – are in favour of the US Department of Defense agreeing to a multiple-year contract for a total of 440 aircraft through LRIP lots 12 to 14, to benefit from cost savings ahead of the programme entering full-rate production. The proposed three-year deal remains the subject of discussion between Lockheed and the F-35 Joint Programme Office.

The UK currently plans to order 17 aircraft through this period, after a single unit during LRIP-11. Another 13 would be added through a proposed second multiple-year arrangement covering orders in 2021-2022.

About 150 UK Lightning force personnel are currently in the USA, including pilots, engineers and mission support specialists. At MCAS Beaufort, the detachment represents "the kernel of what will become 617 Sqn", Bradshaw notes.

The UK's F-35 pilots hail from the RAF's Eurofighter Typhoon and Tornado GR4 communities, and the former Joint Force Harrier organisation. Clink notes that the RN has maintained skills following the Harrier GR9's retirement via a long-lead specialist skills programme which saw its pilots take exchange posts flying Boeing F/A-18E/F Super Hornets with the US Navy.

In a significant milestone, the first of four ab initio pilots – two RAF and two RN – was expected to perform a debut flight in the F-35B around late November. The first UK aircraft to receive Block 3F software has already been flown from Edwards AFB, and ski-jump testing has been completed at NAS Patuxent River in Maryland, where the UK has four test pilots assigned to an integrated test force.

Development of a training syllabus has established a 50:50 split between live and synthetic flying – a shift which Bradshaw describes as "a completely different approach".

"In the past, all of our training would have been airborne, with emergencies in the simulator," he notes. "We are trying to make sure that we get the absolute most out of this aircraft."

The Lightning force OCU will move to RAF Marham in mid-2019, followed by a second frontline unit – 809 NAS – in 2023. Longer term, a third combat squadron could potentially be accommodated at the Norfolk base.

With the UK planning to operate F-35s until at least 2048, Bradshaw says it is likely to also consider acquiring the Lightning II in its conventional take-off and landing variant. This has increased range and payload capability, increased manoeuvrability and a lower unit cost than the STOVL type.

"I'd be really surprised if the A is not part of our future force mix," he notes.