United Airlines is growing. The carrier has upped system growth to as much as 3.5% this year, with its domestic available seat miles jumping by as much as 4.5%.

Hawaii has emerged as an unlikely beneficiary of some of that growth. United will add a slew of new frequencies to the popular leisure destination and shift a number of routes to year-round status beginning in December. 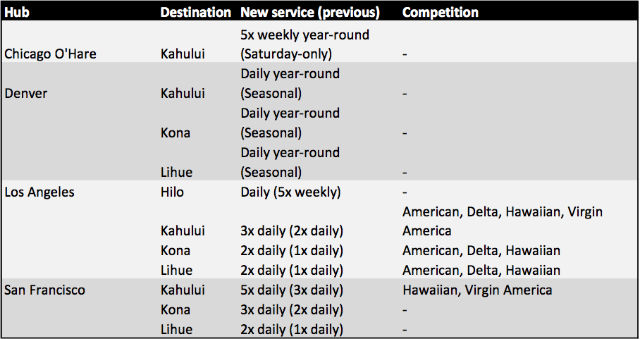 The additional Hawaii service, which is focused on Hilo, Kahului (Maui), Kona and Lihue, will begin on 20 December. The additions are already included in United's capacity guidance for 2017 but will impact 2018 capacity when annualised.

Additional domestic service is expected from United. Scott Kirby, the carrier's president, and other executives have repeatedly emphasised that it is working to reclaim what they deem its rightful domestic share. Their strategy to do this is to fly the right aircraft in the right markets, for example moving to dual-class regional jets or mainline aircraft from 50-seat jets on routes to medium- and large-sized markets, and increasing connections to smaller cities that produce higher yields.

This is where Hawaii stands out. It is not a new regional point where United can command high yields, nor is it a major – or even medium-sized – destination where it needs to shift to larger aircraft. The islands, due to their distance from the US mainland, already have all-mainline service and benefit from stiff competition from the likes of Alaska Airlines, American Airlines, Delta Air Lines and Hawaiian Airlines.

"Hawaii fits perfectly into United’s domestic route network – all of our hubs not only are in cities with significant Hawaii traffic but also are ideally geographically situated to connect customers from other points," says a spokesman for the airline. "[For example], our SFO and LAX hubs are the largest industry connecting points to Hawaii and we feel DEN is an optimal connecting point for Midwest and Rocky Mountain region customers from primarily from small and mid-sized cities without direct access to west coast gateways."

Without commenting directly on how United expects the new service to impact yield, he notes that "overall visitation and tourism related spending are at record levels" for Hawaii.

United will expand its leading share of the market between the US mainland and Hawaii with the capacity additions, current FlightGlobal schedules show. Comparing first quarter data for 2017 and 2018, the carrier will capture nearly a percentage point of additional share in the market, rising to 26.4% from 25.6% of seats. 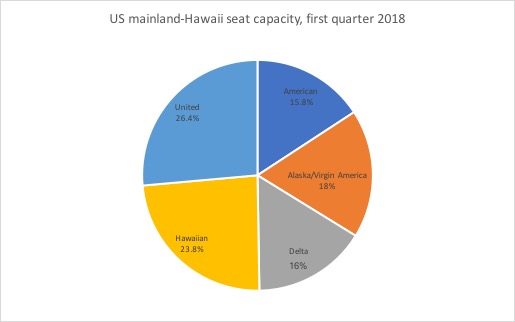 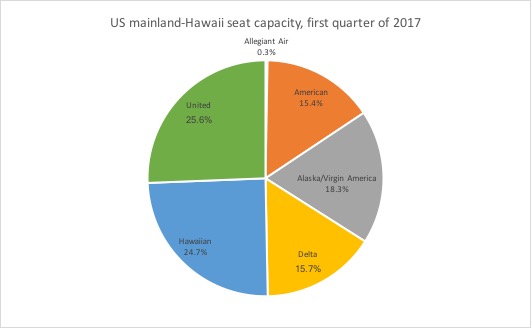 The airline's expanded service to Hilo, Kahului, Kona and Lihue will drive a 13.5% increase in its seats in the US mainland-Hawaii market in the first quarter of 2018 compared to this year, schedules show. The market is forecast to grow 10% during the same period.

Hawaiian, the number two carrier between the US mainland and Hawaii, is scheduled to increase seats by 6.3% year on year in the first quarter of 2018, the data shows. Despite this, its number two position in the market will shrink by nearly a point to 23.8%.

The capacity data is subject to change as airlines update their schedules, including possible responses to United's growth.

One expected change to first quarter 2018 schedules will be the entry-into-service of the 189-seat Airbus A321neo at Hawaiian. The airline plans to use the narrowbody to replace some of the widebody aircraft it flies to the US mainland, as well as expand service between the outer Hawaiian islands – namely Kahului, Kona and Lihue – to California and other points.

"We have a lot of confidence in our superior product and service," Peter Ingram, chief commercial officer of Hawaiian, tells FlightGlobal. "In fact, this is already reflected in our revenue outperformance in recent periods relative to our competition generally and United in particular."

Ingram's comments echo those made by the Honolulu-based carrier's chief executive Mark Dunkerley when commenting on new competition to Hawaii from Asia earlier in June: "We like our formula for serving Hawaii better than the formulas of any other carriers. We've got a combination of service, product and cost which appeals to the Hawaii visitor."

"We are growing our Hawaii footprint in response to increased demand," says a United spokesman. "Our route network is uniquely situated to carry both hub based and connecting customers more efficiently than any other carrier."

United's additions also follow an expansion by Alaska and its subsidiary Virgin America. The Seattle-based carrier will add a new service between San Francisco and Kona in December, competing directly with its legacy competitor.

“We need to be more disruptive in the marketplace,” said Oscar Munoz, chief executive of United, in April 2016. These Hawaii additions, and the domestic capacity growth as a whole, certainly fit with this aim.