The US government's latest air travel security measures could impact nearly 18,000 daily passengers travelling on some 50 routes to the USA from 10 foreign airports, according to schedule data reviewed by FlightGlobal.

The US restrictions, which take effect 25 March, prohibit passengers travelling from the ten cities in Africa and the Middle East from carrying a range of electronic devices in aircraft passenger cabins, according to the US Department of Homeland Security (DHS).

Passengers on affected flights must pack those devices in checked luggage, the agency says.

The restrictions on electronics will be in effect until 14 October, says Dubai-based Emirates Airline, one of the carriers affected.

Those airports were chosen "based on the current threat picture", says the DHS. The ban does not affect international flights originating in the USA, says the agency. 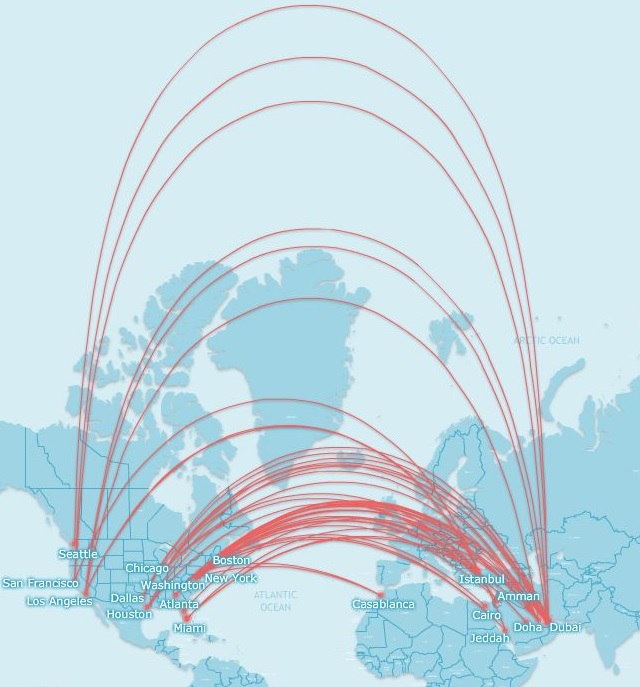 Though the requirements effect only ten cities, they encompass most flights from an entire region and include hubs operated by carriers that in recent years have expanded aggressively in the USA.

Many of those airlines operate multiple daily flights to the USA.

The restrictions also have outsized impact on Turkish Airlines, which serves nine US cities and carries some 3,100 seats daily to the USA. 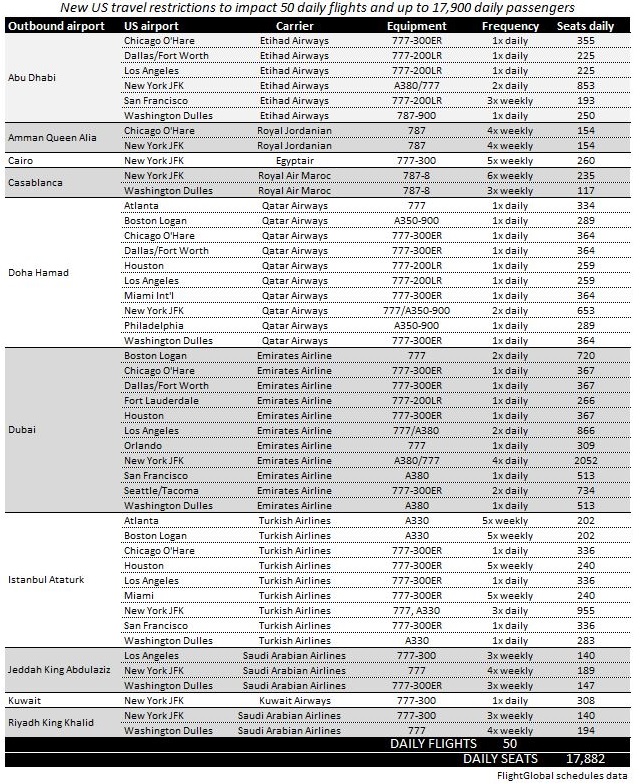 The news, which broke 20 March before being officially announced by US officials, appears to catch carriers by surprise, but the industry is now reviewing the measures and informing customers.

"A number of IATA's member airlines have been contacted by the US Transportation Security Administration with regards to restrictions on electronic items that can be carried onboard flights to the US," says IATA in a statement. "IATA is working with its members and the TSA to achieve greater clarity on required actions."

The TSA sits under the Department of Homeland Security.

Qatar Airways, Royal Air Maroc and Kuwait Airways did not immediately comment, and it remains unclear how the security changes will impact airport and flight operations.

DHS made the security changes after receiving new intelligence indicating "terrorist groups continue to target commercial aviation, to include smuggling explosive devices in various consumer items", the agency says in an information document.

"Disseminated propaganda from various terrorist groups is encouraging attacks on aviation," it adds. "Terrorist propaganda has highlighted the attacks against aircraft in Egypt with a soda can packed with explosives in October 2015, and in Somalia using an explosives-laden laptop in February 2016."

"We have reason to be concerned," DHS says, adding the measures are based on newly-received intelligence without elaborating.

On 31 October 2015, an Airbus A321 operated by Russian carrier Kogalymavia's MetroJet brand crashed shortly after departure from the Egyptian resort destinations of Sharm el-Sheikh, enroute to St Petersburg, killing 217 passengers and seven crew.

Investigators suspect an explosion brought down the aircraft.

Then on 2 February 2016, a Daallo Airlines A320 made an emergency landing at Mogadishu after an explosion ripped a hole in the fuselage.

Investigators believe a bomb inside a laptop computer caused the explosion, which killed only the suspected bomber.

In 2014, TSA announced that officers would start asking passengers on some US-bound flights to power-up their devices – proving that they work – before boarding.

The latest electronic restrictions are being rolled out against a backdrop of uncertainty on air travel to the USA from the Middle East. In recent weeks, US courts have challenged President Donald Trump's revised order to block entry into the USA by nationals of six Muslim-majority countries.

Three of the nine airlines that will be affected by the new electronics rules are also currently embroiled in a heated dispute with the three major US carriers Delta Air Lines, American Airlines and United Airlines. The US airlines accuse Emirates, Etihad and Qatar Airways of benefitting from billions in state subsidies, an allegation denied by the Gulf carriers.