ANALYSIS: Why Global 7500 is key to Bombardier's future

At entry into service, any new aircraft is the apple of its manufacturer's eye, and from that perspective the Bombardier Global 7500 is no different.

But over the past 12 months, the success of the ultra-long-range business jet – each with a list price of $72.8 million – has become even more vital to the Canadian airframer.

First came the loss of control of the CSeries programme, ceded to Airbus in July 2018 and renamed the A220. Then came the announcement that Bombardier was selling its Q400 turboprop line, with the future of the CRJ also under review.

Take away those programmes and the company's future becomes much more tightly wedded to the business aircraft market.

The company's reliance on business aviation can be seen in its 2018 results. The aerospace division – comprising aerostructures, business aviation and commercial aircraft – brought in revenue of $8.69 billion last year, of which business jet sales contributed $4.99 billion and commercial $1.75 billion, with EBIT before special items at $420 million and -$157 million, respectively.

And bear in mind those figures do not incorporate the full effect of CSeries deconsolidation, and have only one Global 7500 delivery included.

With that financial position as a backdrop, it is easy to see why securing a successful service entry and production ramp-up for the 19-passenger flagship is vital.

If further evidence of the programme's importance were needed, Bombardier's recent acquisition of the wing manufacturing operation for the twinjet from Triumph Group provided just that.

Purchased in late January for a "nominal fee", fabrication of the 31.7m (104ft)-span wings will transition to Bombardier's aerostructures unit, where it joins a similar operation focused on the A220.

As well as providing extra business for the division, it helps secure the production ramp-up of the range-topping Global.

"The wing acquisition is one of the areas that makes us a lot more comfortable about the long-term ramp-up," says Stephen McCullough, vice-president of engineering and product development for the Global 7500 and 8000. 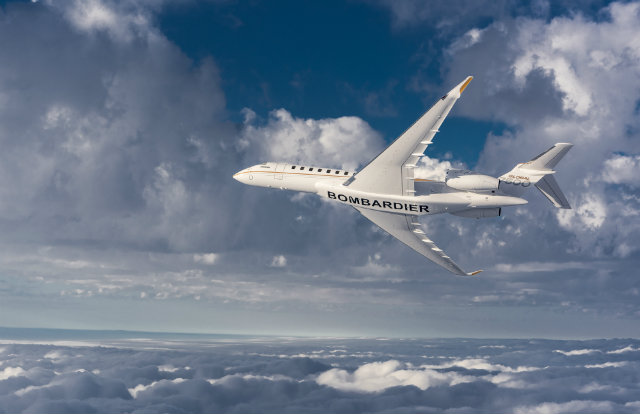 Bombardier had no issues with Triumph's output, acknowledges McCullough, and says the company is "excited" by the acquisition, pointing to the wing-building expertise it already has.

To maintain the ramp-up plan – 15-20 deliveries this year, and 35-40 in 2020 – the airframer has been conducting rate-readiness studies over the past three years.

That is simply best practice, of course, but the need for such preparedness has been heightened by the pressure felt throughout the aerospace supply chain as output on programmes such as the Airbus A320 and Boeing 737 Max are taken to record levels.

Power on the Global 7500 is delivered by Passport 20s supplied by GE Aviation, which is being kept more than busy elsewhere by its involvement in the CFM International narrowbody engine joint venture.

But, says McCullough, Bombardier is yet to see any pinch-points from that side. "One advantage that we have is that we have a purpose-built engine for our programme," he says.

"We are not sharing a common part with another aircraft – that helps a little bit."

In addition, the main fuselage is supplied by Airbus-owned Stelia, which has its hands full with the parent company's airliners. "It's the first large, non-Airbus programme that Stelia has undertaken and they are keen to make it a success. They are invested in the programme as much as we are," says McCullough. 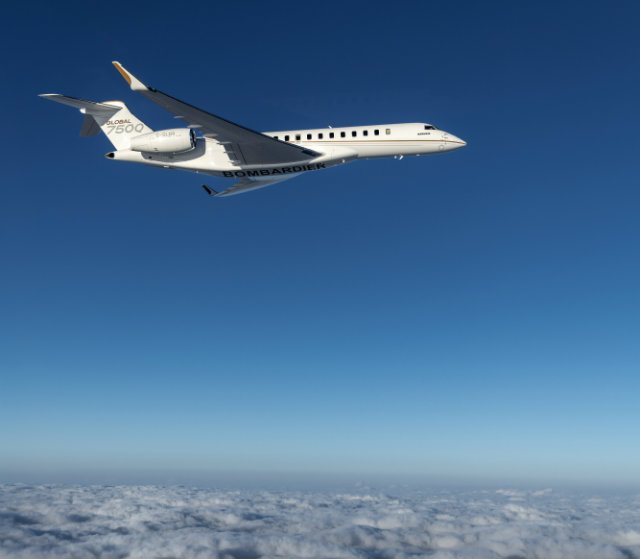 Although the initial production Global 7500 was delivered on 14 December last year, the jet remains with Bombardier and is being operated as a customer demonstrator under a lease-back arrangement.

Outfitted in a 15-passenger layout, the passenger cabin of that aircraft is divided into four zones, including a dining area, entertainment section and a bedroom. It also features two pairs of Bombardier's new Nuage seats, which recline into beds, and a cabin control system developed in collaboration with Lufthansa Technik.

While most buyers so far have selected fairly typical club seating towards the front of the aircraft, "as you move further back it gets very, very diversified", says Stephane Loubert, senior director of programme completions for the Global 7500.

"We have got a couple of eight- or 10-[passenger layouts] where customers have gone a little creative."

Loubert runs the Global 7500 completions centre at Bombardier's Dorval plant, which receives the green aircraft from the Downsview assembly line near Toronto.

His team has been involved with the twinjet since its inception, he says, which has meant the process is "much more integrated than it could have been".

For example, McCullough says that high levels of customer feedback have helped to shape the design of the new flagship, even down to the larger cabin windows.

These were identified as a must-have feature from the beginning and "we modified the structure around that", rather than letting the requirements of the fuselage dictate the shape and size of the windows.

Bombardier is staying silent on the likely output for 2021, but says that its next available production slot is not until the following year, with the firm backlog "a bit higher" than 110, says McCullough.

That annual delivery quantity of around 40 aircraft per year is "roughly stable" says McCullough, but he adds: "If you look at other product lines then the rate can go a little bit higher than that for sure." Bombardier has achieved shipments of up to 55 per year for similar-sized jets, he says, so "we have a bit of headroom above 40."

Canadian type certification for the Global 7500 was granted in September 2018, following a 23-month flight-test effort using five prototypes. US certification has also been achieved, with European approval arriving on 6 February.

That predictive maintenance facility should allow the correct parts and technicians to be on site when the aircraft lands, improving reliability and reducing downtime.

"We have already done it with the demonstrator and we are putting it into place for production aircraft," says Godon.

Meanwhile, as ramp-up progresses, Bombardier is waiting for a likely competitive response from long-time rival Gulfstream.

McCullough points out that with the Global 7500 possessing the longest range and largest cabin of any purpose-built business jet, "we fully expect [Gulfstream] to come and try to pick away at that with a new product".