OSM Aviation has been described as the "lever" by which European budget carrier Norwegian manages to throttle the business up and down. Indeed, the airline found its fellow Oslo-based business so crucial to its model that in September 2015 it acquired, via its Norwegian Air Resources Holding subsidiary, a 50% stake in the outfit. In its five years of existence it has expanded dramatically and now counts operators such as Finnair and Emirates among its clients.

For many, OSM Aviation will remain something of a mystery, though. At first glance, it appears to be just another employment agency or crew management business, but on closer inspection, there are crucial differences.

However, before exploring these, some context: OSM Aviation is part of a larger concern, OSM Group.

That business started out in the 1980s supplying crews in the maritime sector. Its founders took the view that the model prevalent at the time – whereby if a ship's owner sold up, the crew was laid off – was bad for all concerned, particularly seafarers, who ended up with no "predictability" to their employment.

Instead of a direct relationship with the ship owner, crews were instead recruited by OSM Group. When one contract came to an end, they would be moved to a new position aboard another vessel. It was a simple but effective model, the company found, generating a staff retention percentage in the high 90s.

Fast-forward to 2013 and the company saw a similar, although not identical, situation in the aviation market, and OSM Aviation was born.

There since day one, Espen Høiby still leads the business as chief executive. Høiby is a 30-year veteran of Nordic carrier SAS; having held positions in the airline including Airbus A340 captain and operations chief at its Norwegian division, he feels he understands the "inefficiencies" inherent in the market.

He points to the highly cyclical nature of recruitment in the sector (although it is not unique in this respect) where staff are brought on during the good times and then let go as the industry dips again. A related phenomenon can be seen on an annual basis, he notes, where airlines end up carrying a 30% staff surplus as they head into the usually slower winter period. Added to this is the concept of seniority, which can tend to tie a pilot to a particular carrier throughout their whole career.

"I didn't think it was a good model for employees," says Høiby. "We needed to find a sustainable model that was good for both employees and operators. We needed flexibility and to be more efficient."

In addition, at the time, he observed lots of temporary pilots working on short-term contracts. "We didn't believe that was a sustainable model either."

His view was that OSM Aviation needed to "take the risk of employing [the pilots] full time and then contracting them out. Employees should not need to be worried about that risk," he says.

"We decided to go against the flow a little bit and go to full-time employment."

However, key to OSM Aviation's model was to become not just an employment agency, but what it calls a "total crew management provider", handling recruitment, crew management and planning – and more recently training, as well.

OSM Aviation's first contract was with, entirely coincidentally, Norwegian, to recruit 200 cabin crew for operations in the USA.

Since then it has seen "tremendous growth", initially with Scandinavian carriers Norwegian and Finnair, but now with a number of other airlines such as Emirates on board.

"We are developing more and more every day," says Høiby, highlighting a period of rapid growth that has seen it go from zero to more than 5,600 employees in under five years.

Managing that expansion is a "tremendous challenge", he says, but one that has also been a "fantastic ride".

The secret to success as a chief executive, he says is to amass the strongest team: "My most important job is to find people better than me in every aspect – I'll be the conductor.

"You need to be able to find people who are superb in every way. With those people on board you are able to manage that growth, but it has been hard work – it is not a regular nine-to-five job. There has been a lot of effort put in by everyone." 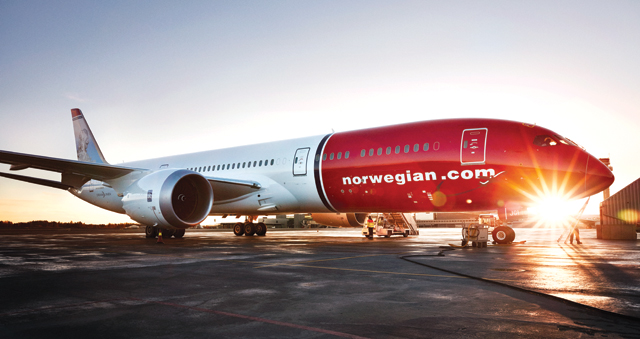 There is a temptation to link OSM Aviation's growth directly with the expansion of Norwegian, but Høiby insists that its first contract simply came out of it being "the tender that was out there at the time".

Both companies hail from Oslo and both have adopted business models that cut against the established order in their respective sectors – disruptors, as they are known – but Høiby dismisses the suggestion that there is something unique in the Norwegian character lending itself to such a stance.

"It is more coincidence than anything else," he says. "An unwillingness to change in the industry made it overdue for some disruption. It is more a question of which sector or industry that will happen to next."

Nonetheless, the fact that OSM Aviation's deal was with Norwegian undeniably helped it get off the ground, as did the presence of its maritime sister company in the USA, through the provision of requisite legal and regulatory knowledge.

"It was a good stepping stone for us – we needed to get off the ski jump in the right direction," says Høiby.

"I lived in the USA many years ago – but I don't think you could count that as experience for this."

Since then, the US operation has expanded to 800 employees, across bases in Fort Lauderdale, Florida; Los Angeles, California; JFK and Stewart airports in New York; and Providence, Rhode Island (dovetailing with Norwegian's presence in the USA).

Høiby describes as "very professional" the dealings with its 50% shareholder: "They don't decide anything as to how we run the company. We have an excellent relationship and our strategies fit very well."

And although Norwegian is itself a takeover target – with BA parent IAG having made an unsolicited approach earlier this year – Høiby believes its model and operation is sound, whoever ends up as its owner.

Although a company's success, or failure, is driven by how that business is run, certain underlying conditions can provide a catalyst for significant growth. In OSM Aviation's case, structural changes in the airline created an environment for its services to take root.

Therefore, as the likes of Norwegian have expanded and legacy carriers have been forced to adapt to changing times, OSM Aviation has found fertile ground for growth.

"The aviation industry is extremely change resistant, but almost for that reason [change] was overdue," says Høiby.

"If you look at the airline industry it has been extremely local. SAS serves Scandinavia, Lufthansa Germany, BA the UK, then the US companies doing pretty much the same thing – but none of those took this into a global model.

"But now new companies are taking a global approach and going into new markets there is a new need for crewing solutions. It is extremely expensive to have crew bases all over the world. You need infrastructure knowledge and appropriate legal knowledge – I thought that we had the right model for the future."

Of course, the cultural shift that has made companies like OSM Aviation necessary has not been universally welcomed. Pilot unions, notably in the USA, have been highly resistant to this new model: witness the protests against Norwegian Air International's application for a licence to operate to the country, which claimed it was using cut-price overseas labour as a means of driving down prices.

Inevitably, given its association with the carrier, that criticism has also been directed at OSM Aviation, albeit it is a charge that Høiby rejects, describing it as an "unfounded allegation".

"It is a misconception of what we are doing; we are creating jobs in the regions in which we operate," he says.

"You cannot take a Scandinavian crew down to Spain to fly to New York, for example," he says.

There was, he admits, a "lot of resistance" to the OSM Aviation model from employee unions, "who thought it would totally disrupt the market and take away the Scandinavian [social] model", says Høiby.

"But we didn't want to lose that – we wanted to export that. Our goal is to be the best employer, but also to provide flexibility. We are starting to be more accepted by the unions," he says, pointing to recognition from the International Transport Workers Federation.

The two parties in January 2017 signed an agreement giving OSM Aviation employees the right to organise. That was followed, in March that year, by an agreement in the USA with the International Association of Machinists and Aerospace Workers for collective bargaining purposes.

Høiby stresses that although OSM Aviation cannot guarantee continuous employment, he believes that if a contract with an airline was terminated, "we would have many more players to offer our services to".

"We try our best to deal with that, but it is no different to being employed by an airline or us," he says.

"But there is more opportunity to be relocated to another operator if you are employed by OSM."

However, that is not to say the Norwegian/OSM Aviation model is universally welcomed: while some embrace the freedom and flexibility on offer, there are plenty of concerns raised on pilot and cabin crew forums about both companies, citing weaknesses in rostering and bemoaning the shift away from concepts like seniority.

With most forecasts predicting a looming pilot shortage in the years to come – Boeing, for example, predicts that the industry will need 790,000 additional flightcrew over the 2018-2037 period– OSM Aviation is keen to ensure a future pipeline of recruits.

The training programme provided is designed to create a new pathway into the industry, creating what OSM Aviation calls "airline-ready pilots".

Cadets entering the programme are offered a job from OSM Aviation Academy at the outset of their training, but are subject to rigorous vetting before they are accepted.

"We need to focus on who we put into this market, even before they start training," says Høiby, emphasising that due diligence is key. "We see a very fragmented approach to how the market tests its student candidates before they enter into their programmes," he says.

Nonetheless, Høiby thinks the programme should have widespread appeal: "I believe this airline-ready concept can also work with regional airlines – pilots can go directly out of school into a regional [carrier] for a few years.

"I actually do believe there is going to be a great need for this way of looking at the pilot market in the future."

OSM Aviation Academy's initial intake has been inducted into the training process. This takes around 18-24 months to complete and should deliver its first tranche of pilots in about a year. The flight schools are located in Norway and Sweden at the moment, but new outfits could later be added in Spain and the USA, although Høiby notes that the bulk of future pilot demand will come from Asia.

Høiby's last time in the cockpit was as the captain of an Airbus A340 flight to San Francisco in 2014. Since then he has swapped the flightdeck for a desk. However, it is not a move that he regrets, despite the new role presenting its own set of challenges.

"I had a fantastic career in SAS and enjoyed every minute of it," he says. "But when you get an opportunity at my age, it is my last and only chance to have another career.

"They are two completely different jobs in many ways. But the best thing about being a pilot or a captain is that all the challenges you are faced with have a solution there and then. When you walk off the aircraft you have no worries – everything is solved – but as a CEO you carry your challenges with you, even to bed."