DUBAI: What next for the UAE's two low-cost airlines?

For the past eight years Flydubai and Air Arabia have appeared to enjoy formidable growth by sticking to their own trajectories. Despite the rival carriers being based just a hop from each other at Dubai International and Sharjah airports, their business models and route networks have been sufficiently distinct to ensure both prospered. However, with signs that the Gulf airline market’s unbridled expansion could be slowing, the UAE’s low-cost sector could be poised for a major shake-up. One sign of this was the decision in July to partly merge the operations of Flydubai and its big sister Emirates.

Launched in 2009, Flydubai had been run independently from its sibling, deciding its own network strategy and with no joint ticketing. Its base at Dubai International’s budget Terminal 2 – across the runway from Emirates' opulent Terminal 3 – made even informal interlining difficult for passengers. That is now changing. Although Boeing 737 operator Flydubai will retain its own management and fleet, the two airlines will now codeshare, align their schedules and operations at Dubai International, and strive for “network optimisation”.

In early October, the first 29 Flydubai codeshare routes were announced, with services beginning at the end of the month. Under the new arrangement, Emirates passengers flying with Flydubai will receive complimentary meals as well as their full checked baggage allowance. Improved transfers between the two Dubai International terminals will also take minimum connection time down to 120min. Further codeshare city pairs are expected to be added before the end of the year.

The closer relationship may seem logical and overdue – after all, the two state-owned carriers currently overlap on 33 destinations, and Emirates has, until now, had no way of offering an easy transfer to Flydubai short-haul passengers who may want to connect to a long-haul flight. However, it is at least partly a response to the success of publically listed Air Arabia, which, since its formation in 2003 has built a fleet of 48 Airbus A320s, mostly operating from Sharjah and nearby Ras Al Khaimah, but also, under joint venture arrangements, from smaller bases in Casablanca, Alexandria and Amman. 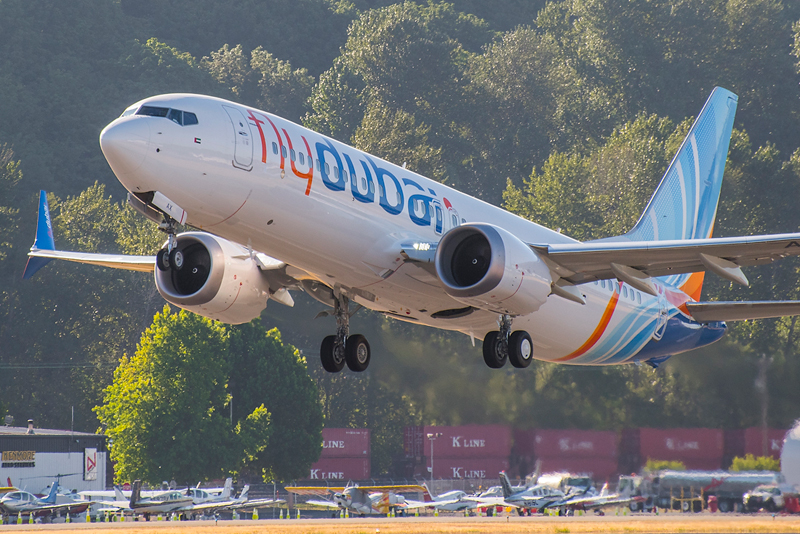 Aside from aircraft types, the two airlines pitch very different products. Air Arabia is strictly no-frills, with one-class cabins and few free extras. Flydubai, by contrast, is more of a hybrid, offering business class cabins and airport lounges, as well as seat-back entertainment. However, speaking at June’s Paris air show, Emirates chief executive Tim Clark acknowledged that the rise of Air Arabia and others had changed the market for Flydubai. “There is a lot of competition and capacity in the single-aisle area,” he said. “It would be foolish of us to ignore it.”

During three decades of rapid growth, Emirates seemed content to have an all-widebody fleet. A legacy of its early days when it lacked traffic rights to many of its neighbours, the Dubai flag-carrier focused on long-haul, and latterly used twin-aisle aircraft to fly sub-1h sectors, such as Muscat in Oman or Doha in Qatar. However, despite their degree of overlap, Flydubai serves more than 60 cities that Emirates does not, including in Russia, central Asia and Saudi Arabia. The tie-up, says Emirates, “opens up Flydubai’s robust regional network” to passengers of the larger airline, and vice versa.

Flydubai certainly has its own ambitious fleet growth plans. Its 58 Boeing 737s include a Max 8, the first of 76 of the new-generation narrowbodies it has on firm order from a commitment for up to 100 made at the 2013 Dubai air show. While many of these will replace older 737s, Flydubai has said it wants to take its inventory to 75 units by 2020 and eventually to 100. Emirates – which today operates just over 260 widebodies – says it expects the two airlines’ combined fleets to number 380 by 2022. A fully integrated operation, if not an outright merger, seems inevitable.

Fleet growth is also a priority for Air Arabia, although it has been slower to show its hand. The airline has a fleet of 48 A320ceo aircraft, 37 based in the UAE, with three more due for delivery in 2018, and six A321neos to follow in 2019. In a telephone interview with FlightGlobal ahead of the Dubai air show, chief executive Adel Ali says he expects to order further aircraft “later this year or at the beginning of next” – a mix of fleet additions and replacements. However, he says a decision on the type has not yet been made, and the airline may opt to top-up with leased aircraft in the short term.

Ali does not rule out moving away from Airbus, even though a single-type fleet is a tenet of all low-cost operators. It could do this by operating a different aircraft from one of its other hubs as a trial. Ali is a fan of the Bombardier CSeries, which he says would be useful for “thin and start up routes” as well as the 737 Max. “Our team is out there evaluating all the aircraft on the market from a technical and financial point of view,” he says.

Morocco has been the strongest performer among Air Arabia’s overseas hubs, with the fleet due to increase from five to eight this year. Egypt and Jordan – where Air Arabia has one and two aircraft, respectively – have been slower burners, Egypt because of the collapse in tourism following terrorist incidents, Jordan because of a lack of traffic rights. Ali is upbeat about both. The Egypt market is recovering and Air Arabia is looking at basing a second aircraft there, says Ali. Meanwhile, he believes Jordan has “huge potential” and he is hopeful of expanding the airport’s current seven routes.

While Flydubai has adjusted its strategy at least twice in eight years –introducing premium class and then aligning with Emirates – Ali has stuck to the no-frills philosophy he pioneered when he introduced low-cost air travel to the Middle East back in 2003. It seems to be paying off. The airline’s latest, second quarter results recorded another impressive financial performance, despite “continuous pressure” on yields.

“We have an 80% seat factor. If it isn’t broken, why fix it?” Ali asks, adding wryly, without mentioning his competitor by name: “Other carriers don’t seem to have made an impact with business class. We will be continuing with the single-cabin concept.”