Porter Airlines’ agreement with Aeroplan owner Aimia will bring the Toronto carrier substantial marketing heft and marks a shift by Aeroplan away from reliance on Air Canada and its Star Alliance affiliates, executives say.

“It is a very exciting deal for us and allows us to transform our own loyalty [programme] into a broader offering,” Porter chief commercial officer Michael Deluce tells FlightGlobal.

Perhaps most valuable, the deal gives Porter access to Aeroplan’s broader customer base, enabling Porter to market its flights to new potential customers.

Porter announced the deal, which takes effect in July 2020, on 3 August, one day after news broke that Aimia had rejected a bid by Air Canada to purchase Aeroplan.

Aeroplan has been Air Canada’s loyalty programme for decades. But that carrier is creating a new, in-house loyalty scheme that will replace Aeroplan on 30 June 2020, the day after Air Canada’s contract with Aimia expires.

Air Canada declines to comment on the Porter-Aeroplan news.

Now Porter will become Aeroplan’s “preferred” Canadian airline. In July 2020, Porter will transfer points held under its existing VIPorter programme into Aeroplan and begin allowing customers to earn Aeroplan points when flying with Porter and to redeem points on Porter tickets.

The airline will open up to 60% of its inventory for purchase via Aeroplan miles, it says.

Porter will keep VIPorter active as a means to provide frequent fliers with benefits such as priority boarding, complimentary seat selection and waiver of baggage fees, Porter says.

The agreement marks a strategic shift for both Porter and Aimia, according to Deluce and Aimia chief executive Jeremy Rabe.

Currently, VIPorter members can redeem points only on Porter’s network, which primarily radiates from Billy Bishop Toronto City airport to about two dozen cities, most of whica are in eastern Canada but several of which in the USA. 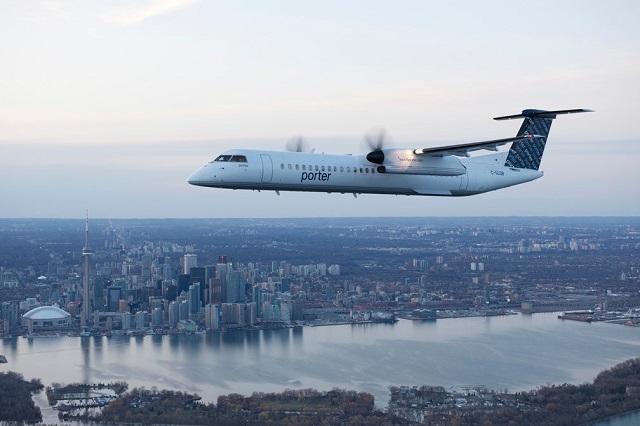 Likewise, Aeroplan members can largely only redeem points for travel on Air Canada and its Star Alliance affiliates, Deluce notes.

But Aimia intends to significantly broaden Aeroplan’s offering by 2020 to allow its more than 5 million members to redeem Aeroplan points on seats with any airline worldwide, including Air Canada, Rabe told investors on 3 August.

Aimia will do so by purchasing those seats and reselling them for points.

“We are strengthening our air offering by giving members the ability to choose any seat on any airline, anywhere at any time. Today, our programme is limited to booking with one airline in its alliance partners,” Rabe says.

At the same time, Aimia is signing “preferred” deals like the Porter agreement, which calls for Porter to sell discounted seats to Aeroplan, says Deluce.

In return, Porter’s customers gain broader redemption opportunities – strengthening the value of their points – and Porter will be able to market to Aeroplan’s broader customer base, Deluce says.

For instance, Porter could market its Toronto-New York flight to an Aeroplan member who flies the same route on competing airlines, he says.

“It’s the… precision marketing that can boost share from the incumbent airline,” Deluce says. “It creates a very powerful position for preferred partners.”

In 2017, however, Air Canada announced its intention to create its own in-house loyalty programme as a means to have better control over customer relationships.

Air Canada said its new programme will replace Aeroplan on 30 June 2020, the day after its contract with Aimia expires.

Air Canada estimated the new programme will be worth up to C$2.5 billion ($1.9 billion).

But on 25 July, Air Canada announced an offer to purchase Aeroplan from Aimia for C$250 million in cash and about C$2 billion in liabilities. The carrier made the deal in partnership with Toronto-Dominion Bank, Canadian Imperial Bank of Commerce and Visa Canada Corporation, it says.

Air Canada later upped its cash offer to C$325 million, according to Aimia, which rejected the proposals.

Aimia called Air Canada’s offers not reflective of the “value of the Aeroplan business”, and countered with a C$450 million cash offer, Aimia said on 2 August.