Australian investigators have dismissed the possibility that debris washed ashore from the Indian Ocean south of Perth is related to the lost Malaysia Airlines flight MH370.

After examining forensic images of the debris that was found on a beach 10km east of Augusta, the Australia Transport Safety Bureau declared that the material is “highly unlikely to be related MH370 and will not be used in the search for the missing aircraft.”

Malaysian Authorities have also received the imagery, but have not issued a statement as to their findings, if any.

Meanwhile, 11 aircraft and 11 ships will search for the aircraft west of Perth on 24 April, says Australia’s Joint Agency Coordination Centre. The visual search area is approximately 49,567 square kilometres, with its centre 1,584km northwest of Perth. 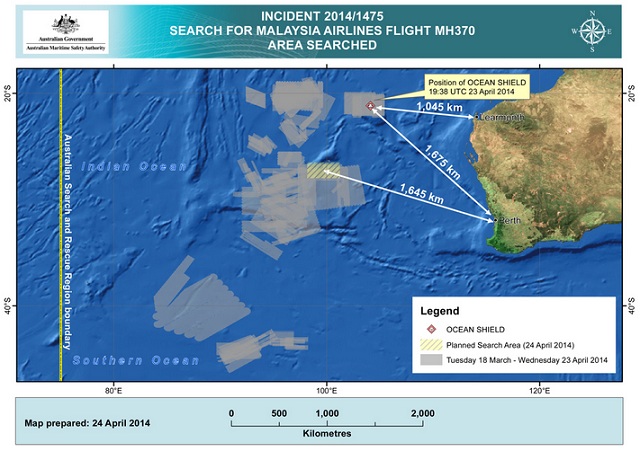 Heavy rain, low cloud, and large swells caused by a storm moving in from the north are likely to hinder search efforts.

The unmanned submarine Bluefin-21 is completing its 12th mission in the area where the ADV Ocean Shield detected “pings” on 8 April that could have come from the lost Boeing 777-200’s flight data recorder or cockpit voice recorder.

The Bluefin-21 has examinined 90% of its search area with no sign of the missing aircraft.

On 8 March MH370 mysteriously disappeared with 239 passengers and crew while operating the Kuala Lumpur-Beijing route. Analysis of satellite transmissions from the aircraft suggest it crashed into the Indian Ocean west of Australia.