B-2 fire damage made worse by firefighting shortcomings

A US Air Force report about a 2010 fire on a Northrop Grumman B-2 bomber says that firefighting crews in Guam were unfamiliar with the aircraft’s tailpipe or with the potential for tailpipe fires.

The report, dated 26 May 2010 but only recently posted on the USAF’s website, attributes the fire to the aircraft’s design and inadequate flight manuals, but calls attention to training shortcomings with the firefighting team at Andersen AFB on Guam.

It says those shortcomings likely resulted in additional damage to the roughly $1.7 billion aircraft, which required $64.4 million in repairs over nearly four years. 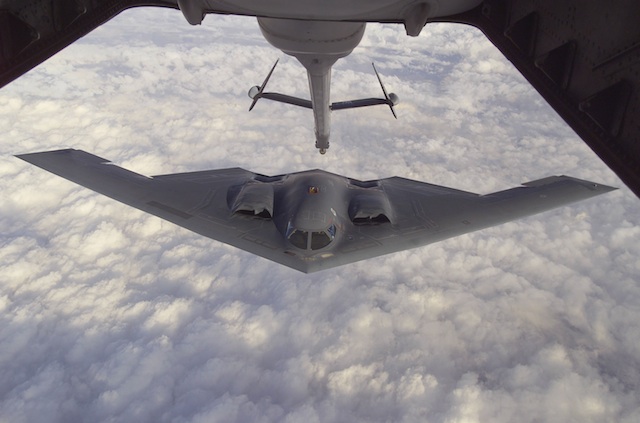 The USAF did not immediately provide answer to questions about why fire crews were ill prepared, or about any steps taken to improve training.

The fire began on 26 February 2010, after the crew started all four of the aircraft’s General Electric F118 engines, and then shut one down following a generator problem.

Firefighters contained the blaze after 26min, but applied less than 5% of 34,000 gallons of extinguishing fluid on the tailpipe. That was where the fire was hottest, at about 1,000˚F, says the report.

“There were delays in putting agent on the fire at its source in the tailpipe bay, which allowed the fire to burn longer and likely resulted in increased damage,” says the USAF. “No one in the Andersen AFB fire department was familiar with B-2 tailpipe bays.”

The USAF also recently released a report about a second B-2 ground incident, which occurred on 8 July 2011 at Whiteman AFB in Missouri. Crew error contributed to that incident, which involved overheating of the aircraft’s pitot system, says the report.

The overheating occurred because the pitot static heat switch was turned to the “on” position for 67min while the aircraft was connected to ground power during a fuel-offloading procedure, says the report.

“This action was a clear procedural error and a causal factor in the mishap,” says the report. “This switch must be in the off position prior to applying external electrical power.”

The USAF says it could not determine which crew member turned on the switch, but notes that it could have been mistaken for the adjacent windshield defog switch, which should be set to “min” while under ground power.

The overheating damaged all of the aircraft‘s 24 static port transducer units and two panels on which the units were mounted, says the USAF.