After 12 years with the European Space Agency, Roberto Aceti is confident he understands the space industry in Europe and how it works. What he wants is a fairer playing field for small and medium-size enterprises (SME) such as his own, Milan-based Carlo Gavazzi Space (CGSpace). With a turnover of €35 million ($42 million), the company wants to be a prime, managing contracts previously assigned only to the likes of Alenia Spazio and EADS Space.

There is a large enough pot to share, Aceti believes, with Italy’s space businesses turning over €779 million in 2004. Of that, €507 million came from institutional customers and €142 million from the commercial sector, with other revenues amounting to €130 million. Grabbing a substantial chunk of that business is a lofty goal for a 180-employee company, especially in a country where Finmeccanica’s web of businesses reign.

“The Italian space budget has been spent through Alenia,” he bemoans. Yet the industrial giant’s space businesses have had to change in the face of harsh realities, even with the advantages that Aceti dislikes so much. The wider international stage is bringing about changes to Italy’s space industry because of a challenging mix of unyielding markets and uncertain European policy: changes that led to joint venture deals with France’s Alcatel Space.

France’s Alcatel Space took a 66% shareholding in Alenia Spazio, Finmeccania’s satellite manufacturer, and renamed itself Alcatel Alenia Space on 1 July. The newly merged Alcatel Alenia Space had 2004 sales of €1.8 billion. Outward appearances have not changed at Alenia’s Rome office, where only one small sign says Alcatel. The staff there report only experiencing a different working culture when dealing with their now more-senior French colleagues. 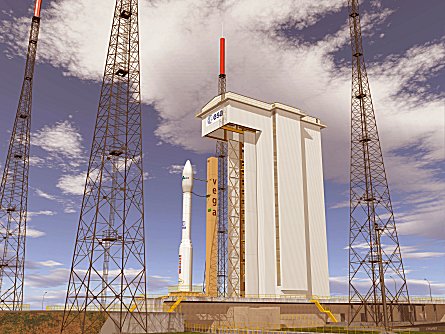 In return for Alenia, Finmeccanica’s Telespazio Holding took ownership of Alcatel’s space services arm – and got the better half of the deal, according to its chief executive, Luigi Pasquali. “The space industry is suffering on the manufacturing side; the number of satellites is reducing fast. On the service side the market is not so difficult,” he says. His company owns the L’Aquila-based Fucina space centre, a collection of over 90 antennae in a valley an hour’s drive from Rome. What growth there was in the space industry in 2004 came from services, and this is where Telespazio aims to expand its ground operations.

Of the 4,600 Italian space workers, almost half work for major companies like Alcatel and Telespazio, with the remainder split almost evenly between ground segment providers and small manufacturers like CGSpace. Unsurprisingly, the Italian industry is largely focused on satellite manufacturers and service providers, like Alcatel and Telespazio, with only 500 people directly employed in launcher manufacture. So when commercial satellite slumped from 35 world orders in 2000 to just 13 in 2004, even Italy’s biggest companies had to find partnerships. Italy’s workforce shrunk in 2004 by 300 – more than one in every 20 workers.

Aceti hopes the fact the Italy’s largest space company is now a Franco/Italian joint venture will end accusations that his company is not Italian enough to receive Italian space agency (ASI) funding. “In the past the voices from Rome have been that Carlo Gavazzi is German,” he says, recalling bitter fights for funds. CGSpace is owned by Germany’s OHB Technology.

Fair or not, the playing field of government policy is so uncertain that Europe’s main institutional customer, ESA, has two budgets for its member states’ ministers to consider this December. The uncertainty stems from unknown future International Space Station (ISS) costs due to NASA’s Space Shuttle problems; ESA member states’ own prevarications over how to replace the existing Ariane launcher in 2020; and future co-operation with the European Union and what monies it can bring to the table.

After two ESA/EU space councils, ASI president Sergio Vetrella is no more confident about co-operation, and is highly critical of what is being touted for the European Space Programme. “[The space policy] is so general it is postponing the real problem [of where we spend the money],” he says. A flagship project of the new programme is Galileo, the European satellite navigation system.

For Alcatel Alenia Space Italy, as the French-led company’s new Rome-based business is called, EU/ESA co-operation is becoming a mixed blessing. “We will assemble all 30 Galileo satellites here in Rome,” says Alcatel Alenia senior vice-president for navigation Sergio Greco, “but we’re only covered [financially] up to the end of November”. A €400 million cost overrun on satellite development has to be paid for and, although the European Commission is prepared to pay its €200 million share, ESA member states have been squabbling about who pays the rest.

Such uncertainty on joint programmes, and on what is spent where, will continue to create a challenging and changing market for Italy’s firms. What Aceti, Pasquali, Vetrella and other industry leaders know is that ESA’s budget is likely to remain around €2.9 billion a year for the foreseeable future. Last year, national programmes totalled €1.74 billion, for an all-Europe civilian spending of over €4 billion, but for most member states budgets will not grow.

Italian companies may fare better: “There is a willingness in Italy to increase money for research. Italy has already increased its budget,” Vetrella says. The EU/ESA nations spent about €700-800 million of space research and development last year, and half of this was French. European space industry trade body Eurospace says Europe’s space research spend is less than 1% of the nations’ combined gross national product, compared to USA’s 2.5%, Japan’s 1.8% and China’s 1.2%.

Italian companies can take some comfort from their government being second only to France in its domestic space spending, recently overtaking Germany. The Italian space programme, which is coming to the end of its 2002-5 budget period, is focused on access to space, human spaceflight, navigation, observation, telecommunications and biotechnology.

The Constellation of Small Satellites for Mediterranean Basin Observation (Cosmo Skymed) is a major project. This four-satellite constellation in a Sun-synchronous, 90°-inclination orbit will monitor a swathe of the eastern end of the Mediterranean and the Middle East. The prime contractor is Alcatel Alenia Space. The 1,700kg satellites will have a five-year lifespan and carry an X-band synthetic-aperture radar that can be used for both civilian and military purposes. These imaging radars will aid disaster relief, environmental monitoring and detect potential enemy movement. Telespazio has a substantial piece of the project and will operate the ground segment from Fucina.

Although not strictly an ASI project, Italy has taken leadership on Europe’s newest launcher programme, the Vega small launcher designed to carry 1.5t to low Earth orbit (LEO). Rome is providing 65% of the money for the rocket, which is expected to be launched from ESA’s former Ariane 1 launch pad in French Guiana in September 2007. The project began in 2003 with the signing in Rome of two contracts. One was for €221 million with prime contractor European Launch Vehicle, formed by ASI and Italian aerospace and propulsion company Avio. The second, also with Avio, was for €40.7 million and involved French space agency CNES in the development of the launcher’s P80 first-stage solid rocket motor.

Vega has been designed as a single-body launcher with three solid-propulsion stages and an additional liquid-propulsion upper module for attitude and orbit control and satellite release. At 30m (100ft)-high vehicle, with a lift-off mass of 136t, will carry 1.5t to a 700km (435 miles), 90°-inclination orbit. Vega is aimed at the 300-2,000kg (660-4,400lb) scientific satellite market.

Another beneficiary of this Italian leadership is the €212 million-turnover Rome-based information systems business Vitrociset, which is rebuilding the Ariane 1 pad for Vega after winning the ground segment contract. Based near Telespazio’s Rome office, Vitrociset’s management want to expand the 20% of revenues that comes from space business. “Space has changed in the last 10 years. You must be a very efficient manufacturer in Europe, there is not enough room for lots of manufacturers,” say Antonio Del Buffalo, Vitrociset’s space business area manager.

One of the subcontractors to Vitrociset is CGSpace, which is providing 50% of the launch pad infrastructure. As well as Vega, Aceti’s company has benefited from Italy’s national Unmanned Space Vehicle (USV) programme, which is managed by the country’s CIRA aerospace agency. CGSpace has built the first of the programme’s two test vehicles, Flight Test Bed (FTB)-1. “We have wanted to develop system capabilities to challenge the status quo,” says Aceti. The FTB-1 was delivered last month and will be dropped by stratospheric balloon early next year. It was planned to have been dropped last month, and part of the delay is due to CIRA taking over organisation of the supply of the balloon, which was supposed to be an ASI responsibility.

CGSpace is now talking to CIRA and Alcatel Alenia Space Italy about the USV-X, a suborbital re-entry vehicle similar to USV that will be launched atop the Vega in 2010. Being owned by a German company did not stop CGSpace from becoming the prime on this high-profile Italian project, but CIRA’s senior management thinks of its project partners less and less as national entities. “We are moving towards more European entities. I’m optimistic, I believe Europe is still being built,” says CIRA’s head of space. Dr Gennaro Russo.

As part of the Alcatel/Finmeccanica deal, Russo says, the Franco-Italian company can only expect to be a preferred national partner until 2008. As a result, the company’s management may soon decry the traditional national-champion, geographic-return policies used for ESA programmes and want more competition.

Aceti’s solution to encourage this is a rearrangement of programmes between the EU and ESA. “Some infrastructure should come from the EU budget; some tasks such as telecommunications satellites should be taken over by the EU,” he says. In Aceti’s vision, ESA would just do space science, and would not do launcher development.

With the EU’s history of free markets and competition, the theory was that there would be greater competition. However, the Galileo navigation satellite programme has not delivered on the promise of competition and now its partners are embroiled in workshare negotiations.

Vitrociset was part of the iNavsat consortium bidding for the Galileo concession, not Finmecanicca’s EUrely group, and Del Buffalo has been disappointed by the turn of events and expects more delay. “I have some doubts the concern will be agreed soon,” he says. The EU-ESA body formed to manage Galileo, the Galileo Joint Undertaking, has said a deal is needed by the end of the year to keep the project on track for a 2008 start.

The other EU/ESA satellite programme at an early stage is the Global Monitoring for Environment and Security (GMES) system. Theoretically this is another opportunity for competitive tendering, but at a Eurospace conference in Paris last month industry leaders poured cold water on any ideas that a competitive policy will emerge from the EU-backed space programme. “What is needed is flexibility, a kind of map that reflects specialisation and capability and geographic return is done through this map. Geographic return, we can’t completely escape,” said EADS Space chief executive Francois Auque.

This may explain why Alcatel was ready to swap its satellite services arm for Finmeccanica’s satellite manufacturing business Alenia Spazio. This was geographic specialisation in action, and something CGSpace’s owners OHB Technology may want to think about.