Boeing remains bullish about the prospects for more sales of its F/A-18 E/F Super Hornet overseas, as the end of production in 2017 starts to loom.

Chris Raymond, vice-president, business development and strategy for Boeing Defense, Space & Security, says the type is still being pitched to several countries, with potential interest in Malaysia, Europe, the Middle East and possibly also the USA.

“We have to evaluate all these competitions against the timing of the assembly line,” says Raymond. “You don’t want to stop, but you’ve got to be thoughtful about what delivery schedules will be and what the status of the line will be at that time, because you’ve got to factor this into your pricing.”

Raymond was speaking to Flightglobal at the Aero India show in Bengaluru in mid-February. 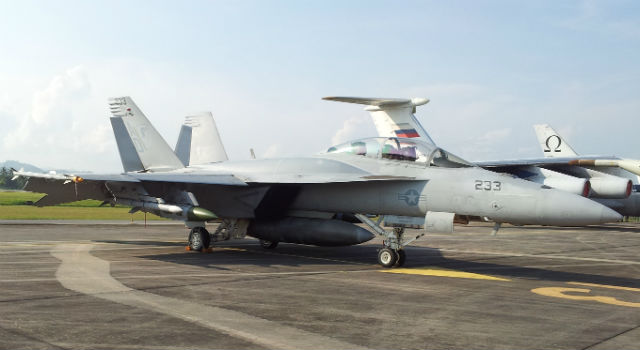 One key campaign is Kuala Lumpur’s multirole combat aircraft (MRCA) requirement for 18 fighters, which will be in the spotlight at the biennial Langkawi International Maritime & Aerospace (LIMA) exhibition during the third week of March. The MRCA is envisaged as a replacement for Malaysia’s 10 obsolete RAC MiG-29s. But politics and funding issues have put a brake on the long-running requirement.

Boeing has sent Super Hornets to the last few iterations of the LIMA show, including displaying a potential conformal fuel tank enhancement (above). Other candidates for MRCA include the Dassault Rafale, Eurofighter Typhoon and Saab Gripen NG.

“We take any competition for more fighters seriously,” says Raymond. “There is no arguing that [MRCA] has been talked about for a long time, but we have to keep pursuing it. Hopefully the politics and budget will be right for it to move forward at some time.”

Raymond also sees an opportunity for the Super Hornet in Canada, where a recent government report suggested that other fighters are just as capable of meeting the country’s needs as the Lockheed Martin F-35A. It is also eyeing a potential need in Denmark, which has a programme to replace its Lockheed F-16s.

“There are also a couple of countries in the Middle East expressing interest, but we’re not able to disclose those,” says Raymond. “There is some exploration going on around both the Super Hornet and also the [Boeing] F-15.”

Bahrain and Kuwait have previously been regarded as potential Super Hornet buyers.

Raymond estimates that there could also be opportunities to sell more F/A-18 E/Fs or the type’s electronic warfare variant, the EA-18G Growler, to the US Navy.

“There are some noises being made about inventory shortfalls they may have, or electronic attack requirements. We’ll see how the congressional process plays out this year.” He notes that the navy’s existing Super Hornet fleet has also seen extensive use, potentially creating a requirement for additional airframes.