Boeing and Saab finally took the wraps off a purposely-designed jet trainer today to offer as a replacement initially for the US Air Force’s fleet of more than 400 Northrop T-38s.

Showing off a design featuring twin, canted tails and a shoulder-mounted, anhedral wing, the Boeing/Saab team will compete with a high-powered trainer with a 17,700lb-thrust GE Aviation F404-GE-402 with full afterburner.

The team’s clean sheet design resembles Saab’s compact Gripen fighter and its twin tails allow for more maneuverability at high angle of attack, Darryl Davis, president of Boeing Phantom Works Defense told reporters. In its most recent draft request for proposals, the US Air Force called for 25˚ of high angle of attack. 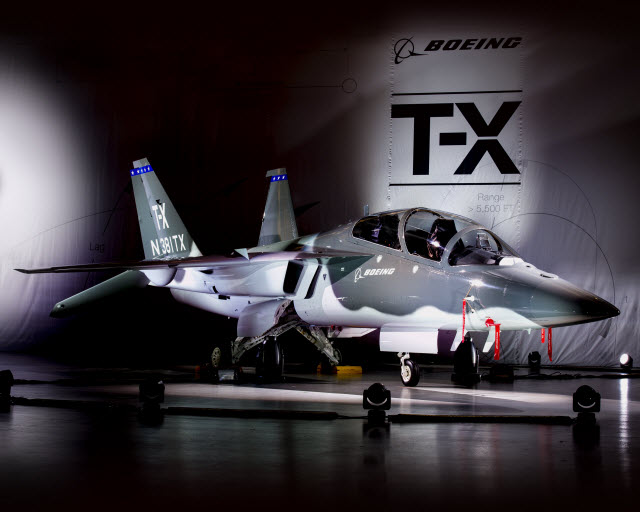 “Typically, you grow tails extremely large for high angle of attack maneuverability and we chose to take a different path,” he says. “Size relates to cost. The smaller and more compact, the more requirements you’re going to meet and the more affordable is.”

While Boeing focused on meeting the USAF’s requirements to keep costs down, their T-X offering allows for future growth potential, Davis says. That growth plan included the afterburner, which was not a USAF requirement, he says.

Northrop Grumman’s T-X offering, the Model 400, is powered by a single GE Aviation F404-GE-102D engine, FlightGlobal previously reported. However, that version of the F404 will not include an afterburner, limiting the aircraft to 11,000lb-thrust. Among the T-X bidders, Lockheed Martin/Korea Aerospace Industries’ T-50 features the same engine as the Boeing/Saab design, including the afterburner. Raytheon/Alenia, meanwhile, is offering the M346 powered by two Honeywell F124 engines generating 6,200lb-thrust each.

Those capabilities could leave the door open for a possible aggressor role, though Davis cautioned Boeing is focused on winning the T-X competition first.

“This is all about the trainer,” he says. “If we choose to go down that path, we built something with a lot of growth potential.” 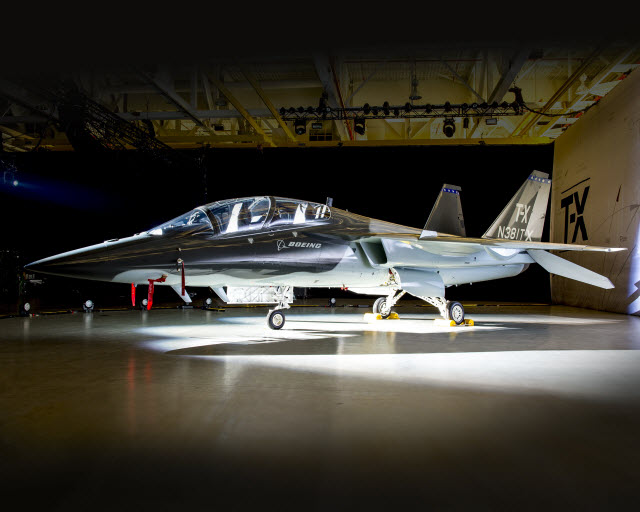 Boeing must deliver five jets for the engineering, manufacturing and development stage, two of which are already built. The two jets built today are not prototypes, but are ready to go into the EMD phase, Davis says. Boeing would conduct EMD at its facilities in St. Louis but is assessing several options for its production phase, he adds.

The Air Force plans to procure more than 300 T-X trainers to replace its aging fleet of T-38s and prepare its pilots for single-seat, fifth-generation fighters. Boeing and Saab have teamed up with a clean-sheet design for their trainer bid, while Raytheon is offering the T-100 variant of the twin-engined Alenia Aermacchi M-346 Master. Lockheed Martin stepped away from its clean sheet design and is pushing its “ready-to-go” T-50A. Lockheed and Korea Aerospace Industries recently completed an initial test flight of the second T-50A trainer aircraft, the company announced on 26 July.