The Boeing C-17 heavy cargo aircraft has become the sticking point in an otherwise speedy KC-46A aerial refuelling demonstration phase, with officials confirming that “higher-than-expected boom axial loads” have delayed trials with that aircraft and the A-10 attack airplane.

C-17 testing began shortly after the successful passage of fuel to a Lockheed Martin F-16C in January, but with the turbulent “bow wave effect” generated by two large aircraft flying in line, the refuelling system indicated that the loads were too high to begin passing fuel.

USAF programme officials explained in a February interview that the fix could involve software changes, likely parameter adjustments to the boom control laws.

As of 1 April, Boeing had not fully solved the issue, and neither the company nor the air force could say if it will impact an upcoming low-rate production decision, which was expected this month but is now scheduled in May. A positive “milestone C” appraisal by the Pentagon’s top acquisition executive Frank Kendall will unlock funding to buy the first 19 operational KC-46s over two lots for seven and 12 aircraft.

Any further setbacks will add to the schedule and cost overruns already incurred because of the faulty wiring of the initial batch of 767-2C-configured aircraft, late design changes to the refuelling system, late parts, and the accidental contamination of one fuel system.

“During boom testing with the C-17, the Boeing and US Air Force flight test team recorded higher-than-expected boom axial loads,” an air force spokesman explained in an email on 1 April. “Boeing is working on a fix, and we don’t yet know the schedule impact to the planned May milestone C decision, but the problem is well understood and we don’t expect an extended delay.”

“We are working to resolve the issue and will have a better understanding of any programme impact shortly,” adds Boeing in a separate statement on 1 April. “It’s important to remember that this is a developmental program where issues are discovered and fixed.” 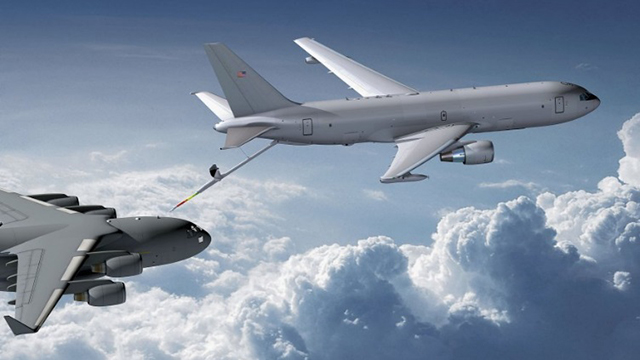 Concept image of the Boeing KC-46 refuelling a C-17

To date, the KC-46 has demonstrated boom refuelling of the F-16, as well as the Boeing F/A-18 and AV-8B via the wing-mounted and centreline hose and drogue systems. It has received fuel from a Boeing KC-10.

“The remaining fuel demos required for milestone C are the C-17 and A-10. Those will be scheduled after the Boeing fix is in place,” the air force says.

As of January 2016, operational testing was due to start in April 2017 and the first 18 aircraft must be delivered to US Air Mobility Command by August that year. That's according to a US Government Accountability (GAO) office report published on 31 March, which adds that full-rate production of 15 aircraft per year will start in March 2018. 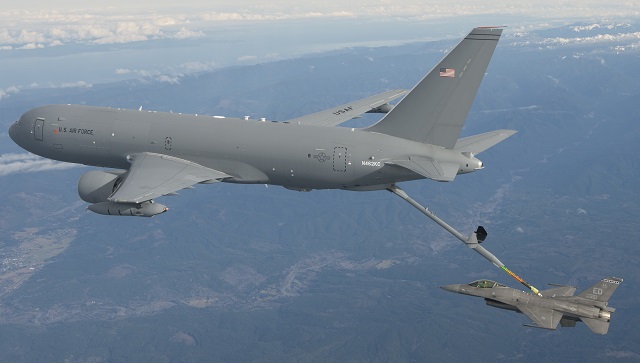