​Bombardier enters this year's NBAA on a roll, having recently received Canadian certification for its Global 5500 and 6500 while ramping up deliveries of its flagship 7500.

Bombardier enters this year's NBAA on a roll, having recently received Canadian certification for its Global 5500 and 6500 while ramping up deliveries of its flagship 7500.

At the same time, the Montreal airframer is signalling its commitment to the superlight business jet market through the development of an updated, lower-priced version of the Learjet 75 – a variant called the 75 Liberty. 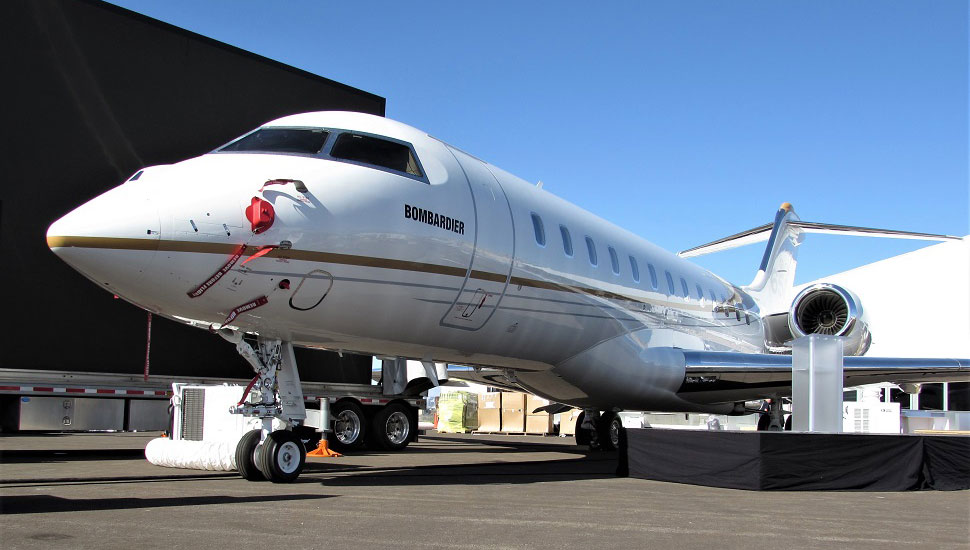 Canada certificated the Global 5500/6500 in September

Bombardier's big news came in late September with the announcement that Transport Canada had certificated the 5500 and 6500 (above), clearing the path for Bombardier to begin deliveries. The European Union Aviation Safety Agency approved the jets in October.

A lessor will own the first aircraft – a 6500 – but lease it back to Bombardier for use as a product demonstrator, in much the same way as the company did with the first-delivered 7500.

Bombardier anticipates the US Federal Aviation Administration will certify the 5500/6500 next.

However, an executive says achieving certification in various countries has become a less-seamless process following the Boeing 737 Max crashes and the subsequent grounding of the type.

Those events led to criticism of the FAA's certification oversight and regulators have started to question how easily the agency has rubber-stamped other countries' approvals.

"I don’t think [the certification process] been overly burdensome, but yes, it has been more scrupulous," says Bombardier vice-president of programme management Julien Boudreault. "The different authorities have strengthened their own approval processes. They don't rely as much on the bilateral agreements."

Bombardier expects to deliver a few examples of the 6500 this year and to hand over the first 5500 in 2020, a schedule reflecting customer orders. "Both are ready to go," the airframer says.

The company caught the industry by surprise in 2018 when it secretly flew a 6500 to the EBACE show in Geneva, where it unveiled the jet and publicly announced the programme.

The 16-passenger 5500 and 17-passenger 6500 are updated variants of the 5000 and 6000. Bombardier tweaked the new jet's wings, particularly the leading edge, and swapped out the previous model's Rolls-Royce BR710 turbofans for more-efficient R-R Pearl 15s. The new engine burns 7% less fuel per pound of thrust than the BR710 and generates 9% more thrust at take-off, Bombardier has said.

Those changes enabled Bombardier to "improve significantly the hot and high performance of the jet", which is important at airports like Toluca near Mexico City, says Boudreault.

From that city the 6500 can reach mainland Europe, Bombardier says.

Bombardier has outfitted the jets with its Nuage line of seats (a chaise lounge is an option), an updated cabin management system (CMS), 4K-resolution entertainment screens and Ka-band internet. The airframer maintains that the Global's slender wing makes the aircraft fly smoother than competing products.

"The design is sleek, it's simple, it's modern," Boudreault says.

Pilots can choose between synthetic or enhanced vision, though Bombardier is working with Collins to roll out a combined vision system that will mesh the images into a single display.

"We still have a couple of things in the bag that are going to be coming up," says Boudreault. "We believe today that we have the most advanced cockpit."

Bombardier has set list prices for the 5500 at $46 million and for the 6500 at $56 million – actually 9-10% less than the 5000 and 6000's list prices. The lower rates better reflect current market conditions, Bombardier says, stressing that list prices differ from sales prices.

The 5500 and 6500 may be Bombardier's youngest offspring, but the company has no shortage of interest in its Global 7500, a 19-passenger, GE Aviation Passport 20-powered continent crosser with 7,700nm range and a Mach 0.925 top speed.

Earlier this month Bombardier announced that a 7500 connected the "longest nonstop city pair in business aviation history" – a 8,225nm jaunt between Sydney, Australia and Detroit, Michigan. 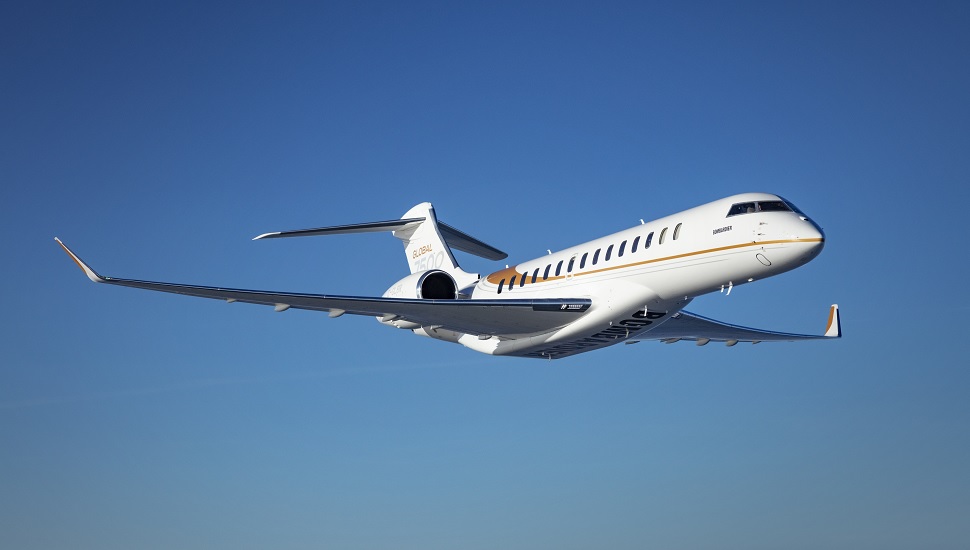 The 7500 entered service late last year, but Bombardier has generated a buzz around the jet ahead of NBAA by releasing information about the 7500's sound system, which it calls "l'Opera".

All 7500 aircraft have the system, but Bombardier had not previously disclosed details.

The 1,275W l'Opera sound system uses a combination of subwoofers and mid- and high-range speakers installed throughout the cabin, with cabin zones having different speaker combinations.

In perhaps its most novel feature, passengers can set the audio system to focus sound in specific areas of the cabin – a feature Bombardier calls a "personalised audio sweet spot".

"We want to create a rich audio field exactly at the level of the user," says Bombardier’s manager of industrial design Tim Fagan.

Bombardier is also keen to highlight the 7500's "Soleil lighting system" – an algorithm-driven technology that controls the aircraft’s interior lighting in ways intended to combat jetlag.

The 7500 is itself a new aircraft, with the first example entering service as a company demonstrator in December 2018.

Bombardier handed over one 7500 in the first quarter of this year, two in the second quarter and is now ramping up deliveries as it works to reach a goal of 15 to 20 7500 deliveries in 2019. Eventually it hopes to hand over 40 7500s per year.

"The barn is full of 7500s. They are in different stages of production," says vice-president of the 7500/8000 programme Stephane Loubert.

Questions remain about the status of the Global 8000. Bombardier launched that aircraft in 2010 as sister ship to the 7000, which it renamed the 7500.

But Bombardier has not publicly moved forward with the 8000's development, leaving the industry wondering if that aircraft will become a reality, and executives still give few clues.

"We'll keep the 8000 in consideration and think about it as the 7500 continues to ramp up," Bombardier says.

The large-cabin jets tend to generate most headlines, but Bombardier is also using NBAA to stress its ongoing commitment to smaller models – the Challenger 350 and in-development Learjet 75 Liberty.

Bombardier will have cabin mock-up of the Liberty at NBAA.

A basic version of the 75, the Honeywell TFE731-powered Liberty has six seats in standard configuration, two fewer than the traditional 75. Some of the LearJet 75's equipment, such as its auxiliary power unit, are optional on the Liberty. 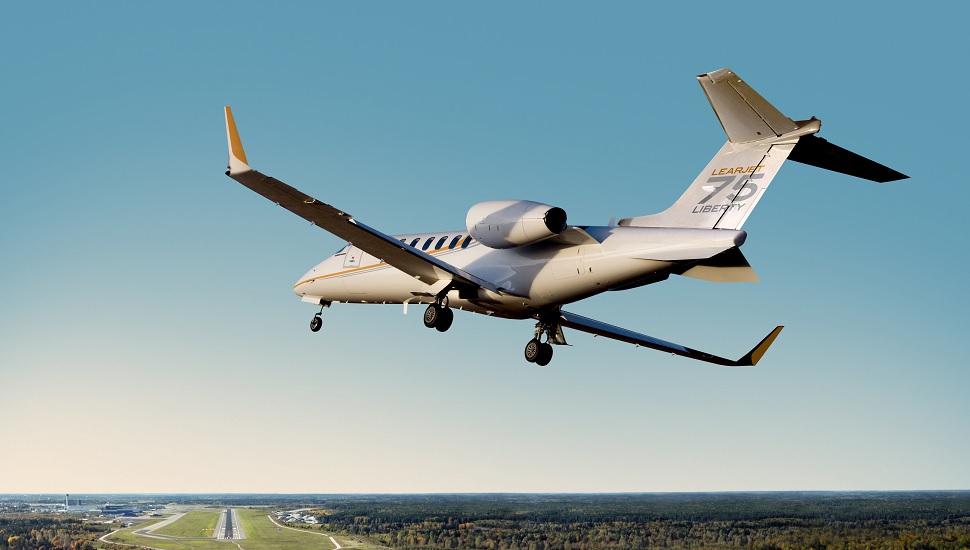 The changes make the Liberty more competitive with other light jets that also lack such optional equipment, he says. Liberty's contenders include Embraer's Phenom 300E and Cessna's Citation CJ3+.

"It was very simple for us. We wanted to make the Learjet available to every customer out there," Loeffler says. "We are not letting go of Learjet, and Learjet will thrive."

He also stresses that the Liberty, because of its weight, is certificated in the USA as Part 25 transport aircraft – a higher bar than the Part 23 regulations under which competing jets are certified.

Bombardier also continues updating the Honeywell HTF7350-powered, 10-passenger Challenger 350. It recently equipped the jet with better sound dampening technology and rolled out an enhanced vision system, which will be available on aircraft delivered next year, it says.

Bombardier also introduced a package of braking improvements and rudder control modifications that give the 350 1,500nm more range when operating from some short runways, it says.