Airbus Corporate Helicopters (ACH) is partnering with high-end car manufacturer Aston Martin on a bespoke edition of the ACH130. The agreement is for an initial three years, but could be extended and expanded to other models if the relationship works, the pair say.

The ACH130 Aston Martin Edition was formally unveiled today in the ski resort of Courchevel, France. The Alpine location was chosen for the launch because of the high concentration of very wealthy individuals holidaying at the destination. 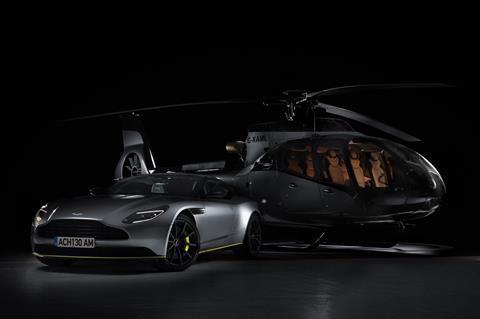 ”Many of these people will be Aston Martin and ACH customers, some of whom will have flown into the resort by helicopter,” said Frederic Lemos, head of ACH, during an 18 December preview of the rotorcraft in London.

The turbine-single is available with a choice of four interiors and exteriors all designed by Aston Martin. The aircraft are built at Airbus Helicopters’ manufacturing base in Marignane, France and then shipped green to ACH’s headquarters in Oxford, UK for completion.

The initial example is scheduled for delivery at the end of the first quarter.

He notes that many of its customers are already helicopter owners and are looking for “something very special” to complement or replace their current vehicles.

Despite a price tag in excess of €2.8 million ($3.1 million), Delmaire expects the Aston Martin version “to be well received” by its customers, many of whom, he says “are already huge aviation fans”. 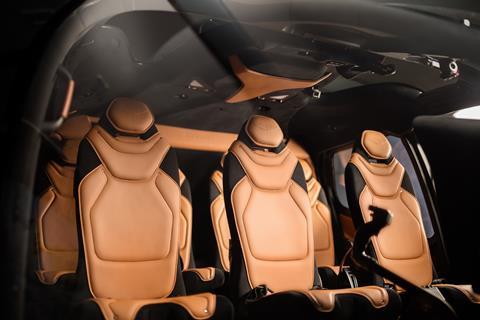 “All the limited-edition cars that Aston Martin has introduced with an aviation theme throughout its history have sold very quickly. There is certainly an emotional link to this market.”

Lemos predicts sales of around five units a year – around one-quarter of total annual ACH130 shipments, or 10% of total output for the H130 programme.

ACH approached Aston Martin in July 2017 to discuss collaborating on a new design for the ACH130. “We wanted to bring something evocative and unique to the market, and given Aston Martin’s impressive heritage in producing high-end, sophisticated cars, they seemed like a perfect fit for us,” says Lemos.

If successful, the agreement could be expanded, with the light-single ACH125 a possible candidate. “This is all driven by a strong, successful relationship, as well as market demand for a new offering,” says Lemos. “It’s too early to make any decisions.”