The past year has been one in which Gulfstream fired back against competitors, launching an aircraft that is set to help the company regain its slot in the top echelon of the traditional business jet market. That, of course, is the G700, a large-cabin jet that Gulfstream launched at the NBAA show in October and expects to begin delivering in 2022.

For several years the industry had speculated over when Gulfstream would take its next step – and whether that would be to develop a new jet that would compete with Bombardier’s Global 7500, which entered service in 2018 and reset standards at the top of the market. Powered by GE Aviation Passport turbofans, the 7500 can carry 19 passengers and has range of up to 7,700nm (14,300km). 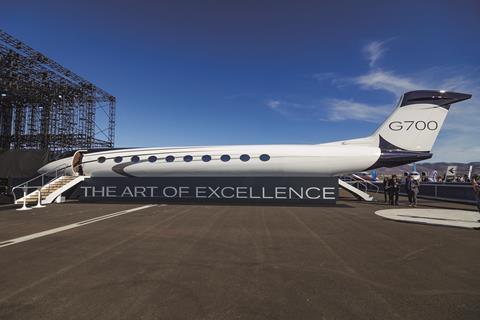 Prior to the G700, Gulfstream’s flagship had been the G650ER, an extremely capable aircraft, but one that was based on technology that was several years old and that sat slightly beneath the 7500’s benchmark. The G650ER can likewise carry 19 passengers and has a range very nearly matching the 7500, at 7,500nm. But the G650ER’s cabin is shorter, measuring 14.3m (47ft) long, with three living spaces. The 7500 cabin is 16.6m long and has four living spaces.

Earlier this decade, after developing the G650 and G650ER, Gulfstream turned its attention to developing and certificating two slightly smaller twins – the Pratt & Whitney Canada PW800-powered G500 and G600.

Observers were left questioning if Gulfstream would respond to the 7500.

The company answered those questions on 21 October, when, during a ritzy event near Las Vegas at the NBAA show, it unveiled the G700. During the event, Gulfstream revealed a cabin mock-up of the jet – and the cabin is where Gulfstream says much of the G700’s beauty and advantages lie.

The airframer says the cabin will be the largest in the industry, measuring 17.4m long – nearly 1m longer than the 7500. It will also be the same width as the G650ER’s cabin – 2.49m – and slightly wider than the 7500, at 2.44m, according to the manufacturer’s specifications. Customers will be able to outfit the G700 with five cabin areas, or four plus a crew rest area.

During the NBAA event, Gulfstream president Mark Burns called the G700 “truly a masterpiece of business aviation” and announced orders for 10 aircraft from Qatar Airways and an unspecified number from Flexjet.

Regardless, Gulfstream executives insist 7,500nm is plenty, enabling customers to travel between virtually any cities they might choose. Executives also stress that customers do not want greater range – they want more cabin space.

Gulfstream now has a couple of years to bring the G700 through development and certification, assuming it sticks to its 2022 delivery goal.