Bombardier’s operating business lost $251 million in the first quarter of 2021, but the company’s chief executive insists the aerospace industry has turned a corner and that an upswing is under way.

Excluding interest, taxes, depreciation and amortisation, however, Bombardier earned a $123 million profit, up 43% year on year.

“We are in a very different and better place than we were a year ago,” Bombardier chief executive Eric Martel said on 6 May. “Most market trends and indications are pointing to a gradual economic reopening and… recovery.”

“The worst of this pandemic may be behind us,” he adds. 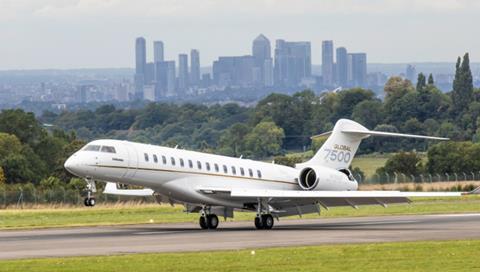 The $251 million loss excludes a $5.3 billion gain from selling its train business to French firm Alstom in January. If that is factored in then Bombardier turned a $5.1 billion profit in the first quarter.

Following a series of divestments Bombardier’s business jet division is now the backbone of the company: it generated $1.3 billion in first-quarter revenue, up 18% year on year.

The company delivered 26 business aircraft during the three months, including eight of its flagship Global 7500s, matching overall output for the first quarter of 2020.

Despite signs of recovery, Bombardier has not signalled an intention to boost Global 7500 output. The company will remain “disciplined” with production rates until further industry stabilisation is seen, Martel says.

In 2021, Bombardier anticipates delivering 110 to 120 business jets, generating more than $5.6 billion in revenue and achieving an adjusted profit before interest and taxes of more than $100 million.

“Revenues from business aircraft activities in 2021 are expected to be better than 2020 based on a gradual economic recovery scenario,” Bombardier says.

The company also anticipates growth of its aircraft services business, noting it is expanding that operation in places including Miami, London, Singapore and Melbourne, Australia,.

“We remain confident in our ability to deliver on both our full-year financial guidance and longer-term objectives,” Martel says.

Bombardier’s targets include expanding its aftermarket business to account for 27% of revenue by 2025, reducing Global 7500 unit costs 20% by the 100th delivery, and removing $400 million in costs from its business annually by 2023.

“Despite the short-term global shock caused by the Covid-19 pandemic, the business aviation industry is expected to grow in the long term, driven by continued wealth creation and introduction of new aircraft models and technologies,” the company says.

Since the sale of the train business closed, Bombardier has paid off about $2.4 billion in debt, reducing its annual interest expenses by $200 million.

Bombardier ended the first quarter with cash and cash equivalents worth $3.1 billion, up from $1.8 billion at the end of 2020.