UK investigators believe two Cessna 208 turboprops were just 5s from an almost certain mid-air collision on final approach, after each aircraft joined a landing circuit without visual contact with the other.

The collision was averted only by “the narrowest margin”, according to the UK Airprox Board, after the air-ground communication service operator realised the two aircraft were simultaneously descending towards the runway with one stacked above the other.

Neither pilot was aware of the other’s presence and the communication service operator ordered the higher aircraft to execute a go-around.

One of the 208s had been carrying out a parachute drop from Sibson airfield outside Peterborough, and was returning for an approach to runway 06 on 18 April. The other aircraft, operated by the same company, was undertaking pilot training and performing a circuit.

The parachute aircraft had joined final approach but the training aircraft also turned into the approach from below. 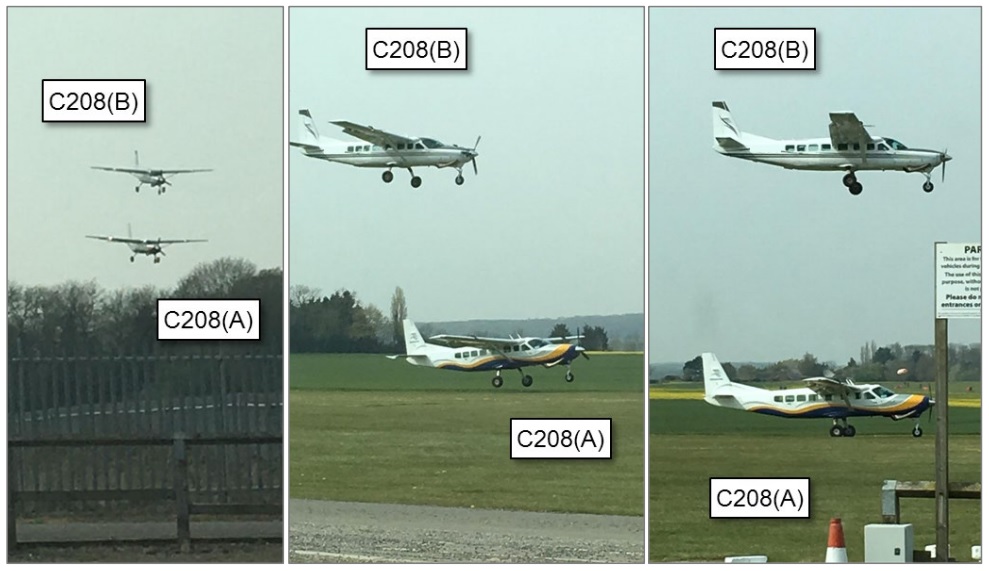 Visual conditions prevailed and see-and-avoid procedures were in place, given that the airspace was uncontrolled. But the high-wing design of the Cessna 208 and the position of the aircraft, one above the other, would have limited the pilots’ visibility.

The Airprox Board queried whether the pilot of the higher aircraft had fully understood the limitations of the communications service, in that it was not empowered to give traffic information.

But it states that air-ground radio transmissions alone “had not achieved” their purpose of providing sufficient situational awareness to aircraft joining the visual circuit – partly because a crucial call from the lower aircraft, that it was on final approach, had not been heard by the upper aircraft.

“As a result [the upper] pilot’s mental model was that there were no other aircraft on final and so they were effectively [the first in line to land],” it adds. When the lower aircraft called again that it was on final approach, the upper pilot interpreted the call to mean this aircraft was behind them.

“All of which highlighted the perils of conducting highly-dynamic joins to busy airfields,” says the Airprox Board.

It considered whether the pressured nature of parachute drops – the need to return quickly to the airfield to pick up more parachutists with minimal delay – generated an “unhealthy sense of urgency”.

The board says the operating authority should ensure sufficient flexibility within the parachute dropping schedule, and an “appropriately just culture” within the safety management system, so that pilots can feel comfortable abandoning a “steep join” to circuits if unsure, rather than pressing on in the interests of “programmatic expediency”.

Both parachute-drop pilots involved in the incident agreed that skydiving operations are safer if the airport stops other traffic at the circuit for the time between dropping and landing.