UK investigators have detailed the terrifying moment the pilot of a Cessna Citation CJ1+ fought to control the aircraft after a Tamarack active winglet malfunctioned in flight and caused the jet to roll left at a bank angle of 75°.

In the wake of the 13 April 2019 incident regulators in Europe and the USA temporarily banned flights of aircraft with the Tamarack Atlas system installed until modifications could be carried out. That, in turn, pushed the Idaho-based firm to seek Chapter 11 bankruptcy protection, from which it was cleared to emerge earlier this year. 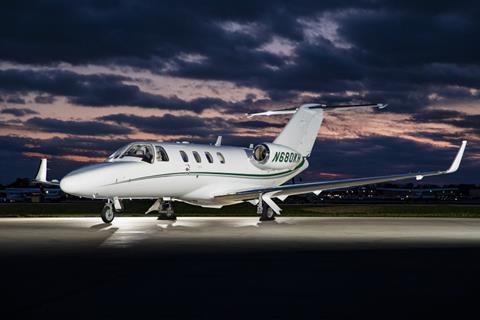 Aircraft had Atlas winglets installed in 2017

Around 1min after its departure from Bournemouth airport’s runway 08 at 14:17, as the Cessna twinjet (N680KH) climbed through 3,000ft, it “rolled left with a rate the pilot described as ‘very quick’,” according the UK Air Accidents Investigation Branch (AAIB).

Despite applying full right aileron and full right rudder, “these actions were insufficient to control the aircraft” and it continued descending, even though the pilot had “both hands on the control column”, says the AAIB.

Around 19s after the onset, the roll angle peaked at 75° left wing down, with the nose pitched down at 9°; the descent rate peaked shortly after at 4,500ft/min, with the jet reaching a minimum altitude of 2,300ft.

Although managing to exert a degree of control over the aircraft, the pilot “recalled it took all his strength to lift the aircraft’s nose, reduce its airspeed, and recover the bank angle to around 30° left wing down”, says the report.

As he set up for his return to Bournemouth the pilot was required to use “continuous full right aileron and some right rudder until landing”. Air traffic controllers observing the approach “believed the aircraft would crash short of the airfield”, but in the event it landed safely at 14:23.

During the upset the pilot had pressed the illuminated ‘Atlas’ button on the console and reset the system’s main circuit breaker, but neither action had any effect, says the AAIB.

The Atlas system on the CJ1+ consists of a 56cm (22in) extension to the original wingtip, which includes a winglet and an active control surface. This is designed to automatically activate in high positive or negative g situations to unload the wing and keep it within its original loading envelope.

Although it was unable to examine the left-hand Atlas installation in-situ, the AAIB, aided by analysis carried out by the manufacturer, concluded that the control surface on the left wing had erroneously deployed – probably due to a short circuit in a control unit – with its trailing edge in the ’up’ position.

While the system had detected this anomaly and automatically cut power, the aerodynamic forces acting on the control surface forced it to a fully-extended ‘up’ position where it stayed for the remainder of the flight.

Owing to reporting errors, four previous instances in which the control surface had erroneously deployed were not collated by the European Union Aviation Safety Agency.

“If all the events involving the Atlas system that had occurred before the serious incident involving N680KH had been reported to EASA, the agency may have determined that the reliability was not achieving continued airworthiness requirements,” notes the AAIB.

The incident aircraft had only been acquired in March 2019, with the Atlas winglets installed in 2017. However, a pre-purchase report for N680KH had failed to highlight a recommended service bulletin from Tamarack to change the retention screws – the likely cause of the short circuit – in the system’s control unit.

In addition, a second optional service bulletin, issued shortly before the upset, would have introduced a means to automatically centre the control surfaces if they were depowered. But the AAIB notes that there “had been little opportunity to embody the [service bulletin] before the event”.

It recommends that Tamarack provides more detailed guidance to pilots on the potential effects of an Atlas failure and how to counter a system malfunction in flight. In addition, regulators in Europe and the USA should identify what extra training pilots require when supplementary systems like Atlas are installed on an aircraft.

In the wake of the incident, EASA and the US Federal Aviation Administration mandated changes to the Atlas system to prevent a recurrence of the problem. Tamarack has also incorporated safety improvements into newer versions of Atlas.