Cirrus is showcasing its Vision Jet for the first time in the Middle East, as it seeks to drum up sales of the single-engined personal jet from the region's owner flyers, training schools and charter operators.

The US airframer, headquartered in Duluth, Minnesota, has made inroads into the region with its SR22 piston-single. The Royal Saudi Air Force operates 25 of the high-performance types for primary flight training, and a single example was delivered at the end of November to Emirates Flight Training Academy.

"There are also eight owner-flown SR22s across the region, with Saudi Arabia the largest market for this sector," says Stefano Cestarelli, Cirrus regional sales director for Italy and the Middle East. 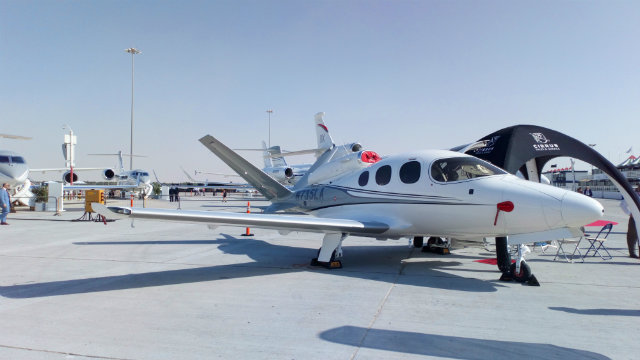 He adds that a handful of these owners have placed orders for the $2.7m Vision Jet, and the company is holding talks with other potential buyers. "The population of owner-flyers in the Middle East is fairly small, but growing," says Cestarelli. "This group is made up of very high net-worth individuals who often own large, professionally flown business jets, but like the freedom of piloting their own aircraft."

He says the "ramp appeal" and novelty of the Vision Jet is also proving a draw to the region's buyers. "The aircraft is the only Part 23-certificated personal jet on the market, and the only jet to be fitted with an emergency parachute system," he says.

Pilot training companies in the region are also expressing an interest in the Vision Jet, Cestarelli notes. Cirrus is also targeting local charter companies, although he admits this is a much tougher sell in a region that is dominated by high-end, multi-engined business jets.

"It is a challenge; but a single-engined business jet has a lot more appeal than a turboprop, and is much cheaper to operate than a twinjet," he says.

The Vision Jet entered service in late 2016 and Cirrus has delivered 85 examples to date from an order backlog of over 600 aircraft.