Europe's regulator has warned over the hazard of passenger doors on parked business jets exploding open following a string of serious incidents, including one in which the aircraft's captain was killed.

In a safety information bulletin (SIB) issued on 12 February, the European Aviation Safety Agency (EASA) identifies "an excessive differential pressure between the inside and the outside of the aircraft", as the root cause of the problem.

The agency says such events have resulted in injuries and even fatalities to people inside and outside the aircraft.

These include an incident at Kittila airport in Finland on 4 January 2018, when the captain of an Austrian-registered Gulfstream G150 (OE-GKA) died from injuries sustained when the passenger door blew open as he was attempting to release it.

The midsize jet was being prepared for its flight, with an attendant on board, the auxiliary power unit (APU) running and the cabin heat on. However, the doors and the air pressure outflow valve were closed. 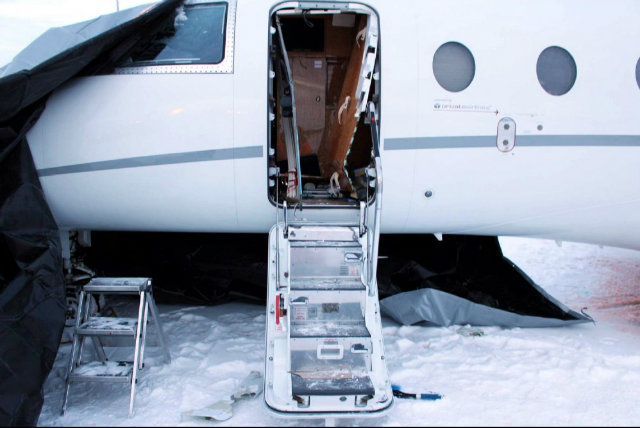 Finnish investigators concluded that the cabin was "over-pressurised", and once the door-locking mechanism was released, it "blew open with excessive force, hitting the captain".

EASA says while closing the aircraft doors helps to reach and maintain the "desired" cabin temperature during the heating or cooling process, it can also result in an "undesired build-up" of a pressure differential between the cabin and the outside environment, particularly if the outflow valve is closed. This can happen during normal operation of the aircraft, maintenance, or training.

The safety agency recommends that aircraft owners and operators, maintenance personnel, ground handlers, airport operators, firefighting and other emergency workers are made aware of the risks described in the SIB.

Personnel must verify, if possible, that all relevant outflow valves are in the open position. A pressure build-up relief mechanism should also be operated before opening a fuselage door on a pressurised aircraft, EASA says.

Where flightcrew or maintenance personnel are unable to control the outflow valve or other "external valve" positions without the APU or engine, one cabin fuselage door must remain open, the safety agency mandates.