Farnborough airport, the UK’s busiest and only dedicated business aviation hub, has smashed its annual movement record for the third consecutive year, and expects the upward trend to continue ”for the foreseeable future”, driven by sustained demand for business aircraft travel and the facility’s “strong appeal” as a leading gateway to London and the southeast. 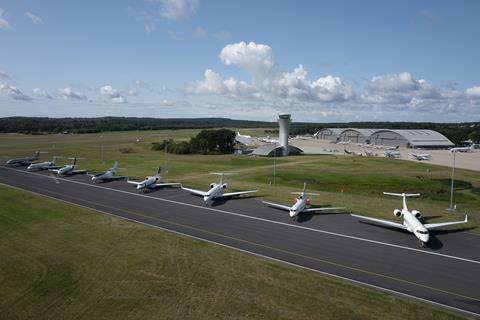 Farnborough is the UK’s only dedicated business aviation airport

Brandon O’Reilly, chief executive of Farnborough airport, describes the facility’s performance as “incredible”, and attributes the increase in movements to a variety of factors.

These include: the “Brexit effect”, with many people flying to the UK to exploit new investment opportunities; Farnborough’s unique appeal as the UK’s only dedicated airport for private aircraft; and the six-month closure last year of RAF Northolt for runway resurfacing.

Ministry of Defence-owned RAF Northolt is the fourth-largest airport in the London area for business aviation traffic, recording around 9,000 movements in 2018. Although it re-opened in November following the runway work, this has not cut movements at Farnborough, says O’Reilly. ”We have retained much of the [base’s] commercial traffic that trasferred to us during its closure,” he says.

“Movements climbed in November and December, and January’s traffic is already 3.5% higher than the previous year at 1,450 take-offs and landings,” says O’Reilly.

“The outlook is very positive, and if Farnborough continues to grow at the current annual rate, we should hit our 50,000 annual movement ceiling within this decade.”

Farnborough airport was sold by TAG Aviation last year to Australian developer Macquarie Infrastructure and Real Assets. “While we have a new brand identity, it’s business as usual under our new owner, who is committed to continue growing our five-star offering,” says O’Reilly.

Sustainability is a key component of the airport’s strategy, with a pledge to retain its carbon-neutral status, achieved in 2018, and reduce the site’s environmental impact on the local environment.

Farnborough and UK air navigation service NATS recently created proscribed flightpaths around the airport, which is located 34 miles (55km) southwest of London, which will be introduced on 27 February. This follows approval from the UK Civil Aviation Authority in July 2018 to reclassify the airspace from uncontrolled class G to class D.

O’Reilly says these “dedicated departure and arrival routes are not only safer and more efficient, but they will lower aircraft emissions and significantly reduce noise around the airport by avoiding some commonly overflown regions”.