It might not sound like ideal timing, taking delivery of a business jet on 26 March just as the world was locking down amid the coronavirus pandemic. However, Finnish operator Jetflite says its latest Bombardier Challenger 650 barely paused for breath during its first weeks in service, flying 100h in 14 days, mostly on medevac and repatriation missions.

“We were really surprised at how busy we were in April with people desperate to get back home, although things have quietened down a bit now,” says Elina Karjalainen, managing director of the Helsinki-based firm, which operates three other Challengers as well as a Dassault Falcon 7X and Gulfstream G150. 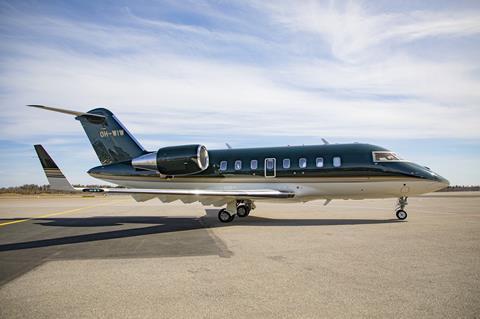 Three of Jetflite’s Challengers – the new 650 as well as two 604s – are equipped as ambulances and the company specialises in medical repatriation flights and charters for agencies and corporations to “challenging” parts of the world, including Afghanistan, Antarctica and parts of Africa.

Karjalainen admits that operating during the coronavirus period has been problematic. “We have had to get special diplomatic permits at times, and finding places where our crews can rest has been difficult. Even finding fuel has been hard,” she says.

She expects demand for “urgent flights” will remain steady throughout the summer and, in common with much of the industry, hopes normal business traffic begins to resume later in the year.

Jetflite is a subsidiary of Finnish industrial group Wihuri.