US business-jet maker Gulfstream has roared back to NBAA after a three-year hiatus during the coronavirus pandemic.

The company is making a splash this year, arriving at the show with all but one of its in-production and in-development business jets – the exception being its G400, which remains in early stages of development.

“We are excited to be back… We will have our full fleet on display,” says Gulfstream chief marketing officer Jeannine Haas. 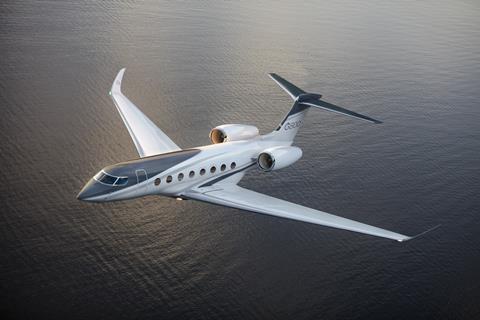 “Each aircraft sets a new standard for the industry, in terms of safety, high speed, performance, environmental efficiency and an unmatched cabin experience,” Haas says.

Gulfstream did not forget about its in-development, 4,200nm-range G400, which it launched alongside the G800 last year and which it aims to begin delivering in 2025. The company comes to NBAA with a G400 mock up.

“We’ve already started some manufacturing of the G400, and it’s progressing very well,” Haas says. “The aircraft has good, solid demand – off to a great start.”

Gulfstream has reported incredibly strong demand recently, with parent General Dynamics reporting a mid-year aerospace backlog of $5.8 billion, up from $2.7 billion one year earlier. To meet that demand, Gulfstream is expanding its G400/G500/G600 manufacturing footprint in Savannah.

It aims to keep the momentum going by sending its two production-test G700s from NBAA on a “world tour”, with the jets visiting some 20 cities in Mexico, Europe, Turkey, Southeast Asia, Africa, the Middle East and India, says Gulfstream senior vice-president of worldwide sales Scott Neal.

“It’s an opportunity for us to show the airplane to markets around the world, generate some excitement… And to hopefully take some orders in the process,” he says.