German general aviation show Aero in Friedrichshafen has become the latest victim of continuing Covid-19 disruption – although, rather than cancelling outright, organisers have moved the event from April to 14-17 July.

The move means the show will take place less than two weeks before the US event it most closely mirrors, the Experimental Aircraft Association’s AirVenture in Oshkosh, Wisconsin, which starts on 26 July. 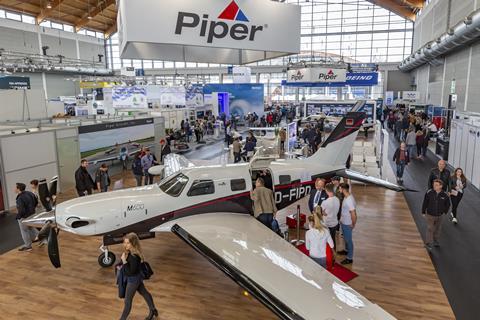 The latest wave of coronavirus infections and travel restrictions has forced the postponement or cancellation of a number of events in recent months, the latest being rotorcraft industry gathering Heli-Expo, which had been due to take place in New Orleans in March.

The annual Aero has already failed to take place once, with last year’s edition axed early in the pandemic. The show in the southern lakeside town, home to the Zeppelin factory, attracts a large audience of professional and enthusiast aviators, as well as exhibitors from central Europe’s substantial light aircraft manufacturing sector and around the world.

After the cancellation in 2020 of virtually every aerospace event – except February’s Singapore air show – the hope had been that the show calendar could get underway again in 2021. However, the decision not to hold the Paris air show in June has left May’s European Business Aviation Convention and Exhibition as almost the only survivor. So far, the event, in Geneva, is still slated to take place on 18-20 May.