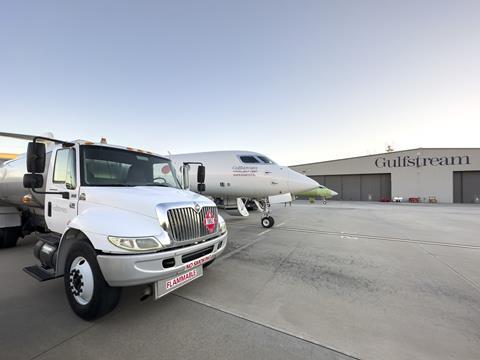 “Leading our industry closer to decarbonisation is a long-standing priority, and testing, evaluating and promoting new developments in SAF takes us another step closer to that goal,” adds Gulfstream president Mark Burns.

The aircraft was fuelled with two types of SAF. Those included fuel from World Energy in California derived from “hydro-processed esters and fatty acids… from waste fat and plant oils”. The other was synthesised aromatic kerosene made from plant-based sugars and supplied by Wisconsin fuel company Virent, Gulfstream says.

”Demonstrating that current Rolls-Royce engines for business jet and large civil applications can operate with 100% SAF as a full drop-in option, this test lays the groundwork for moving this type of fuel towards certification,” says engine maker R-R.

Current certifications only allow for R-R engines to be powered with fuel composed of no more than 50% SAF, R-R adds.

The entire aviation industry faces pressure to cut carbon emissions, though that pressure has been particularly acute for manufacturers of fuel-thirsty business jets.

The business jet industry has set a goal for the sector to have “carbon-neutral growth” after 2020 and to achieve net-zero emissions by 2050 – a tall goal considering the nascent state of sustainable aviation fuel production.