Honda Aircraft has unveiled a new variant of its HondaJet, the Elite S, which has upgraded avionics and, when carrying high payloads, 120nm (222km) additional range.

Revealing the new variant on 26 May, the airframer said it will be “available” next month. 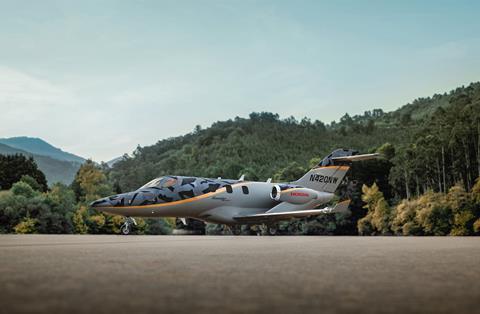 Maximum take-off weight increases by 91kg on the Elite S

“We… are always seeking to push the limits and develop our design. This philosophy of continuing improvement led to the HondaJet Elite, and now the Elite S,” he adds.

But the Elite S’s maximum take-off weight is 91kg (200lb) higher than the previous variant. That gives it 120nm additional range when carrying one pilot and five passengers, says Fujino.

Alternatively, the Elite S can “take an additional passenger” during a “typical mission”, says the company.

Honda specifies that the range benefit “begins to phase in above [294kg] 650lb of payload” and means the jet can “carry additional payload for the same distance, or load more fuel and fly further with the same payload.”

The Elite S builds on improvements introduced with the Elite. Honda gave the Elite auxiliary fuel tanks that upped its range over the baseline HondaJet by 214nm, to 1,437nm. The company produces HondaJets in Greensboro, North Carolina. They are powered by twin over-wing mounted GE Honda HF-120 turbofans. 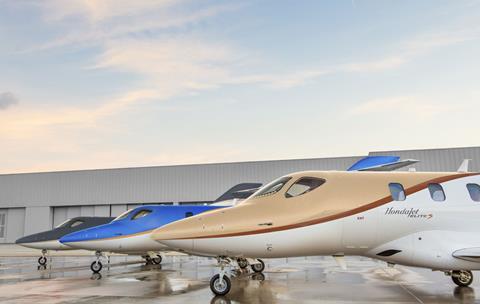 Three new external colours have been introduced on the variant

Honda is adding new features to the the Elite S’s Garmin G3000 avionics, including DataComm and ACARS capabilities.

DataComm is a technology supported by the Federal Aviation Administration (FAA) which allows pilots to communicate with air traffic controllers (ATC) via text messages. Earlier this year, the FAA said 62 ATC towers had DataComm capability.

The Elite S also has COM3 capability, meaning operators can disable a data link feature and use that link as a third VHF radio, “to increase dispatch reliability”, Honda says.

Additionally, the Elite S has an “advanced steering augmentation system”. The company does not provide details about that feature other than to say it “reduces pilot workload and enhances safety for missions in specific weather conditions”.