UK firm Samad Aerospace has developed a modular air taxi concept in which a passenger pod can easily transfer between a wheeled base for travelling on roads, to a wing-borne system for flight.

Samad chief executive Seyed Mohseni provided a briefing on the proposal to journalists at the Langkawi International Maritime and Aerospace exhibition.

The basis of HUMA (Home & Urban Mobility Aircraft) is a core pod for two passengers. This can be mated with a either flight module or a road module.

HUMA’s road module, basically an electric car base, carries the pod to a base where the system’s flight modules are based – a “vertiport” as Mohseni describes it. The pod is then transferred to the flight module. This flies the pod to another vertiport, where the core pod is transferred to another electric car base, which takes it to its destination.

The HUMA flight module uses a pair of contra-rotating rotors to take-off and land. As the vehicle ascends, the flight module pivots forward, transitioning to a fixed-wing aircraft layout and allowing for greater range and speed.

Given that the flight module's wings and canards always have control, a helicopter pilot will not be necessary. Potentially a pilot with a basic private license qualification would be able to fly the aircraft. 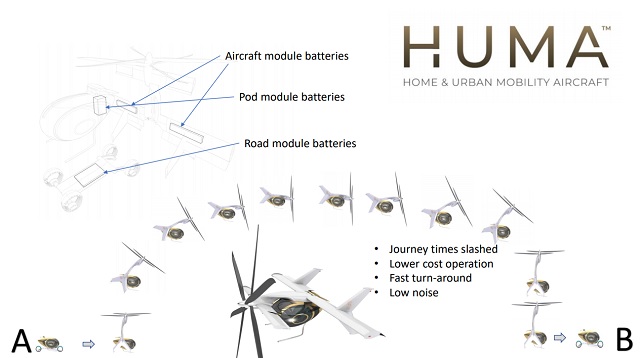 The challenges include optimising the batteries and working out a market entry strategy. Initially HUMA would require a pilot, but this could be phased out as people become more comfortable with the system and autonomous vehicles in general.

Samad is also looking for funding of £15 million ($19.6 million). This will allow it to develop a full prototype of the HUMA concept, but also a half-scale prototype of the company’s six-seat e-Starling hybrid-electric vertical take-off and landing aircraft.

Should the funding come through, the half-scale version of the e-Starling could fly by the end 2019, and the HUMA prototype could be ready for the Farnborough air show in 2020.

Mohseni says that the Malaysian government and local industry is very interested in the HUMA concept, seeing it as one possible way to get involved in a promising new part of the aerospace sector. Mohseni even discussed the concept with Malaysian prime minister Mahathir Mohamad at the show.

“One reason we are here is partly to do the funding,” he says. “We've realised is that private sector investors in Asia are more progressive than Europeans and venture capital funds in the USA.”