After its blink-and-you’ll-miss-it one-day appearance at NBAA last year – two years into its flight campaign – Pilatus has again brought the PC-24 to the convention, this time with expected certification and entry into service with launch operator PlaneSense just weeks away. The Swiss manufacturer is in the final stages of a flight-test campaign involving three aircraft and in July completed the mating of the wings and fuselage of the first series-built example of the twinjet as it gears up to produce the 84 PC-24s on order over the next two and a bit years.

Despite the challenges being faced by some business aircraft manufacturers, Pilatus – which surprised the industry by launching the PC-24 into a crowded light jet market in 2013 – has had a remarkable start with the programme. It even – highly unusually – stopped taking orders for what it dubs its “super versatile jet” in 2014 after, it claims, making the 84 sales in just 36h. However, it will reopen the orderbook in 2018 after “the first positive reports from PC-24 operators”. Pilatus predicts performance data – which will be released after certification – will “exceed [earlier] expectations”. 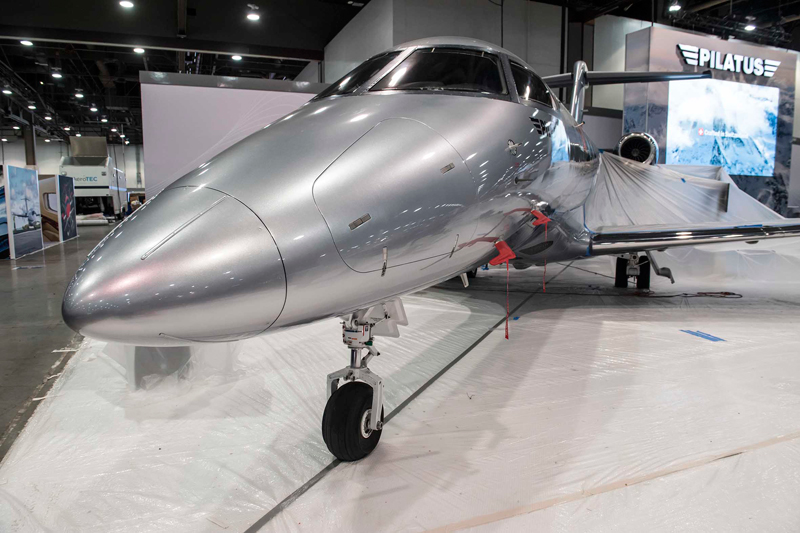 The seven-seat PC-24 is Pilatus’s first jet after almost eight decades of producing models such as the rugged PC-6 Porter short take-off and landing (STOL) trainer – production of which will end in 2019 after 60 years and around 600 sales – and the PC-12 NG, the best-selling single turboprop business aircraft, with more than 1,500 deliveries to date, including 91 last year. The company also produces the PC-21 turboprop military trainer, whose customers include the French air force. However, the PC-24 could top them all, with Pilatus forecasting production of 4,000 units over the next 40 years.

Ahead of the show, Pilatus has been saying little about progress with the flight testing or detailed plans for production, aside from its update in July – such reticence is characteristic of a company based in Stans, deep in the mountainous centre of Switzerland, which developed the prototype of the PC-24 behind closed doors before its unveiling at the European Business Aviation Convention and Exhibition four years ago. The third flight-test example – the first built to production standard – took to the air in March.

Pilatus – which turned over around $843 million last year and employs just over 2,000 staff – has been investing in its production facilities ahead of PC-24 certification, spending Swfr60 million ($62 million) on a new assembly hall and surface treatment centre in Stans, and a further Swfr60 million on milling machines that it says will allow it to “keep production in Switzerland in spite of high labour costs”. In the USA – a market Pilatus expects will make up half of all PC-24 deliveries – the company has built a new completion and support facility in Broomfield, Colorado.

The $8.9 million, Williams International FJ44-4A-powered jet will have a maximum range of 1,950nm (3,610km) with four people on board, and 1,800nm with a contingent of six. This is broadly comparable to the similarly priced Embraer Phenom 300, probably its closest rival. Unlike the Brazilian aircraft, however, its wings are not swept and lack winglets. The PC-24’s engines are also placed further back. Inside, the Swiss type is roomier, with a 7m-long and 1.69m-wide cabin, compared with 5.2m and 1.55m for the Phenom.

Although it will also face competition in its segment from the Cessna Citation M2 and even the smaller HondaJet, business aviation analyst Rolland Vincent believes the PC-24 will be a big success. "Pilatus seem to have found a secret sauce that incorporates smart design, precision engineering and a philosophy of do one thing at a time and do it exceptionally well," he says. "As a relatively modest-sized OEM and private company they are adept at channelling their available resources to take advantage of market opportunities they seem uniquely positioned to capture."

Vincent believes a twinjet will appeal to a broad prospect base, from fractional, charter operators and flight departments to owner-fliers who will appreciate its single-pilot capabilities. The PC-24’s STOL characteristics will "bring smiles to the many customers who will step up from a PC-12", he says. But one of the type’s biggest boons, he believes, will be its 1.3m cargo door. "It means owners can bring it all with them – colleagues, family, friends, the Harley-Davidson and a family of St Bernards. What's not to like? It’s a smart design."

Pilatus’s product strategy has been wise, says Vincent. "They saw an opportunity to provide a step-up path for customers delighted with the PC-12 and broaden the brand's appeal to a larger prospect base by embracing those with different requirements, such as longer or more demanding missions, a preference for a jet or a larger budget," he says. "It is now more than 20 years since the PC-12 was certificated, and the aircraft has been continually improved in a prudent fashion. These improvements will continue, no doubt, unencumbered by the PC-24, which occupies a different market space."

The Launch customer, US franctional ownership provider PlaneSense. is a long-standing Pilatus customer and the largest commercial operator of the PC-12 NG with a fleet of 35. These will be joined some time this quarter by six PC-24s. George Antoniadis, president and chief executive of the 21-year-old New Hamshire-headquartered firm, is sorry the number is not higher. "We could only have six PC-24s from the first order round," he says. "We are working closely with Pilatus to secure more aircraft and are looking at a double-digit fleet."

The company, which has had a "very positive" response to its PC-24 fractional ownership programme since launching in January, will take its second and third jets next year, with three to follow in 2019. It is offering a range of fractional options, starting at $685,000 for a one-sixteenth stake. This entitles the owner to 50 flying hours a year, with a monthly management fee of $8,900 and an occupied hourly rate of $2,320.

In July 2015, PlaneSense introduced the Nextant 400XTi light jet as its interim product; its fourth example arrives in November. "Our plan is to keep the XTis until we have built a critical mass of PC-24s," says Antoniadis. Other admirers of the twinjet at the show this year may have to have similar contingency plans. With Pilatus not even taking orders until after NBAA for a delivery slot well into the next decade, would-be owners or operators of the Swiss type will either have to wait or look to other aircraft on the market to meet their fleet requirements.