FlightGlobal is the official media partner of the Global Urban Air Summit, being held at the Farnborough International Exhibition & Conference Centre on 3-4 September, and the organisers are offering £100 off the registration fee to FlightGlobal readers.

You can read our recently published scene-setter article on urban air mobility below:

Barcelona or Beijing, Los Angeles or Kuala Lumpur, a bird's eye view of every modern metropolis will have one thing in common: long ribbons of concrete and tarmac lined with cars whose occupants are anxious to get from A to B as quickly as possible.

If the locals are fortunate, there will be an efficient metro or tram system, but, in almost every instance, travelling within the city will be tedious, tiring and time consuming. For those in a rush, urban congestion is a great equaliser. The same laws of time and motion apply to both chief executives in their chauffeur-driven limos and cleaners in crowded subway carriages. 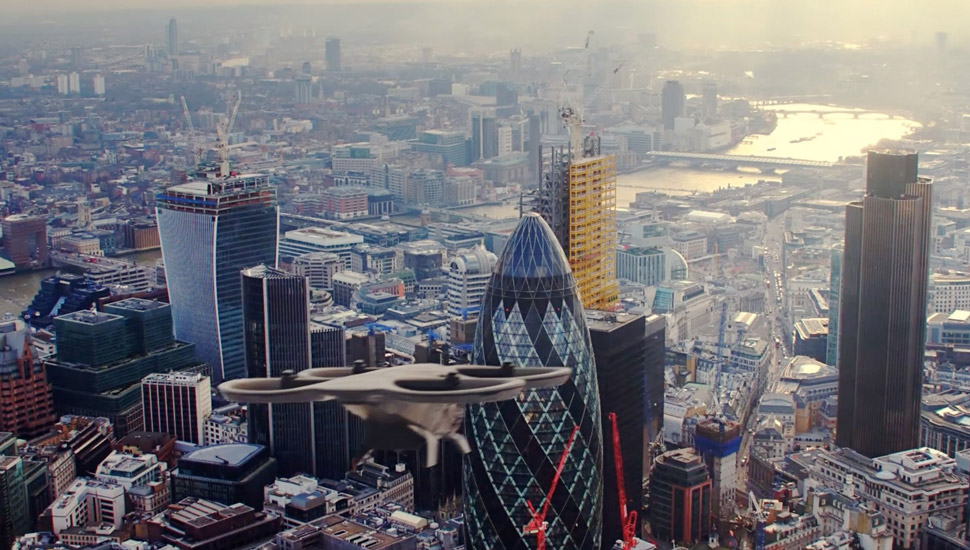 Occasionally, there is a way to rise above the chaos. In Sao Paulo in Brazil – one of the most traffic-snarled conurbations on the planet – helicopters whisk wealthy executives from downtown office blocks to apartment complexes and weekend homes in the country.

However, such personal freedom is beyond the means of 99.99% of citizens, and besides, in most urban environments strict safety regulations ban or severely limit the use of private rotorcraft. In London, for instance, helicopters are restricted to select air lanes and must land at the capital's only heliport, in Battersea. The rules in New York are much the same.

The Jetsons – a 1960s cartoon series – presented a comic vision of an everyday family who travelled around their futuristic city in a transparent-domed flying car. More than 50 years on, that world of democratised mobility in three dimensions has not arrived.

However, if the dozen or more enterprises developing electrical vertical take-off and landing (eVTOL) and other air mobility platforms have their way, we could be heading for the biggest revolution in urban travel since the car replaced the horse and carriage. The fact that this new breed of aircraft will have significantly lower noise and carbon footprints than conventional helicopters adds to their appeal.

Those behind the eVTOL concepts range from seed-funded start-ups to the world's most powerful airframers. Airbus, Boeing and Embraer each have divisions, subsidiaries, or teams looking at urban air mobility solutions. Propulsion and technology giants including GE Aviation, Honeywell and Rolls-Royce are also heavily involved in projects. Taking the subject very seriously, too, are regulators and lawmakers. An environment for affordable, eVTOL machines will require not just major changes to the certification regime but a complete rethink of air traffic management above our cities.

A conference at Farnborough on 3-4 September will provide a forum for many of these innovators, as well as the regulatory authorities. Organised by Farnborough International, the Global Urban Air Summit programme includes speakers from developers such as Bartini, SkyDrive, Vertical Aerospace and Volocopter, as well as Airbus and Boeing. 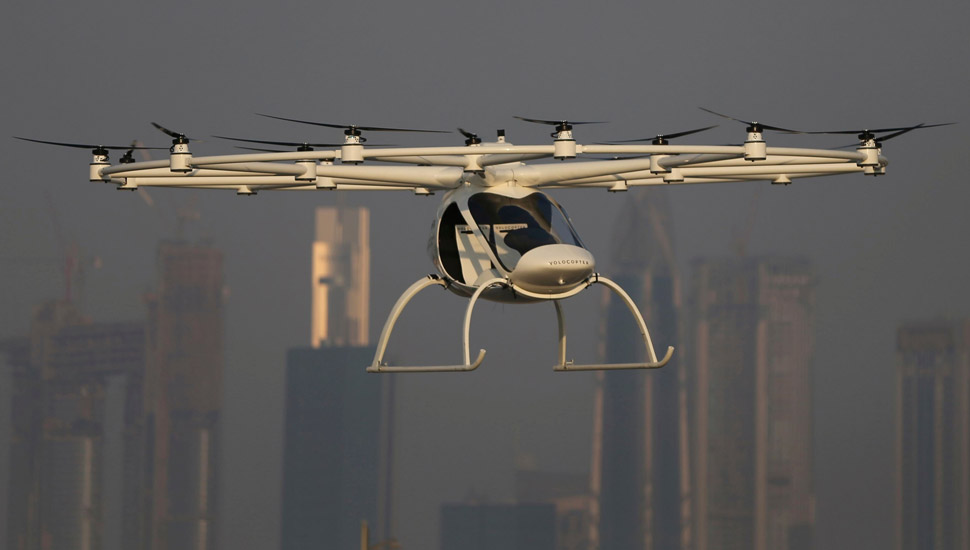 Urban mobility platforms have "the potential to make a very significant change in terms of how society values time", argues Pete Kunz, chief engineer for Boeing NeXt, a "business division building the ecosystem that will define the future of urban, regional and global mobility" set up a year ago. Kunz – whose colleague Mildred Troegeler, Boeing's director global airspace integration, is speaking at the conference – says that, while helicopters have their limitations, new mobility solutions have the potential to become "part and parcel of people's daily lives in an urban environment".

While Kunz will not speculate on a timescale for this new era, he is certain "we will not wake up and find the sky filled with air mobility vehicles". Any change, he says, will be "progressive". The next few years are likely to see demonstrations of various platforms, but any breakthrough will depend on the alignment of three factors: consumer demand, mature technology, and regulatory acceptance from a safety point of view. Industry will have to work with the regulators rather than "trying to force their hand", he says, but the authorities will also have to collaborate to ensure that there are common rules internationally.

According to Harini Kulatunga, head of unmanned aerial mobility solutions at Airbus, a speaker on day one, growing conurbations are one of the main drivers for new methods of travel. "By 2030, 60% of the world's population will be urban. To help cities cope with this massive population growth, transport solutions need to safely and sustainably improve the way people get from A to B," she says. "Urban air mobility enhances the coverage and reach of the transportation system with minimal land impact [and] sustainable city development becomes possible."

Urban air mobility is about more than developing eVTOL platforms, she maintains. "It’s actually a complex ecosystem with critical pieces including designing a safe vehicle, offering the service to passengers, designing a safe ATM system, as well as building infrastructures that integrate with existing transportation modes." As well as having a "long history in designing, manufacturing and certifying airborne vehicles", Airbus is also involved in developing digital ATM solutions as part of its Airbus Urban Mobility initiative, she adds.

When it comes to creating that regulatory infrastructure, the UK's CAA is already "on the front foot", insists Jon Round, head of airspace, ATM and aerodromes, who will also speak on the first day. The authority is working on technology trials with Volocopter and is inviting other platform developers to approach it via the innovation hub on the CAA web site. The biggest challenge for regulators, he believes, will be adapting a "very mature system" and assuring existing airspace users, from airlines to recreational aviators, that "the safety culture that we hold so dear" will never come under threat.

At the EBACE business aviation convention in Geneva in May, Volocopter's chief executive Florian Reuter (his colleague, head of global public affairs Fabien Nestmann is speaking at the Farnborough event), said the start-up's two-seat, 18-propeller, and nine-electric-engine urban air taxi was flying and approaching European Union Aviation Safety Agency certification. He envisages a future where electric-powered aircraft such as Volocopter's will complement larger, traditional business aircraft, flying passengers from airports into and around congested cities.

Another developer appearing at the summit is Vertical Aerospace. The Bristol-based company flew an unmanned version of its battery-powered, four-rotor eVTOL prototype last September and in July this year partnered with Honeywell to use the US group's fly-by-wire technology in a future passenger variant. Also providing an update on its eVTOL concept will be Ilya Khanykov, president of Russian firm Bartini, whose company name and four-seat, four coaxial propeller design is inspired by the Bartini effect, the boost in thrust from mounting counter-rotating thrusters in a nacelle, which was discovered by Italian-Soviet aircraft designer Robert Bartini.

Hosting the first session on day two, on vehicle innovation, is Gwen Lighter, chief executive of GoFly, an initiative to encourage developers of novel airborne personal transport systems, funded by Boeing, Pratt & Whitney and 20 other companies and industry bodies. GoFly culminates in a fly-off in the San Francisco Bay area on 29 February, where more than 40 teams will compete to win the largest in a series of prizes worth a total of $2 million. The fly-off is part of a "multi-day celebration of innovation" involving an air show, exhibition, lectures and workshops.

According to Lighter, a "convergence of breakthrough technologies" including lightweight materials, 3D printing, rapidly advancing sensor technology, and smaller, more powerful batteries are clearing the way for independent businesses to develop a "whole new personal flying industry outside the confines of large organisations", in the way that Silicon Valley disruptors were able to do in social media and e-commerce. She believes that aviation is entering a "golden age" where "a huge white space is opening for innovation".

As in the decades after the Wright Brothers, a flurry of visionary entrepreneurs is likely to consolidate into a handful of harder-nosed companies able to commercialise and industrialise some of these concepts.

Perhaps the most successful disruptors in an emerging urban mobility market will not be new names but seasoned hands such as Airbus and Boeing. Next month's summit will provide an opportunity to assess the potential of the technology, and ponder whether a new dimension in the way we travel across our cities is about to open.