The work with the high-altitude, pseudo-satellite took place in Arizona during three weeks in November, says the company. It looked at areas such as agility, control, and operations. 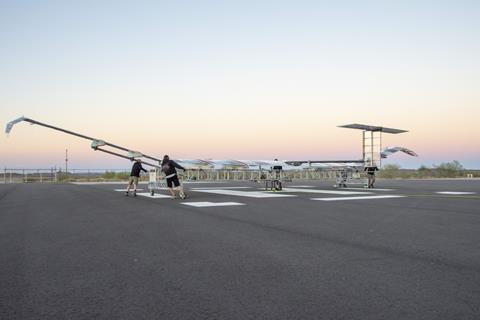 One area of particular focus was flying at lower altitudes and the early stage of transition to the stratosphere.

“Having proven stratospheric flight, we continue to further mature the operational system with the objective to be more flexible and robust in order to meet our customer needs,” says Jana Rosenmann, head of Unmanned Aerial Systems at Airbus.

“The outcome of this campaign is a valuable contribution to the full flight programme next year.”

The company foresees both military and civilian applications for the solar-electric Zephyr, which can operate in the stratosphere for weeks at a time. In 2018, a Zephyr stayed aloft for nearly 26 days, the longest flight of any aircraft without refuelling.

The Zephyr suffered two crashes during 2019 tests in Australia, with both attributed to turbulence. Optimised for operating in the stratosphere, the Zephyr has a 25m (82ft) wingspan but a mass of less than 75kg (170lb).