Aurora Flight Sciences hopes to launch production of up to seven or eight slightly improved versions of the Orion after the medium altitude long endurance unmanned air system broke the official and unofficial records for endurance with an 80h flight.

“We see a number of possibilities” for sales of the Orion, says John Langford, founder of Aurora.

The Orion programme is currently funded by the US Air Force under the Big Safari rapid acquisition office, and Aurora hopes the endurance demonstration will inspire a follow-on production deal.

“People’s opinions change once they see it actually work,” he says.

Other possibilities for the Orion include an emerging commercial market for communications relay, Langford says. Aurora also is positioning the Orion to compete against the Northrop Grumman MQ-4C Triton as an unmanned adjunct to the Boeing P-8A Poseidon.

Ultimately, however, Aurora also is considering launching follow-on production of up to seven or eight aircraft with internal funding. “It is possible that we would do that,” Langford says. “We’ve made no company decision. But we are certainly actively evaluating that.”

The US Army launched the Orion programme in 2007 as a hydrogen-fueled, high-altitude UAS. The project then passed to the Air Force Research Laboratory, and the vehicle was designed to operate at medium altitude with JP-8 fuel an a diesel-powered engine. The AFRL project subsequently moved to Big Safari.

Aurora’s goal all along was to demonstrate that the UAS could fly unrefueled for more than 120h, and the opportunity finally came on 5 December. The aircraft launched around 2 am from Naval Air Station China Lake, California, and landed 80h later, Langford says. 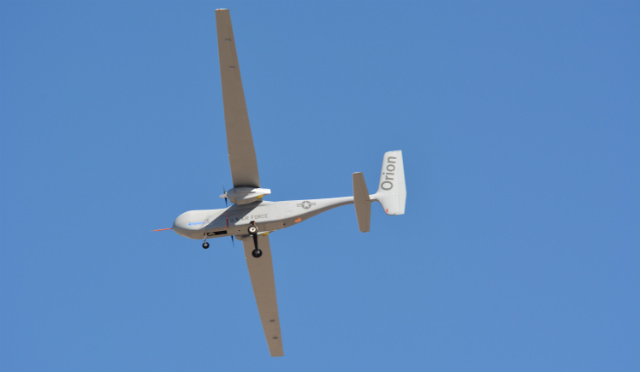 The flight was stopped short only because the Orion’s test window over the China Lake test range ended, he says. The aircraft still had enough fuel on board to fly up to 37h longer, he adds.

The Orion flight still beat the official record of more than 31h of continuous flight set by the RQ-4 Global Hawk in 2001. It also surpassed an unofficial endurance record set by the Boeing Condor programme. Boeing claims the Condor flew continuously for more than 50h in 1988, but the flight was not witnessed by the NAA and is not an official record.

The Orion flight marks the set endurance record claimed by a Langford-led aircraft design. The Daedalus aircraft set the record for a human-powered aircraft with a 72mi flight in 1988.

“The Orion has a lot of the Daedalus DNA,” Langford says.