MBDA is still hopeful its dual-mode Brimstone air-to-surface missile will be carried on General Atomics Aeronautical Systems MQ-9 Reaper unmanned air vehicles, as it awaits requirements that will lead to the next round of testing.

An initial test campaign concluded in January 2014 at the US Navy’s China Lake weapons range in California included nine live firings against moving ground vehicles, all of which resulted in direct hits.

Follow-on testing is yet to take place, although David Armstrong, managing director of MBDA UK, says it is still a priority of the Royal Air Force to integrate it on its current Reapers, or its future MQ-9-derived Protector fleet.

“We’ve been in dialogue with General Atomics and have quoted prices to the customer, but the issue is finding a slot in the heavy duty workload that they have ongoing within the US and UK government Reaper programme,” Armstrong said at the company’s 17 March annual results briefing in London. “We have done the first phase, but it is now [about] getting full clearance on the next phase.

“It is finding the right prioritisation in the programmes. The intent is still there.” 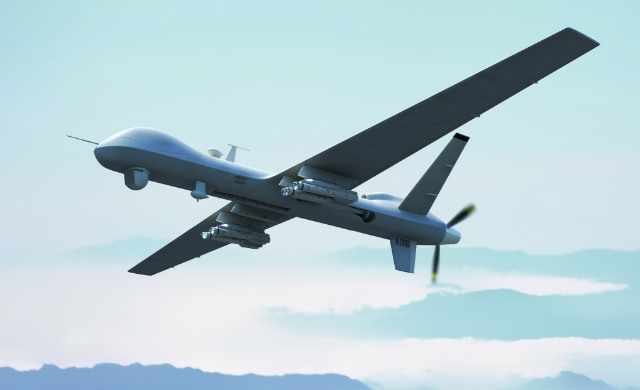 A campaign has been under way to promote the weapon to the USA, a tough market for the European manufacturer due to the strong weapons portfolio offered by American industry.

Antoine Bouvier, chief executive of MBDA, says he is once again optimistic of the potential the company has in this market, with the Reaper being a key target platform for its weapons.

“Last year I was pessimistic… we’d spent a lot of time, resources and credibility focusing on the US… with limited success,” he says. “However, in the past couple of months we’ve seen new opportunities that we are progressing with.”

He says Brimstone is a “logical weapon for the Reaper”, but the US has no overriding requirement for it because it uses the Lockheed Martin AGM-114 Hellfire in the role – as the UK also does.

“I still hope one day it will be on US Reapers,” he adds.

MBDA also hopes to have more involvement in the Anglo-French Future Combat Air System (FCAS) effort that is being studied.

While the company is not one of the six key industrial stakeholders, it has been informing the process and would like to ensure the build of the UAV – a phase that has recently been pledged $2.2 billion – incorporates weapon integration from the outset.

A March meeting between the French and UK governments that saw more funding provided to FCAS also saw an agreement signed to begin a joint concept phase for the Future Cruise/Anti-Ship Weapon programme. This will develop replacements for the MBDA Scalp/Storm Shadow missile that both countries operate, plus the Exocet for France and the Boeing-supplied Harpoon for the UK.

This concept phase would lead to a decision on replacements by 2020, and it is planned for an arrangement for this to be agreed by the end of 2016, and for contracts to possibly be signed by March 2017. Armstrong says MBDA expects the contract to be a three-year development.