A consortium of three British companies has developed a counter-unmanned air vehicle defence system to tackle what it considers to be the “growing threat of malicious UAVs”.

The Anti-UAV Defence System (AUDS) is capable of detecting, tracking and disrupting UAV use within 4.3nm (8km), and is being touted to government agencies that would want to avoid the malicious use of UAVs in situations where VIPs are present, or at large public events.

AUDS consists of a Blighter Surveillance Systems Ku-band electronic scanning radar, Chess Dynamics electro-optical and thermal imaging cameras and tracking software, and an Enterprise Control Systems directional radio frequency inhibitor/jammer. Together they detect, track and jam UAVs within a 180˚ field of view, causing a UAV deemed a threat to land in a controlled manner.

The companies stress that while the system is capable of automatically carrying out much of the mission, human judgement on what is considered a malicious target will always be key. 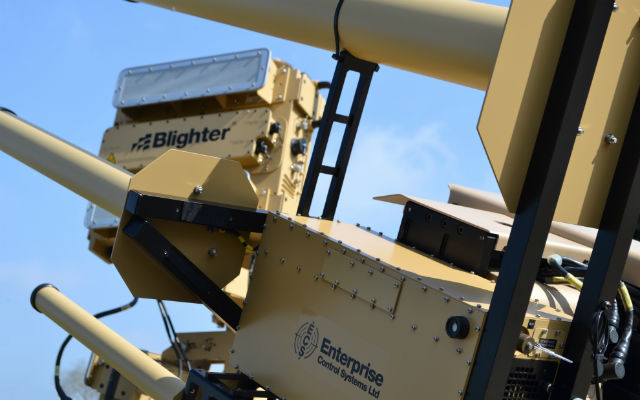 Two series of demonstrations have taken place for the defence ministries of France and the UK in recent months, during which the system showed it was capable of identifying unwanted UAVs and jamming one of several onboard radio frequencies – including GPS, the controls and telemetry channels – against "blind" and "semi-blind" targets.

Some 80h of demonstrations have taken place over 150 sorties, and during these trials other competitors’ systems were also tested. However, the consortium believes that it has “the first product on the market to do all of this”, Mark Radford, chief executive of Blighter, told a media event in London on 18 May.

“We are in active production as we speak to support these trials,” Radford says. “We have conducted European and UK trials, and we’re about to start a series of trials in North America and the Asia-Pacific.”

The system is in the process of being delivered to North America for government-sponsored trials in the USA and Canada.

The companies hope to announce a launch customer for AUDS before the DSEi exhibition in London in September.