AeroVironment and Northrop Grumman will compete to build a Predator-sized unmanned air system (UAS) that can be launched and recovered from a naval patrol vessel, the Defense Advanced Research Projects Agency (DARPA) has announced.

The Tern – a name originally assigned as an acronym for “tactically exploited reconnaissance node” – has no immediate customer lined up, but that’s not DARPA’s goal.

The agency responsible for introducing stealth technology is seeking to deliver a new breakthrough in the UAS market. If either the Northrop or AeroVironment designs prove successful, the Tern will deliver a new level of basing flexibility for a medium-sized UAS that can roam hundreds of miles on missions lasting several hours.

That level of capability has been reserved exclusively to land-based aircraft, such as the General Atomics Aeronautical Systems Predator or Israel Aerospace Systems Heron.

Both contractors will work on preliminary design and risk reduction during Phase 2.

A follow-on award will select a single bidder to build a full-scale Tern demonstrator for ground-based testing under Phase 3 of the programme, DARPA says. 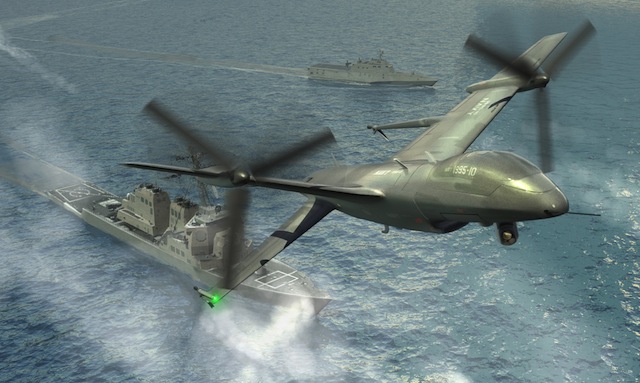 The agency suggests the ground-based testing “would lead” eventually to a full-scale, at-sea demonstration of a prototype vehicle on a destroyer-sized vessel.

DARPA has restricted the bidding teams from revealing most details about their aircraft proposals.

The agency has released an image of an artist’s concept for a notional Tern vehicle. It reveals a tail-sitter, twin-engined design resembling a Predator with a sharply dihedral mid-wing and the Predator’s familiar anhedral stabilisers. The vehicle is shown equipped with a visual sensor.

A dedicated launch and recovery system for the Tern UAS is not visible on either vessel shown in the image. A tail-sitter Tern is shown perched however on the aft helicopter deck of the destroyer, suggesting no catapults or nets are required to launch and retrieve the aircraft.