Chinese manufacturer AVIC Chengdu Aircraft Corporation is showing off its Cloud Shadow strike/reconnaissance UAV at the show, marking its first overseas showing amid a push for export sales.

The turbojet-powered aircraft is the first high-altitude, high-speed UAV produced by the manufacturer and aimed at the export market. It was first revealed at the 2016 Airshow China in Zhuhai. 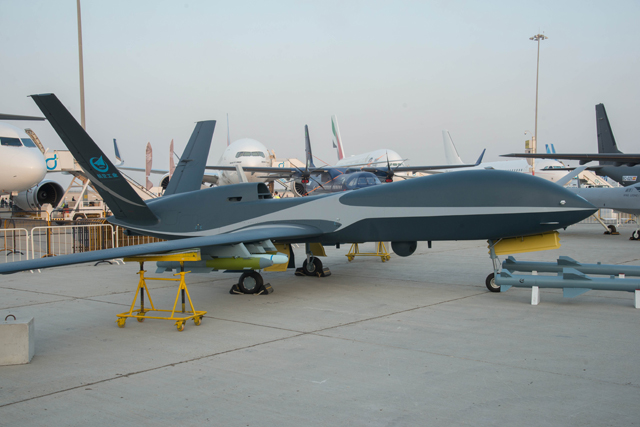 AVIC has brought the armed variant of the aircraft to Dubai, although a second variant is optimised solely for the reconnaissance mission.

In the armed role, the Cloud Shadow can carry up to 400kg of munitions on four or six hardpoints, while it can also be configured with a range of electro-optical sensors and used in search and rescue. Its endurance is up to four hours, and it has an operating altitude of 41,000ft.

Alongside the Cloud Shadow, AVIC is also displaying the propeller-powered Wing Loong I and Wing Loong II UAVs, which are also seeking export sales. Both types have featured at various air shows in recent years, and are increasingly being shown with an array of surveillance and weapons payloads.

The larger of the two platforms, the Wing Loong II, can carry a range of missiles and bombs and has a 20-hour endurance. It has reportedly been sold to Saudi Arabia and Iraq.