The European Defence Agency (EDA) and the European Space Agency (ESA) have begun the second round of a programme that seeks to test using satellite communications (SATCOM) to allow for safe integration of unmanned air vehicles into European airspace.

The €2.6 million ($2.95 million) second round of the Demonstration of Satellites Enabling the Insertion of RPAS in Europe – or DESIRE II – is taking on an Italian flavour, with Telespazio leading the consortium and the Piaggio Aerospace P.1HH Hammerhead UAV being used for the 18-month effort.

The first phase of DESIRE finished in 2013 and was headed on the industrial side by Indra, culminating in a series of demonstrations in Spain that saw an Israel Aerospace Industries Heron 1 controlled via a Ku-band satellite. 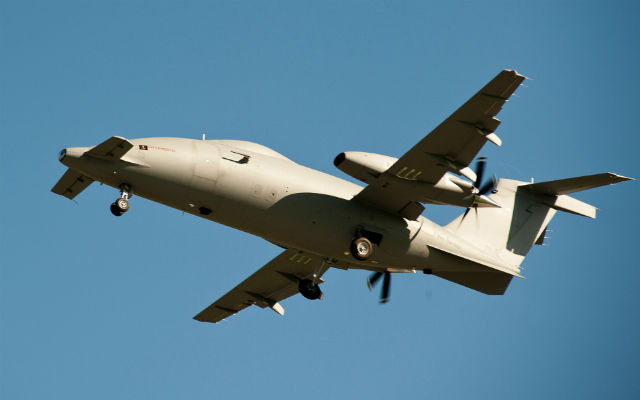 DESIRE II will aim to standardise SATCOM command and control datalinks in different frequencies. These are understood to include the use of K- and L-band frequencies, which will be switched between in order to demonstrate a connectivity back-up, plus longer and more frequent flight tests using the Hammerhead as a flying testbed.

DESIRE II will be also be supported by end users including the Italian coastguard, the Italian civil protection department, Guardia di Finanza, the European Fisheries Control Agency, Ceren and Armasuisse, who will consolidate their operational and regulatory requirements to operate UAVs in non-segregated airspace, the EDA says. This is in line with the target applications of environmental monitoring, maritime surveillance and crisis management that the EDA-ESA team has identified as key.

Out of the €2.6 million project budget, €1.2 million will be invested by ESA, €600,000 by the EDA under its “operational budget”, and €800,000 by the industrial consortium composed of Telespazio, e-GEOS, Selex ES, Piaggio Aerospace, ViaSat, Skyguide and Aedel Aerospace.