A definition study phase for the future European medium-altitude, long-endurance (MALE) unmanned air vehicle development has begun, paving the way for an operational sovereign system to enter use by 2025.

In May 2015, a declaration of intent was signed by the French, German and Italian governments, establishing a route towards the two-year definition phase. Now, industry representatives from each nation – namely Dassault, Airbus Defence & Space and Leonardo – will share the work evenly.

A development phase will begin in 2018 leading to the first flight of a prototype in 2023, and deliveries of the armed UAV in 2025.

The programme was once named MALE 2020, but after being set back by five years it is now being referred to as the European MALE RPAS (remotely-piloted air system) programme. Spain has also joined the initiative, in an observational role.

The latest MALE effort began during the Paris air show in 2013, when the companies involved called on their respective governments to invest in the development of a sovereign European system. This, they argued, would end the nations' dependence on products like the US-built General Atomics Aeronautical Systems Predator/Reaper family of UAVs.

The new definition phase was kicked off during a meeting chaired by the Organisation for Joint Armament Cooperation, after which the companies said that air traffic integration and certification for the dense European airspace are key objectives of the development. 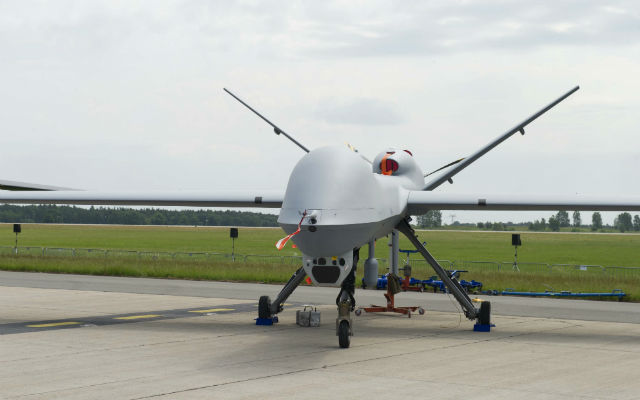 The US-built MQ-9 Reaper: pitched to Germany at the ILA Berlin air show in June

“This is a significant milestone for the European defence industry,” says Leonardo chief executive Mauro Moretti. “At a time when Europe is debating how to address the issue of sovereignty and technological autonomy of new-generation remotely piloted systems, Leonardo-Finmeccanica is ready to play a leading role.

“We have developed technologies and applications in platforms and sensors which have contributed to the development of a new generation of aircraft systems, allowing Europe to reduce its growing dependence on equipment produced outside Europe."