The Israeli air force (IAF) is phasing out its Israel Aerospace Industries Sea Scan 1124 maritime patrol aircraft, with the company’s Heron 1 unmanned air vehicle set to take over in this role.

The three-strong Sea Scan fleet has become costly to maintain, so persistent maritime patrol missions will instead be carried out using the maritime version of the Heron 1.

While the navy may still opt to equip its former US Navy-operated Sikorsky SH-60F Seahawk rotorcraft with new maritime radars, the everyday work will be performed using the Heron 1.

He adds that by using an advanced electro-optical payload – the MOSP made by the Tamam division of IAI is used on the Heron 1 – and the Elta ELM-2022 lightweight airborne maritime surveillance radar, the UAV can perform all the required missions.

"The radar can track hundreds of targets simultaneously from ranges of 200m, and the optical payload is then used to zoom in on the one that looks like a threat," Bichman says.

He adds that for maritime patrol missions, by carrying the radar and the electro-optical payload, the Heron 1 has a 20h endurance.

Bichman notes that while the IAF is acquiring more maritime Heron 1s, other customers around the world have also identified the advantages of this UAV in a maritime patrol mission. "We are just now negotiating the sale of this Heron 1 version to some foreign customers,” he says. 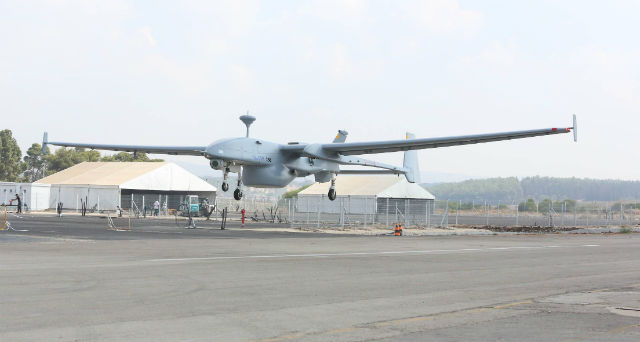 Meanwhile, the German air force has carried out the first mission using its newly acquired Heron 1 in Mali.

Deployed just three months after the air force signed for the system, the maiden operation in Mali was carried out on 1 November from Gao airport, operating for 5h 40min.

The system is leased from IAI and operated by Airbus Defence and Space.

In July, the Bundeswehr took over responsibility for the intelligence unit in Mali from the Netherlands, where it is carrying out surveillance in support of the United Nations Multidimensional Integrated Stabilization Mission in Mali.

The West African mission is scheduled to continue until February 2018.