Northrop Grumman confirms that a previously unpublicised design concept for an apparently stealthy aircraft was revealed in a photograph as part of a Los Angeles Times newspaper articleabout a top company executive.

The model appears in the background of a photograph published on 1 September showing Chris Hernandez, vice-president of research, technology and engineering for the Aerospace Systems sector, in his office, which is decorated with multiple models of many of Northrop’s most advanced aircraft, including the B-2, Proteus and the RQ-4.

In the upper-right of the photograph, a model atop a bookcase appears similar in some ways to the cranked-kite shape of the unmanned X-47B, but seems to have a significantly longer fuselage and extended outer wing sections.

“It’s a concept model from a few years ago,” a Northrop spokesman confirms to FlightGlobal. No further details about the aircraft’s design or features were released.

A Northrop patent approved earlier this year by the US government uses a design for a similar-looking aircraft. The patent filing involved a claim of intellectual property for a different technology -- an air-launched miniature self-defence munition. The stealthy aircraft design appeared to be incidental to the weapons technology that was the subject of the patent. 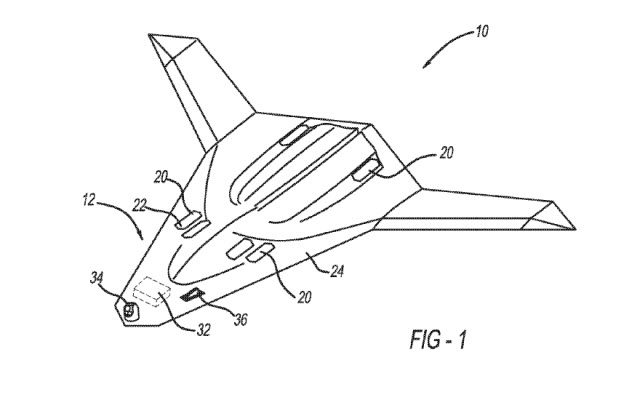 The US Air Force has released a rendering of an apparent likeness of the developmental B-21 Raider, but it’s exact design remains unknown. There have also been reports that Northrop developed a secret high-altitude surveillance aircraft for the US Air Force, which has been dubbed at least popularly as the “RQ-180”.

In the previous decade, Northrop also engaged in a long series of design studies for an aircraft concept called SensorCraft, which used load-bearing radar antennas integrated into the aircraft skin to maximise aperture size in proportion to the size of the aircraft. Although Northrop studied multiple concepts and built full-scale component rigs for tests, it’s not clear whether the technology was pursued beyond the demonstration stage.