The Royal Air Force has deployed its Boeing E-3D Sentry airborne early warning and control aircraft in support of the UK’s contribution to the mission to counter Islamic State terrorists in Iraq.

Joining an array of RAF aircraft already deployed from RAF Akrotiri in Cyprus, the aircraft was delivered on 27 January from its usual stationing with 8 Squadron at RAF Waddington in Lincolnshire. It will join aircraft from the 903 Expeditionary Air Wing that is operating in support of the counter-insurgency mission.

“As well as providing an airborne command and control capability, the Sentry offers a valuable ability to direct and co-ordinate the huge coalition air effort and will remain in Cyprus for the next few months,” the RAF says.

The air force says that it will operate over both Iraq and Syria, although the UK’s role in Syria is currently limited, with no offensive air strikes permitted, in accordance with a parliamentary mandate.

A fleet of RAF aircraft – including the Panavia GR4 Tornado, General Atomics Aeronautical Systems MQ-9 Reaper unmanned air vehicle and a supporting AirTanker Voyager air-to-air refuelling aircraft – have been carrying out seemingly daily strikes in Iraq in support of the US-led coalition effort against IS. 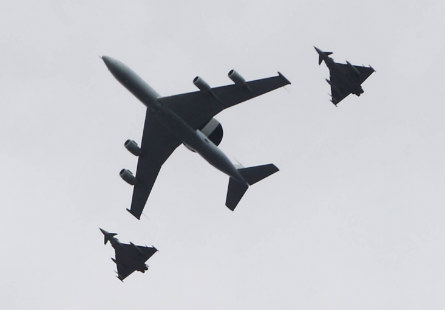 The Sentry is derived from the Boeing 707-320B aircraft, which is modified to incorporate a variety of mission systems, and maintains an endurance of some 11h, although this can be extended by utilising the Voyager.

Based with 8 and 23 squadron at Waddington, the RAF operates seven of the aircraft. It is also currently being utilised for NATO’s Baltic Air Policing mission that aims to deter illegal Russian flights in eastern European NATO airspace.

Meanwhile the former chief of the general staff, Richard Dannatt, has suggested that air strikes against IS may alone not be enough, and the British Army could have to deploy in support of the effort if it is determined that the “mission is right” but “everything else fails”.

“That was 10 years ago and we’re still having to make a lot more progress, so this is going to take time,” Dannatt notes, claiming that a debate may need to be had on whether a “least worse option” would be to provide ground troops.

When it was decided in September that the UK would join the air strike campaign, Prime Minister David Cameron was quick to note that British ground troops would not deploy alongside the RAF aircraft.