The commander of the Royal Netherlands air force hopes to resolve the funding challenge that the planned purchase of the General Atomics Aeronautical Systems MQ-9 Reaper unmanned air vehicle (UAV) has seen, despite it not yet being allocated in the 2016 defence budget.

A request for the $339 million sale was authorised by the US Defense Security Cooperation Agency in February 2015, and Lt Gen Alexander Schnitger told Flightglobal he is confident that the funds are to be found in 2016, and that the RNLAF is exploring a number of options to find the financing for the buy.

“We have firm plans. Everything is in place, but we had to slam the brakes on because we could not allocate the money at that time when we needed it,” Schnitger said. “I hope to get a resolution on the money…that is my goal.”

He explained that the RNLAF looked at “the whole offering of medium-altitude, long-endurance UAVs” before selecting the Reaper, and also said that it was not very difficult to arrive at that conclusion.

“We are already involved in UAV operations in various ways, shapes and forms, so it is not completely new to us,” he added. “Once I get the systems, I think we will be able to quite rapidly grow into an initial operating capability, at least, that we can push out and put to some good use hunting down the bad guys.” 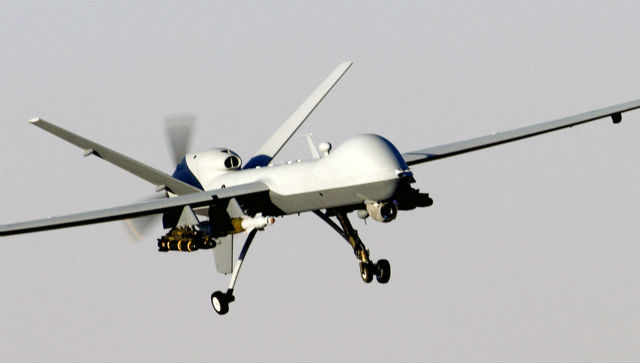 A US Air Force Reaper

The authorisation from DSCA was for four surveillance-only MQ-9 aircraft, which would fall under one system, Schnitger said.

“We always had the [plan] to start with one and learn the ropes with it,” he added. “Some of the technological advances and innovation in technology is developing very rapidly, and I have become a firm believer in small rapid programmes that will provide a capability quickly and then a quick evaluation on if it works.

“Buying large numbers of anything and then being stuck with them is very rapidly becoming an obsolete model of capability acquisition. We have to be flexible, agile and quick to use the latest and the greatest.”

There are plans for the RNLAF to join the other Reaper operators in training at the US Air Force’s Holloman AFB in New Mexico, which Schnitger says is still the case, and talks would resume with the US government on this once a contract is signed.

“That is the plan that we still have, but it slides a little bit to the right,” he said. “At the right moment we will have to revisit our talks with the US air force to see whether they have slots for us in specific time periods, but I suspect that it will happen.”