A modern fighter will play the starring role in any air force of merit. With advanced sensors, powerful engines, heavy payloads, and a range of high of specification capability, the modern fighter is an impressive feat of engineering and a potent symbol of power. Yet this comes at significant cost, both at the acquisition stage and with longer term sustainment. But for air forces that don’t have pressing high end missions in areas such as aerial supremacy, deep strike, or long-range standoff attacks, there is a plethora of lower end solutions in the form of light attack jets based on trainers.

A modern fighter will play the starring role in any air force. With advanced sensors, powerful engines, heavy payloads and a range of capabilities, today's combat aircraft are impressive feats of engineering and a potent symbol of power. Yet this comes at significant cost – both at the acquisition stage and in terms of sustainment. So for air forces that don’t have a pressing need for high-end capabilities such as aerial supremacy, deep strike or long-range standoff attacks, there is a plethora of lower-end solutions available in the form of light attack jets based on trainers.

South Korea’s contribution to this market is the Korea Aerospace Industries (KAI) FA-50, which is steadily replacing legacy types such as the Northrop F-5 in service with the Republic of Korea Air Force (ROKAF). The FA-50 also returned the Philippines to the fast jet club when Manila ordered 12 examples in 2014 – its first jets since the retirement of its F-5s in 2004. KAI has also sold weaponised variants of the T-50, upon which the FA-50 is based, to Indonesia, Thailand, and Iraq. Argentina is reportedly on the verge of ordering 12.

At the Paris air show in 2017, Leonardo unveiled its answer to the FA-50: an attack jet based on the M-346 advanced jet trainer, the M-346FA. Powered by two Honeywell F124s, the M-346FA has a MTOW of 10,400kg, just below that of the FA-50. As with the Korean jet it can carry a range of ordnance including short and medium range air-to-air weapons, as well as precision guided munitions.

In July, Leonardo said it had secured a launch order for six M-346FAs from a major “international customer". Subsequently, the company said that the M-346FA could achieve service entry in 2021, and that certification and integration work was ongoing. Separation tests of bombs and air-to-air missiles, including the AIM-9L Sidewinder, have already been performed, with integration of the Grifo fire control radar and updated avionics under way.

In the past both KAI and Leonardo stated that they are talking to several countries – the M-346FA is also seen as contender in Argentina. While there is a clearly a business case for the firepower and speed offered by smaller jets, views vary on the size of the market.

“It's difficult to break out [the light attack jet] market specifically, because many of the jet trainers bought today are either delivered with the ability to handle weapons or can be easily converted to the role,” says Forecast International analyst Douglas Royce. “Over the past 30 years or so, the market for light attack versions of jet trainers has been much smaller than that of jet trainers.”

He estimates that attack variants comprise around 10-15% of the overall jet trainer market. As for the advantage such aircraft offer over fighters, he says: “The primary advantage is lower acquisition and operating costs. It's much cheaper to run an armed trainer than it is to run a fighter.”

Leonardo forecasts a market for light attack jets of around 1,300 aircraft, excluding Russia and China, for the next 20 years. This excludes aggressor, red air and adversary air roles, for which it believes the light attack version of the M-346 is well suited.

Czech manufacturer Aero Vodochody, which produces the L-39NG – a trainer with light attack capability – as well as the L-159 attack jet, puts the market at 700 units over the next 10-15 years, excluding the US market and the USAF’s O-AX requirement for light attack aircraft. It notes that its L-159 Alca has seen combat success with the Iraqi Air Force in operations against Islamic State. It adds that the type is inexpensive to acquire, operate and maintain, with the ability to operate from unpaved runways and in “extreme climate conditions". The L-159 is also operated by Draken International in the adversary role.

Offered in single and twin seat variants, the L-159 can carry external stores of 2,700kg, including air-to-air and air-to-ground weapons as well as targeting and electronic countermeasures pods. The company recently delivered three L-159T2 prototypes to the Czech air force. This is a twin seat version with upgrades including new multi-function displays, night vision capability, and an improved ejection seat. Longer term, it proposes a more capable F/A-259, which will include an upgraded F124 engine.

Other trainers promoted with light attack capability include the Yakovlev Yak-130, the AVIC Hongdu L-15, and the AVIC Guizhou FTC-2000G. Based on the FTC-2000 trainer, the FTC-2000G has seven hardpoints and is aimed at air forces in the developing world. The variant made its public debut in the static park of Air Show China in Zhuhai in November 2018, appearing amid an impressive range of air-to-air and air-to-surface weapons such as the SD-10 semi-active air-to-air missile (the export variant of the PL-12), the CM-102 anti-radiation missile, and various guided and non-guided bombs. A promotional video from 2011 used footage from the film Top Gun to show the (then conceptual) FTC-2000G in air-to-air combat.

The sector could also receive the attention of Boeing in the form of its T-X trainer. At the Paris air show in June, Boeing vice-president Thom Breckenridge reiterated the view held by Boeing and programme partner Saab that the T-X could sell up to 2,600 units over its lifetime. This includes 1,000 examples for the US military, with the balance sold to foreign air forces. While not specifically stating light attack as a specific opportunity for the type, Breckenridge said the T-X offers development potential that would allow it to perform other missions beyond its advanced jet trainer functions.

However impressive the field of contenders, it is important to recognise that light attack jets are by no means fighters. While the arrival of the FA-50 was a pivotal development for the Philippines, for example, there are few illusions that it would help Manila wrest aerial supremacy from the Peoples’ Liberation Army Air Force (PLAAF) in any conflict over the South China Sea, where the two countries have opposing territorial claims.

The USA’s OA-X requirement is in many ways a quest to find a cheap way to apply airpower in low-intensity combat zones, and Aero Vodochody also sees this as a clear market. “In the majority of current conflicts, where multirole supersonic aircraft are mainly tasked with medium-altitude precision bombing missions, this represents clear overkill. We believe that significant part of the combat mission could be downloaded to light, smart and multirole aircraft in the L-159 category.”

Forecast’s Royce lists the many disadvantages light attack jets have compared to fighters, including the lack of capability to handle the full range of air-to-air and air-to-ground scenarios.

“They typically lack the ability to conduct [beyond visual range] combat, have inferior sensors compared to modern fighters, and carry less ordnance. And that's comparing them only to something like the Gripen or F-16. What armed trainers have going for them in the modern environment is the ability to combine a decent sensor package with precision-guided ordnance, along with a limited air-to-air capability for nations that can't afford the cost of maintaining a large fighter fleet.”

He also points out that armed turboprops such as the Embraer A-29 Super Tucano and Textron AT-6 Wolverine offer similar capability. “So really the only reason you would select this kind of aircraft is because you need that higher load and speed that jet power provides.”

This year’s Seoul International Aerospace & Defense Exhibition will again offer KAI and South Korea the opportunity to promote the FA-50 to an international clientele, some of whom may feel that "real" fighters offer too much capability for practical requirements. Without specifying the size of the light attack market, KAI says it wants to attain a 30% market share. The FA-50 is by all accounts an effective aircraft, but it has its work cut out for it in a crowded market. 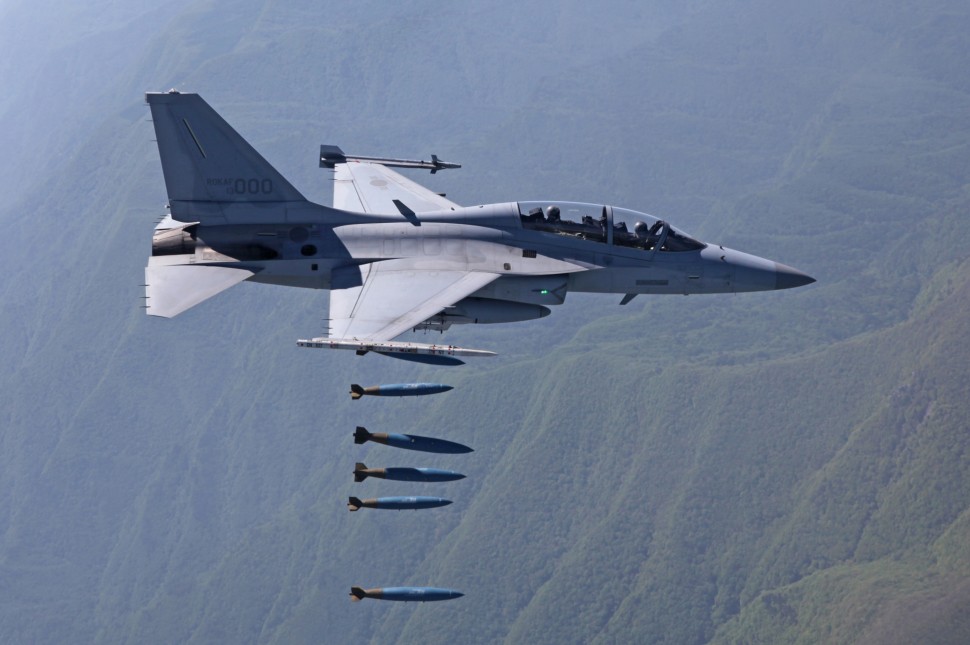