Its research into attack options for the Surion reflect local requirements such as a Korean Marine competition for 24 attack helicopters, as well as international opportunities. KAI says militaries in the Asia-Pacific are interested in utility helicopters that can also carry precision weapons.

The company’s stand features a civilian Surion with a mock-up of a weapons mount. Vertical arms mounted on the upper fuselage behind the rotorcraft’s sliding door are depicted carrying weapons such as four Lockheed Martin AGM-114 Hellfires on each side, rocket pods, and gun pods.

The nose of the helicopter has a bulged nose for a weather radar. This can also be configured for an electro-optical/infrared (EO/IR) sensor, which would be essential for identifying targets and guiding missiles. 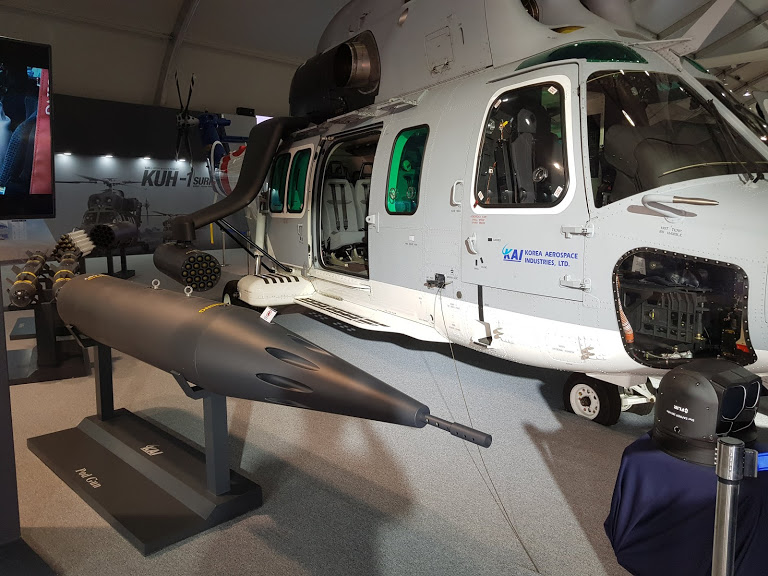 One concept for an armed Surion features canted arms mounted aft of the doors.

A model on the company’s stand depicts an even more heavily-armed version. The nose features an EO/IO sensor and a 20mm rotary cannon in a chin mount. Stub wings mounted forward of the door can carry anti-tank missiles such as Hellfire or Spike, pods for 2.75-inch rockets, and IR-homing air-to-air missiles.

The company is conducting feasibility studies into both Surion attack concepts. It will develop both ideas to a certain level, but further work will depend on customer interest either locally or from overseas.

There are no plans for a first flight with either configuration, as this again depends on the market response. 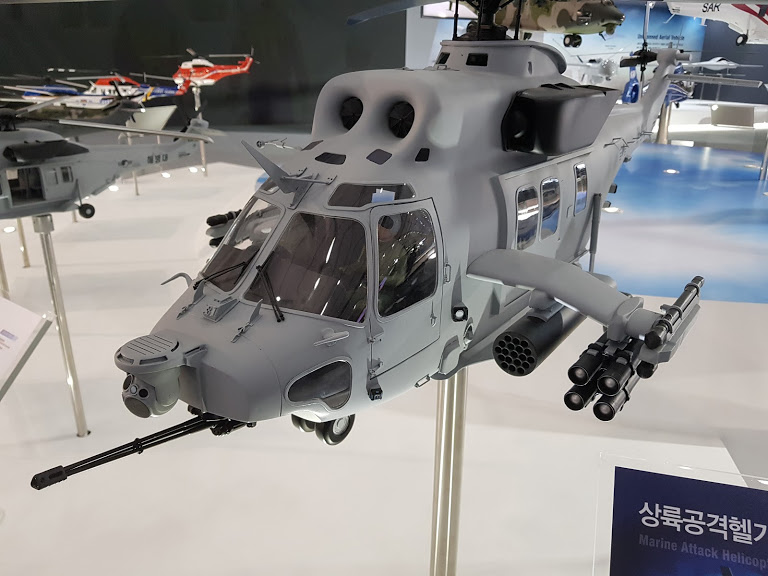 Apart from attack feasibility studies, the company has also worked to upgrade the existing Surion product, with new avionics, a better door mechanism, and other improvements.

Separately, this year’s ADEX saw the flying debut of the new Light Attack Helicopter (LAH). It performed a range of manoeuvres before VIPs at the show’s opening ceremony. The appearance came just three months after the LAH’s maiden flight on 4 July.

The prototype of the new rotorcraft is based on the Airbus Helicopters H155 and powered by a new Safran engine, designated the Arriel 2L2, which is the most powerful variant in the Arriel family.

KAI is also developing a Light Civil Helicopter based on the same platform.