The Shenyang J-16D electronic warfare (EW) aircraft and a Chengdu J-20 fighter with an indigenous engine have made their debuts at Airshow China in Zhuhai.

The J-16D is understood to perform a similar role to the Boeing EA-18G Growler in the electronic attack role. 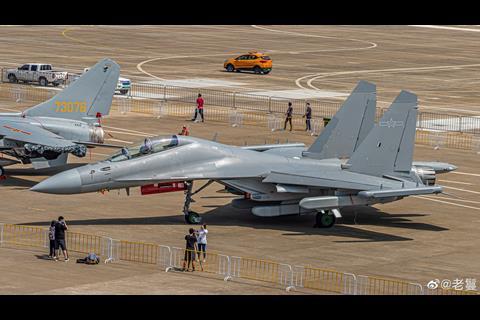 The J-16D features a distinct wingtip pods similar to its American counterpart, the EA-18G 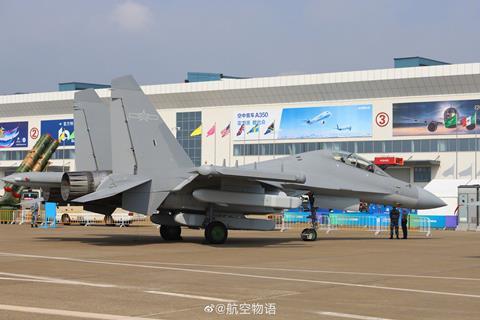 The J-16D has a somewhat shorter nose than the baseline J-16, and dispenses with the IRST sensor in front of the cockpit 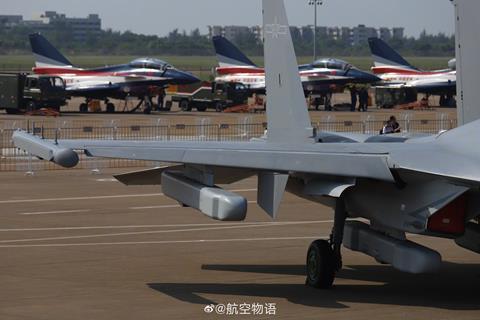 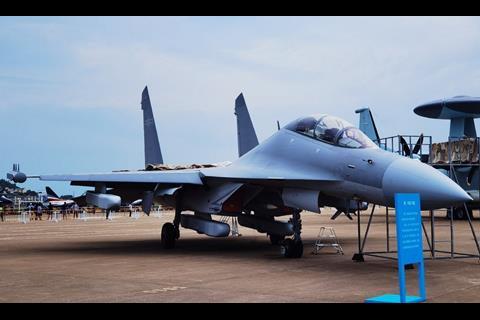 The aircraft is on static display at the show, which runs from 28 September to 3 October. The show was originally supposed to be held in November 2020, but was postponed due to the coronavirus pandemic.

Images on Chinese social media show the J-16D equipped with its signature wingtip pods in place of the baseline J-16’s missile rails. It also carries four jammer pods, one under each wing and two located on cheek stations beneath the aircraft’s two Shenyang WS-10A engines.

The other pods likely contain equipment to jam enemy radars in different frequency bands. The USA’s next generation jammer (NGJ) programme, for example, will replace the EA-18G’s ALQ-99 with distinct jammer pods to counter radars in the low-, mid-, and high-frequency bands.

In operational service, the J-16D should give the People’s Liberation Army Air Force strong capability against enemy air defence systems. In addition, Beijing has developed an electronic warfare variant of the J-15, designated J-15D, for use aboard Chinese air carriers.

The J-16D features several differences from the baseline J-16, including a somewhat shorter nose, the removal of the infrared search and track sensor in front of the cockpit, and the omission of its 30mm cannon.

The aircraft on static also has two-missiles mounted in tandem on its centreline, that appear to be PL-15 long-range air-to-air missiles.

The J-20 powered by the indigenous WS-10C engine

Also making its debut at this year’s show is a J-20 powered by the WS-10C Taihang engine. While the J-20 appeared at the 2016 and 2018 shows, these aircraft were powered by Russia’s Saturn AL-31FN. While the J-20 is performing a flying display, there are no images showing it in the show’s static park.

If past iterations of Airshow China are anything to go by, little will be revealed about the status of equipping the J-20 with its ultimate engine, the WS-15 Emei. Chinese airpower observers believe the J-20 will only reach its full potential when it is mated with the more powerful WS-15.

This year’s show also appears to mark the debut of an export version of the PL-15 designated the ‘PL-15E.’ A photo of an information card at the show appeared on Chinese social media, showing the PL-15E’s maximum range at 78nm (145km).