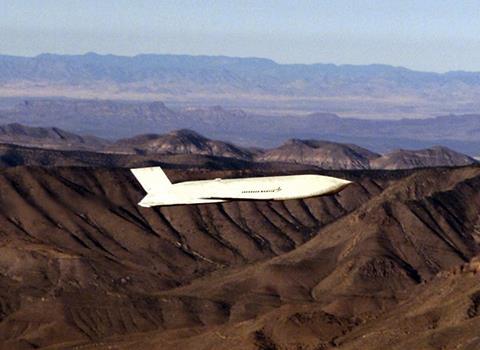 “These world-class strike weapon systems will equip our forces to better protect Australia’s maritime approaches and when necessary, contribute to Coalition operations in our region. The JASSM-ER will enable the F/A-18F Super Hornet, and in future the [Lockheed] F-35A Lightning II, to engage targets at a range of 900km.”

According to Lockheed’s JASSM-ER fact sheet, the weapon has a 500nm (926km) range, uses an infrared seeker to engage targets, and carries a 454kg (1,000lb) warhead.

“JASSM-ER shares the same powerful capabilities and stealthy characteristics of the combat-proven JASSM, but with more than two-and-a-half times the range,” says Lockheed.

The company also highlights the weapon’s accuracy and resistance to the jamming of Global Positioning System signals.

“These two companies, along with their US-based parent companies, are the largest suppliers of guided weapons to [the Department of Defence],” says Dutton. “We will be working with them to rapidly increase our ability to maintain and manufacture guided weapons and their components in Australia.”

Beijing’s massive arms build-up, including an aggressive naval expansion, has seen Canberra work to beef up its military, with an emphasis on long-range capabilities.